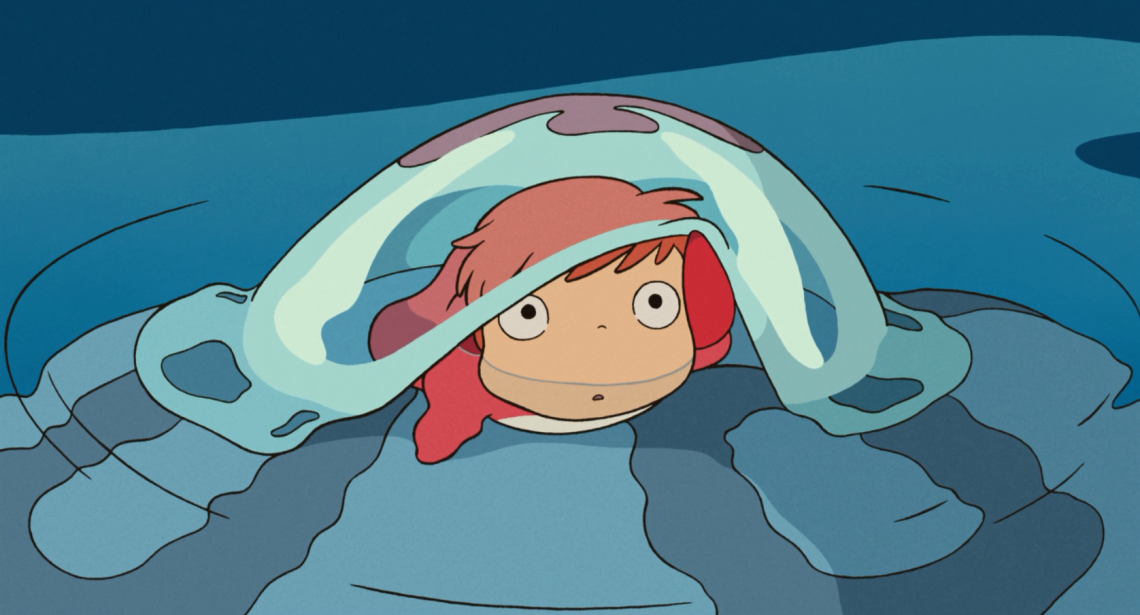 At this point in the retrospective, Studio Ghibli has been somewhat capitalizing on its international success by choosing distinctly western fictions to adapt, their last two films Howl’s Moving Castle and Tales From Earthsea being adaptations of distinctly British fantasy novels. So naturally, it’s only fitting that they’d bring that trend to its most logical evolution by (very loosely) adapting a full-blown western fairy tale, The Little Mermaid. And yet despite the clearly western material they’re working with, Hayao Miyazaki’s Ponyo is actually a return to the more Asian weirdness and surrealism that some of the Studio’s earlier films like Pom Poko and Spirited Away were characterized by.

A far-cry from both the original fable and the Disney version of The Little Mermaid we’re all familiar with, Ponyo is about a little goldfish girl named Ponyo who falls in love with a human boy named Sosuke and sets out to become human just like him by running away from her wizard father. In doing so, however, she creates an imbalance in nature, causing a massive tsunami to hit Sosuke’s hometown and inadvertently begin a new Oceanic era, just like in prehistoric times — we can argue about how accurate the science of this movie is when it becomes relevant, which is never.

Especially when compared to his other works, this is the lightest and fluffiest film to come out of Miyazaki in his entire career. Even his most adorable film, My Neighbor Totoro, is rife with a deeply melancholic undercurrent of emotion. Ponyo, by comparison, is primarily concerned with being as adorable as its protagonist, so much so that the darker, subtextual themes that Miyazaki usually likes incorporating into his work are very, very, very subtly implied here to the point that it’s in contention whether or not these themes have any actual bearing or meaning on the story. 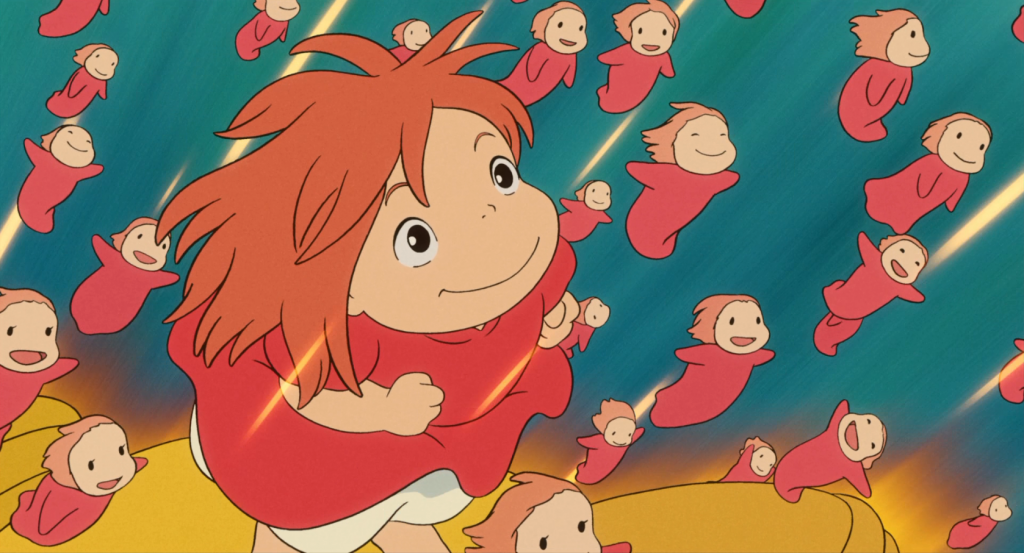 Ponyo‘s extremely light-hearted approach allows Miyazaki a kind of manic energy and freedom here that isn’t as present as in a more serious work like Howl’s Moving Castle. Ponyo may actually be his most experimental film, which isn’t saying much considering how confidently traditionalist his storytelling tends to be, but because his story is so simple and all the more mature angles are further down the sidelines, he’s able to really indulge and experiment in his form and visual style.

Whereas Miyazaki’s other works had a style of heightened realism, as his surreal and heavily detailed characters and visuals were placed against a relatively realistic watercolor backdrop, Ponyo is like a cross of storybook and coloring book: environments are not realistic watercolors, but made up of exaggerated proportions and a mix of colored-pencils and crayons, while the colors are the most vibrant and eyepopping of his whole career. While the story may be inspired by The Little Mermaid, the visuals look more like something out of The Beatles’ Yellow Submarine with its extremely bright color palette and almost play doh-like way of movement (the scene of Ponyo chasing Sosuke while riding on a series of fish-shaped tidal waves might be the most stunningly fluid piece of animation Miyazaki and his team of animators have ever accomplished). It’s as close to the more visually experimental Takahata that Miyazaki has ever gotten, and you could feel that sense of freedom all throughout Ponyo. 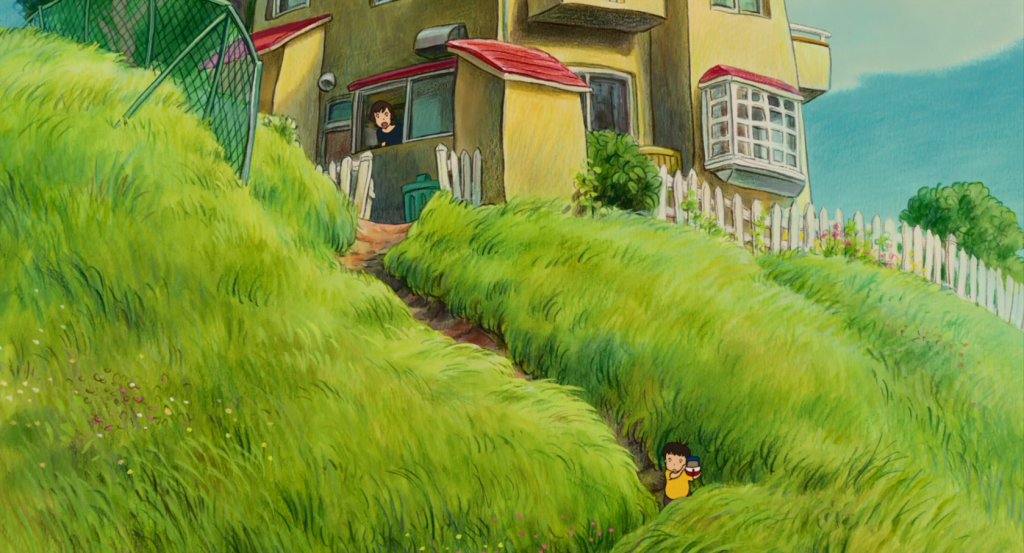 With an emphasis on the ocean replacing his usual fixation on the sky, Miyazaki returns to the more ecological themes that weren’t present in his post-Mononoke films. Ponyo isn’t as much of a nature-parable as Mononoke was, but it plays a much larger role than it did in Spirited Away and Howl’s Moving Castle. There’s a plethora of background details that contribute to this — whenever we see Ponyo or her father swimming around in the opening scenes, they have to dodge all sorts of trash and waste to get to where they need to — but they’re never given too large a focus to be seen as critical or judgmental. The only critical examinations of humanity and nature come from Ponyo’s father, who explains how he was once human before he saw how the rest of his race treated the ocean, bringing him to commit himself entirely to the sea. These scenes are more transparently preachy than Miyazaki’s usual sort, but they’re extremely brief, and it’s not like Miyazaki displays or harbors that same negativity towards the humans of the film.

The closest Miyazaki gets to truly dark material is the tsunami scene, which already has shades of real natural disasters to it, but can you imagine the cultural shitstorm that would’ve been raised if Ponyo had been released in 2011, during the devastating earthquake/tsunami that actually hit Japan and caused high amounts of destruction?

Ponyo, as a character, may be adorable on the surface, but that cuteness is what conceals the fact that she’s a literal force of nature. When she causes the tsunami, she literally has no idea of nor can even conceive of the destruction she’s caused (and this being a G-rated movie, nobody appears to have been hurt or killed in the process). You almost wanna say she’s representative of nature’s cold, relentless, unsympathetic being, except Ponyo is anything but. Rather, she is just so filled with joy and innocence that she simply doesn’t have the capacity to understand how her own nature affects those around her. 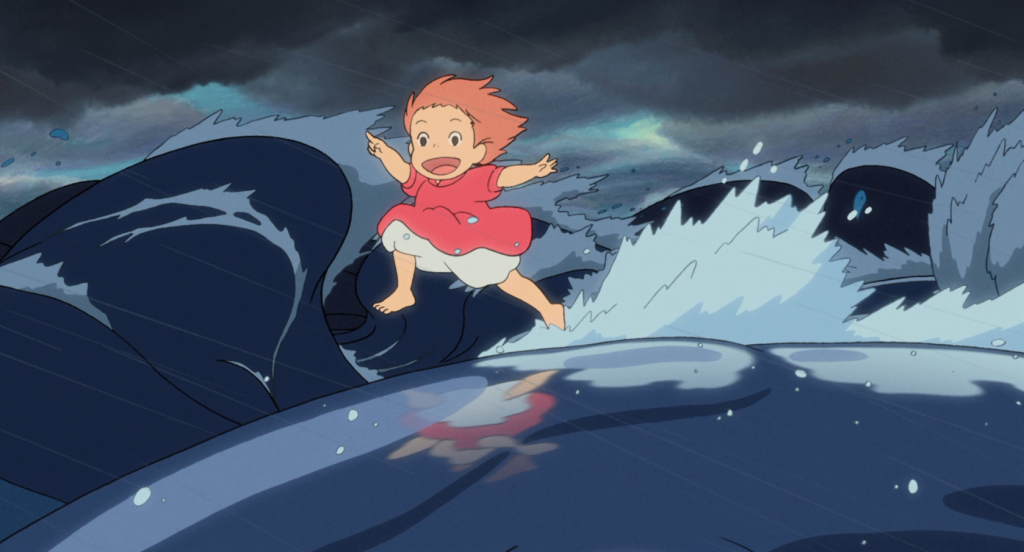 There’s a rather calculated inconsistency and imbalance betwen Miyazaki’s depictions of the human and oceanic worlds of Ponyo. Rather than an environment in which one is subjugating the other, the two factions are so exclusionary, as if confined to their own little bubbles, that what makes their eventual overlap jarring isn’t that it was out of malicious intent, but rather that they simply can’t conceive of existing together. So when Ponyo becomes a character that occupies both sides, she becomes a character of balance that also seems to represent imbalance.

The entire concept of Ponyo as a character is peculiar, to say the least. Her innocence hides a powerfully destructive quality. Miyazaki never once displays her power in a lens of horror or even awe. If anything, the tsunami is one of the most beautiful, joyful sights we see in the whole film because it is tied to Ponyo’s own joy. The peculiarity of that joy is Miyazaki’s (intentional) ignorance of its consequences, and how its undercut by the destruction that affects the rest of the characters later on.

Ponyo herself is designed with a slight but still very noticeable layer of creepiness as well. Her ability to transform from fish to human comes from the fact that she literally tastes Sosuke’s blood after licking a cut on his thumb. When she transitions from fish to human, she grows intentionally ugly looking feet and hands that look like a cross between frog legs and chicken feet. These appendages evolve into more human-like hands and feet, but even in human form, she can do things no other human can or should do, like walk on water, turn a toy boat into a lifesize one, power a generator through sheer willpower, etc. She’s like a more flawed, dangerous version of Pippi Longstocking, red hair and everything. 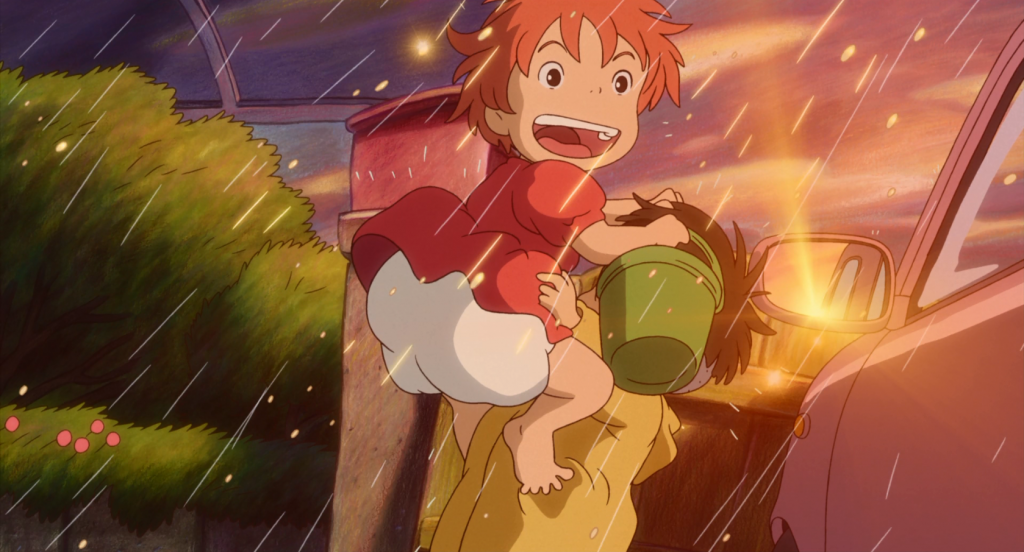 Ponyo is herself an imbalance and a representation of natural balance; as much a contradiction as the world she lives in. That Miyazaki can convey that imbalance without losing the film’s delightful qualities or needlessly delving into overbearing darkness is rather impressive. The film eventually ends with Ponyo and Sosuke saving the world by professing their love to one another, which allows Ponyo to change into a human for good, and thus restore the actual balance so that nature and humanity can coexist. These themes aren’t as profound as Miyazaki’s other works, but the fact that an animated children’s film like this actually has the brains to go for larger, resonant, and culturally specific themes is worth congratulation.

Unsurprisingly, Ponyo was a big hit in Japan, and even made its fair share in western theaters as well. It also happened to be important as yet another critical hit as well after the Tales From Earthsea fiasco sullied the Studio’s usually consistent critical reactions. This was especially important considering their next film was yet another risk with an untested animator from the studio making their directorial debut at the Studio. Next week, a new director and a new film with The Secret World of Arietty. 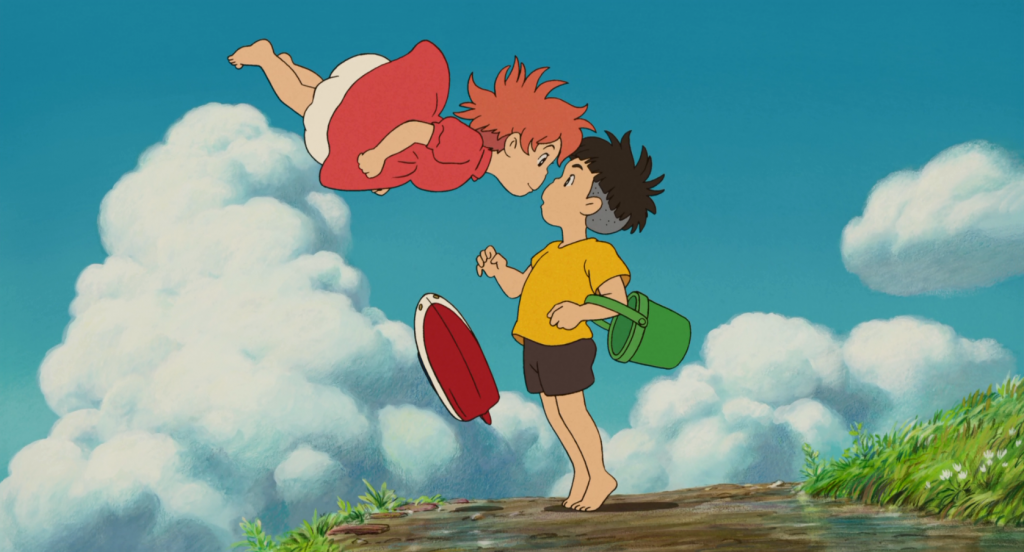