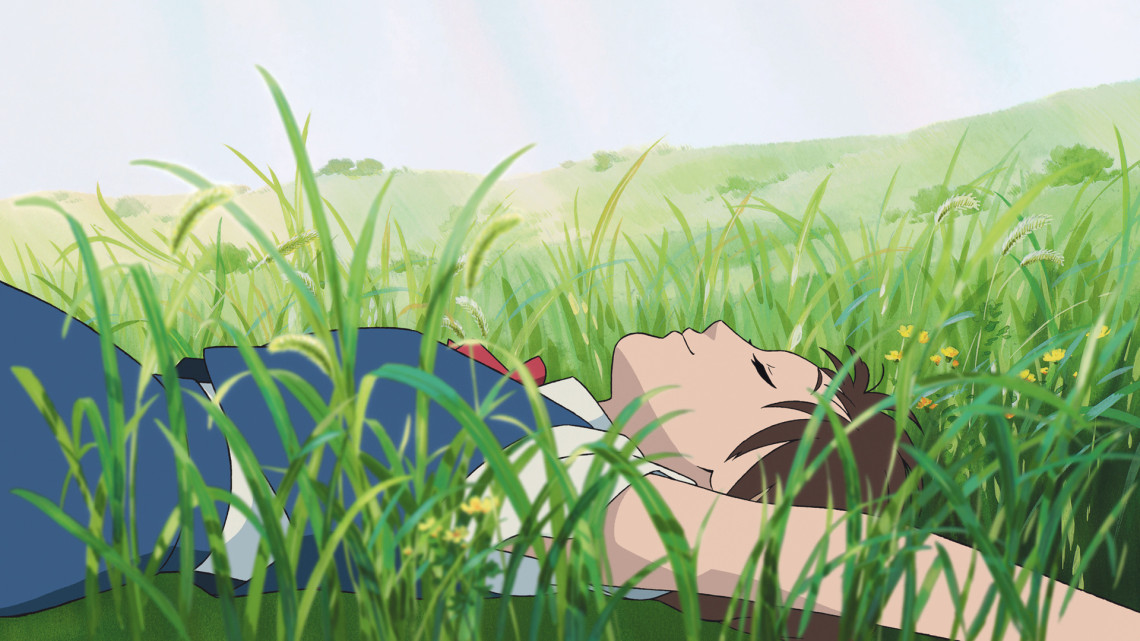 Hiroyuki Morita’s The Cat Returns is the second film from Studio Ghibli to not be directed by company co-founders Hayao Miyazaki and Isao Takahata. It is also, for my money, the weakest film to come out of Studio Ghibli that I’ve seen (though keep in mind that I haven’t seen the much-reviled Tales From Earthsea yet). That doesn’t make the film outright bad, mind you. It’s a breezy, quick, light-as-a-feather fantasy adventure that coasts along its brief 75 minute running time in as inoffensive a manner as possible.

But that’s really all there is to it. Sure, Ghibli has produced plenty of straightfoward adventure stories, from the perfect Castle in the Sky to the magical Spirited Away. But those films managed to contain within them a richer subtext than its conventional narrative structures would lead on. The Cat Returns, meanwhile, is all fluff, but it’s cute and enjoyable fluff at the very least.

And part of what makes The Cat Returns so, pardon the intentional pun, “fluffy”, is that it is the Studio’s first and perhaps only purely commercial endeavor. The film is a spin-off of sorts of the late Yoshifumi Kondô’s Whisper of the Heart, in which the characters of Muta and The Baron, who rose in popularity after the film’s release, are given their own self-contained story in an entirely different universe. The catch? Muta was just a fat cat that lead Whisper‘s main character Shizuku to an antique shop in the film’s opening and just wandered around for the rest of the story, while The Baron was just a miniature statue of an anthropomorphic cat who would only come to life during fantasy sequences imagined by Shizuku. In other words: ancillary characters that wouldn’t really carry their own movie…at least without a little shaking things up.

The circumstances of the production are bizarre, to say the least, but no more bizarre than other ways in which some of these films were produced. The Cat Returns was originally supposed to be a twenty minute short made for a Japanese theme park, with the Studio hiring the writer of the original Whisper of the Heart manga to write the manga version of their short for cross-promotion; recalling to mind how Japan Airlines commissioned Miyazaki to create a short film that ended up becoming Porco Rosso.

Then the theme park canceled the project, for unclear reasons. Now the short was gonna be forty-five minutes long and released as a standalone thing directed by animator Hiroyuki Morita. Morita, in preparation for the project, drew around 500 storyboards, and both Miyazaki and producer Toshio Suzuki were impressed enough to give the director free reign to direct a feature-length version of the story. 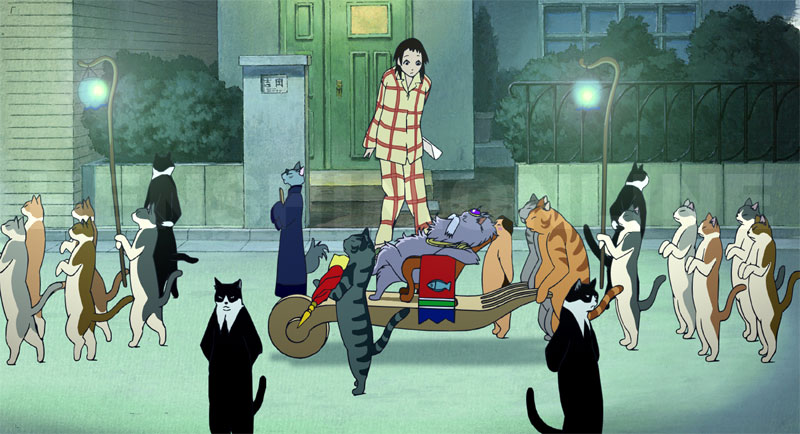 The result is The Cat Returns, which follows a new character named Haru, a clumsy teenage girl who’s always late for class and embarrassing herself around her high school crushes. She spends her days hanging out with friends and slacking off until one day, when she saves a mysterious black cat from being run over by a careless trucker. Haru think she’s done a good deed until, suddenly, the rescued cat stands on its hind legs and speaks, thanking her for saving his life. This gets the attention of the cat’s father, the Cat King, who becomes so intent on thanking Haru for saving his son that he does everything in his feline power to whisk her away to the Kingdom of Cats and have her marry his son.

Fearing the prospect of becoming a denizen of the Cat Kingdom, Haru gains the attention of the duo of Muta and The Baron from Whisper of the Heart. Except here, Muta is a talking cat, and the statue of The Baron can now come to life because “Sometimes, when people create something,” The Baron explains, “And they put their heart into it, their creation comes alive with its own soul.” Yeah, it’s not that good of an explanation, but considering this takes place in a world in which the Kingdom of Cats is a thing that exists, it fits with the film’s gonzo fantasy elements fine enough.

The second half revolves around Haru having to escape from the Cat Kingdom before its denizens make her their own, and if that sounds familiar to you, it should, because that’s ostensibly the plot of Miyazaki’s Spirited Away. Yes, it can be argued that the film is yet another homage to Alice in Wonderland‘s “naive girl trapped in a strange, strange world”, as Spirited Away also was, but it makes even more sense that the Studio would follow up their biggest success in the company’s lifetime by capitalizing on it yet again. Morita is very clearly homage-ing his own “sensei”‘s masterpiece, so much so that he recreates Spirited Away‘s famous “falling” scene in the end, to a lesser but still noticeable degree. 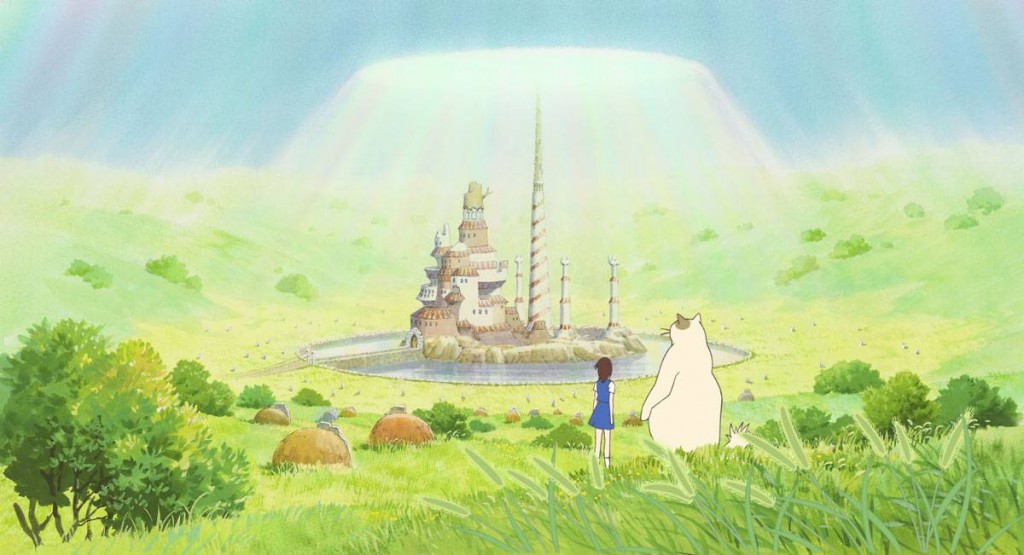 Outside of that, this might be a more “different” Ghibli film than even My Neighbors the Yamadas was. While the style of animation is somewhat similar, The Cat Returns has no thematic or tonal similarities to the Studio’s previous work, nor does it have their shared underlying melancholy. Instead, what we get is more of a sense of whimsy and broader humor (Haha, they gave her a fish. Get it? Because cats like fish!) than any of their other efforts, including an immediately noticeable lack of breathtakingly original visuals. When we finally make it to the Cat Kingdom, there’s not much imagery there that really stands out. We’re given a standard fantasy castle with a standard tall fantasy tower and a standard big fantasy maze, and that’s the extent of its fantastical elements.

The animation itself is still rather lovely, as all Ghibli films manage to accomplish, but the actual designs of the characters and environments leave a lot to be desired, though Morita still manages a few rather imaginative images, like a stairway made entirely out of a flock of crows and a horde of cats carrying Haru almost like a magic carpet. Otherwise, the imagery is fairly standard, and lacks the absurdity of something like Pom Poko or the wonder of Spirited Away.

At the very least, all the characters are fun and likable. Part of what impressed Miyazaki and Suzuki in Morita’s storyboards was the characterization of protagonist Haru, who they liked because she had “a believable feel to her”. Haru manages to be very relatable, because unlike Ghibli’s more graceful female protagonists, Haru is actually an affable klutz that gives her an everyday, neighborly feel. Muta and The Baron are fun additions, as they act almost like a buddy-cop/Odd Couple duo, with The Baron’s professionalism and suave demeanor clashing with Muta’s bombastic, easy-to-outrage personality. Meanwhile, its cast of supporting characters, human and cat alike, are colorful and have a surplus of personality that most other films of its ilk usually lack.

But as enjoyable as the film is, it’s light to a fault, as there are hardly any big stakes when the villains are shown in the most incompetent image imaginable, and the various obstacles our heroes face end up solving themselves most of the time (a moment when the trio is cornered on a narrow stairway, for example, literally resolves all by itself when the stairway crumbles for no reason and sends the enemies plummeting to their demise). It’s also a significantly emptier film than any of the Studio’s previous works, thematically and morally–bringing me to appreciate the inspired lunacy and environmentalist  nuance of another Ghibli movie I wasn’t as keen on as others, Pom Poko. It’s as straightforward a film as you can possibly get, but it’s so short at 75 minutes and of such small consequence that it doesn’t feel like a waste of potential until it’s finally over.

There’s really not much else to be said of The Cat Returns. It is what it is: a moderately enjoyable minor effort from the Studio that performed moderately at the box office and received a moderate response by critics and audiences. At the very least, the film has a really fun English dub starring Anne Hathaway, Cary Elwes, Elliott Gould, Judy Greer, Kristen Bell, and Andy Richter, along with a deliciously cast Tim Curry as the Cat King.

Next time on the Retrospective, we return to Miyazaki for his most critically divisive work: the stunning (and messy) Howl’s Moving Castle. 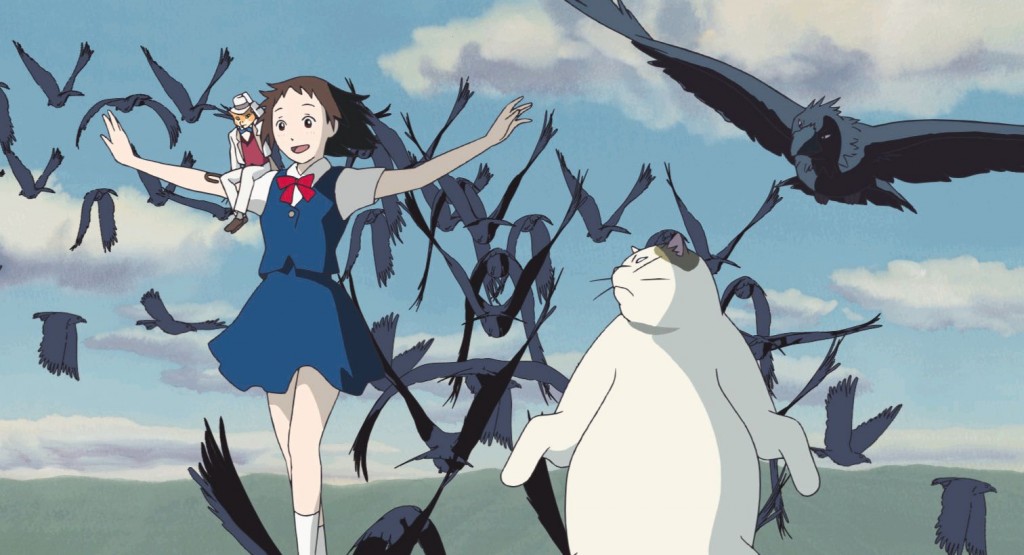