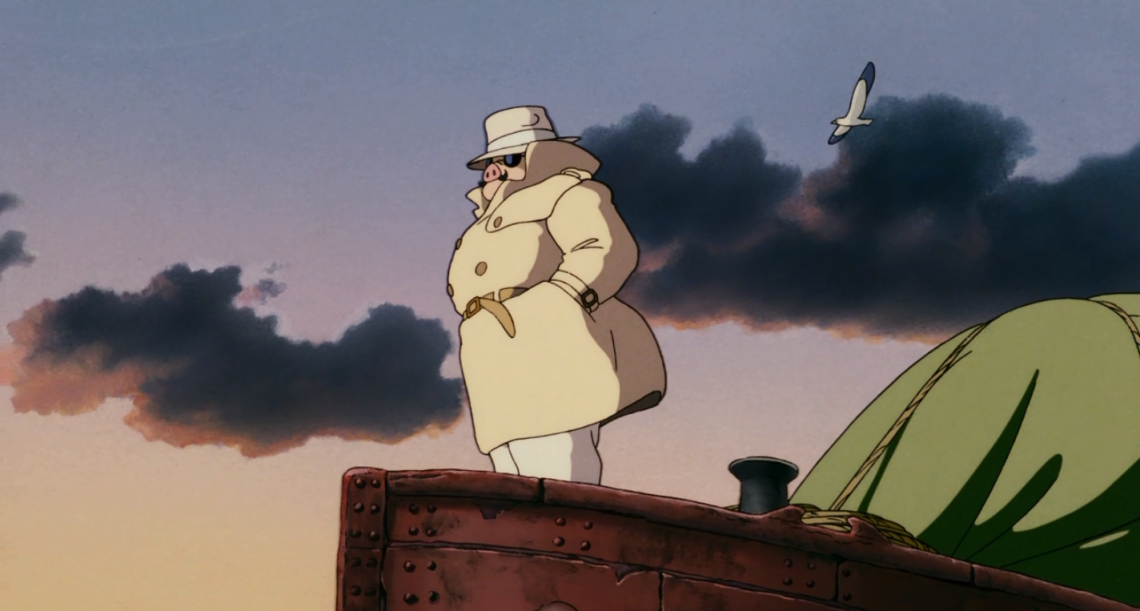 There’s a scene in Porco Rosso where our porcine hero, a sky bounty hunter during the time between the two World Wars, is looking to rebuild his plane with a new engine. The mechanic shows him their latest model, which is adorned with the name “GHIBLI” in big, capital, non-Japanese letters. “This should give me some extra kick,” the pilot says. Considering Miyazaki’s love for aviation and aerospace engineering, it’s fitting that he would imagine the name of his animation studio as a powerful engine with that extra kick, powering a work of art like Porco’s plane.

All of Miyazaki’s films have had streaks of whimsy and delight to offset some of their underlying melancholy, but his 1992 feature, Porco Rosso, is the first film of his since his debut, The Castle of Cagliostro, to be a flat-out comedy. More than that, really, it features perhaps the most bizarre premise of his films: An Italian ex-WWI fighter pilot works as a bounty hunter in the Adriatic Sea who fights off baddies with his ace flying skills…also, he was transformed into an anthropomorphic pig.

I mentioned in my Castle in the Sky piece that a common theme in Miyazaki’s work was the balance between two wildly different genres and visual elements forced to share the screen, and Porco Rosso is the most extreme case of this. It’s barely ever explained how or why it was that our hero was afflicted with this curse, and all the supporting characters have just kind of accepted it as his “thing”. If anything, one could argue that the film could’ve done without this absurdist interjection and not suffer any significant loss in quality. But when you think about what Miyazaki is trying to do with this small yet significant addition of whimsy, you realize there’s a bit more to it than just its ridiculousness. 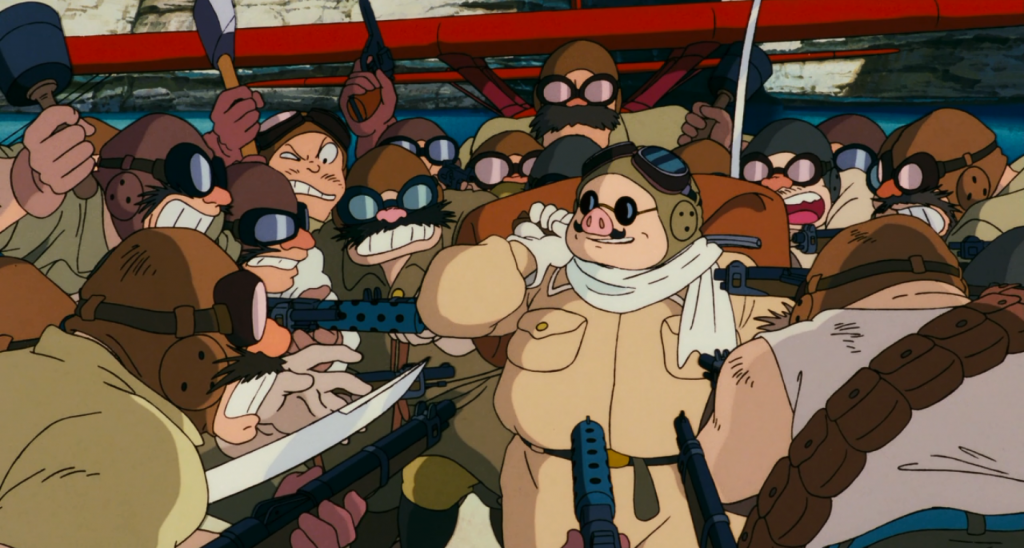 Porco Rosso was originally produced to be a short film made in conjunction with Japan Airlines as an “in-flight movie”. Originally set in Croatia and based on a manga that Miyazaki himself had written and drawn, the project changed significantly after the production was altered by the breakout of the Yugoslavian Wars in the early 90s. After that, Miyazaki said he wanted to go for a “darker tone” (strange considering the film’s overall comedic and light-hearted energy) and the film featured plenty of the undertones (or perhaps just overtones) of the period it is set in, complete with the sexism of the age and the the looming spread of fascism in Europe.

There’s not much of a plot in Porco Rosso, which is simply a character study of the pig-headed Porco (originally named Marco, only to change his name to Porco Rosso after his transformation, which is Italian for “Crimson Pig”) as he goes through his days as a bounty hunter. We never really learn why or how he was cursed with his transformation, but we understand why it somehow fits his personality. Porco considers himself as an outcast from the rest of the world, often spouting lines like “I’m a pig. Laws don’t apply to me.” when hunted by the Fascist Secret Police, and so on. All he seems to care about is to “Fly for myself,” as he puts it, and in a way, he certainly got what he wished for. He no longer has to associate himself with fascists, pirates, soldiers, and now, the human race itself. He is, for better and worse, his own person…or pig. 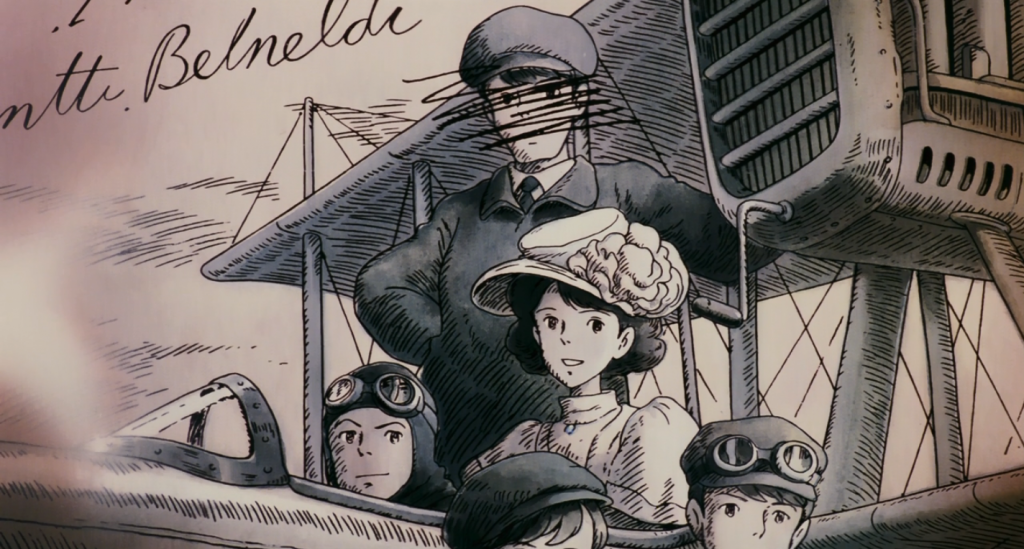 In a sense, Porco Rosso is very much a precursor to Miyazaki’s final film, The Wind Rises, in terms of its depiction of aviation being a symbol of freedom for its characters. The key difference, of course, is that while The Wind Rises showcased the harsh realities of the plane industry during wartime, Porco Rosso is pure romanticization. Flight ends up “freeing” the characters from the constraints of fascism, gender stereotypes, social norms, etc. The planes that allow for that freedom are lovingly detailed and animated, making ballet dances out of dogfights and languishing on the clouds serving as their backdrop. The line that most emphasizes Miyazaki’s love for these old planes in the film is when the pirates are ready to crush Porco’s plane and Fio, Porco’s temporary sidekick for the remainder of the film, stops them by screaming, “Smash it?! You’d destroy a work of art?!”

That same character, a young, aspiring engineer, makes a speech later in the film about how she’d heard stories from her grandfather about how seaplane pilots were the most honorable fighters in the world. “Every time they fly,” she announces to a band of dishonorable pirates, “The ocean and the sky purify their hearts. So they’re braver than any pilot in the sky. And mightier than any sailor in the sea!” Not only are the planes romanticized, but so are the people who fly them, giving Porco and his transformation a mythic, fable-like kind of stature.

In a way, Fio is the most important character in the film because she embodies that kind of freedom that all pilots, including Porco, strive towards, and she does this through her nonchalant defiance of typical gender norms. I briefly mentioned Miyazaki’s penchant for feminism in his films when discussing Kiki’s Delivery Service, but Porco Rosso might be the most emblematic film of that side of the animator. You have Porco, who is a pig both literally and figuratively (it sure isn’t subtle, but definitely clever) and part of his arc is in appreciating the women around him, like Fio and his possible love-interest Gina, who don’t think of him as the outcast he sees himself as. 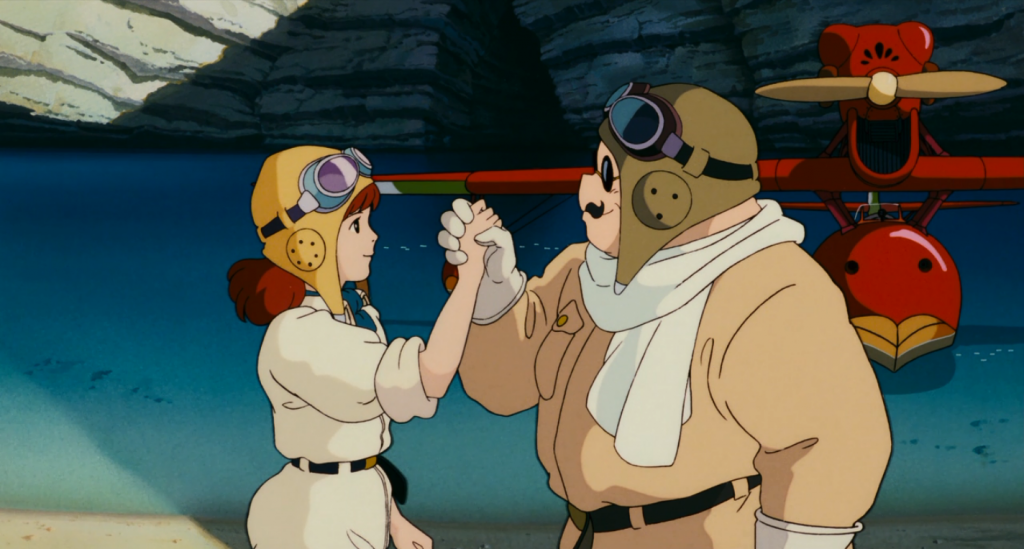 In fact, there’s a scene later on where a bet is made between Porco and a rival pilot, and Fio willingly subjects herself to becoming a prize in the bet just to save Porco from having to be hunted down later. Although she is purposefully lowering herself and her status as a woman, it only manages to showcase how much more honorable and resolved she is than the male pirates surrounding her. The women of the film aren’t depicted as having to defy norms or expectations, even though that is what they inadvertently do. They are all simply just as hard-working and strong as the men, and it’s the world around these women that is shown as flawed, broken, and ignorant.

That world is not just rampant in sexism, but also at the threat of another war, which, in many ways, echoes what was happening in Yugoslavia that brought Miyazaki’s project into a different direction. War isn’t a major concern in the film, but it’s a presence that is felt, not only as a future threat that we as the audience know is awaiting our heroes, but as a past mistake that is influencing much of Porco’s character. This is most evident during a beautiful flashback–the only dramatic scene in the film–to the time he fought Austro-Hungarian planes in WWI, when he was still a human named Marco. Barely escaping the hellish dogfight, Marco finds himself either hallucinating or perhaps being transported to some kind of heaven for fighter pilots. His plane floats above the clouds, which turn into a milky white sea right below a cloudless sky. The only thing in that blue space is an otherworldly strip of planes, almost like a meteor belt. Suddenly, all the planes that had fallen in that battle, some of them friends, others Marco had killed, floating up and joining that strip in the sky, with Marco being left behind. 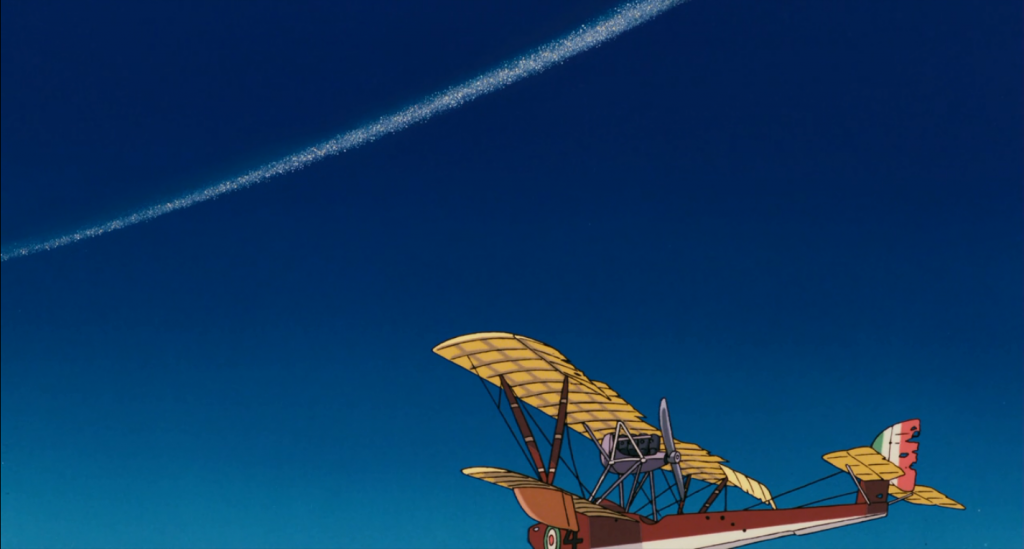 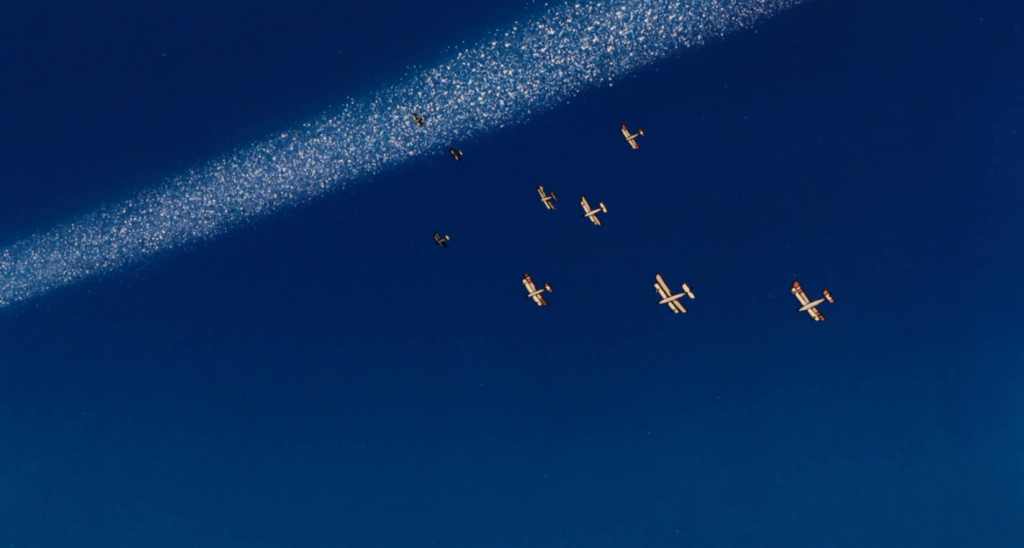 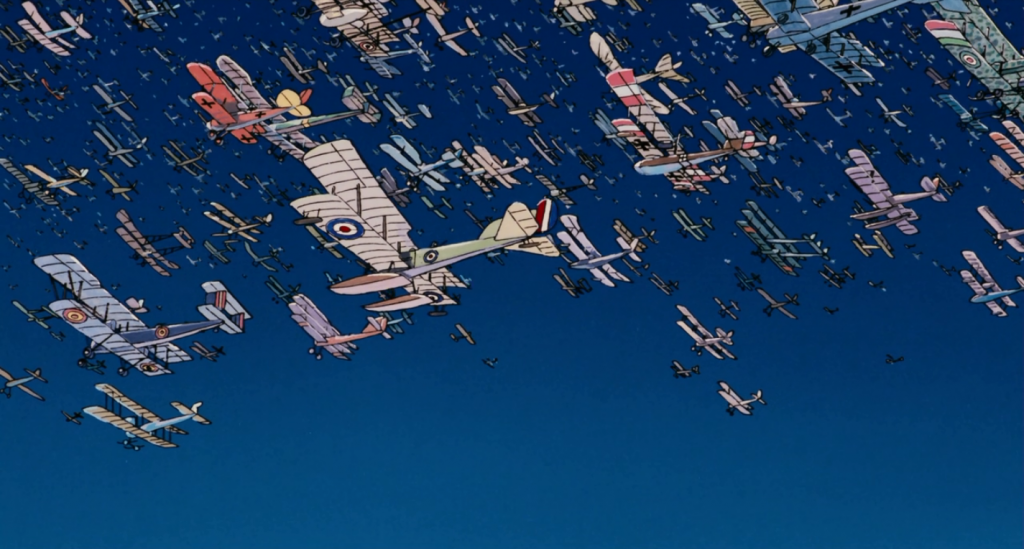 Without so much as an explicit or didactic statement, Miyazaki manages to subtly convey an anti-war sentiment in his film and a part of Porco’s character. Perhaps it is because he knows he was fighting on the wrong side that he deems himself unworthy of remaining human. Maybe his near-death experience was an Act of God, as was his transformation. We’ll never know for sure since the film thankfully never spells anything out, though I find myself linking the film more and more to The Wind Rises now that I’ve seen both. Porco Rosso feels almost like a thematic extension of The Wind Rises‘s sense of guilt, for how these beautiful machines of freedom are bastardized into war machines. Porco wasn’t just removed of his humanity after fighting in the war, but he was left to take the form of an animal, acting solely on its primal urges, as war often does. And even when Porco is past that point in his life, that pig-headedness of his remains with him, taking more than just a reinvention of himself to be human again.

Granted, he doesn’t really mind his physical state either, nor does he really care for it. As long as he can fly his plane without the fascists on his back like he was forced to during the Great War, he’ll be content, for the sky gives him freedom. It won’t be long until another World War hits and Jiro Horikoshi steps into the limelight. But at least Porco has been freed of the war, and can now roam the skies for as long as he likes. 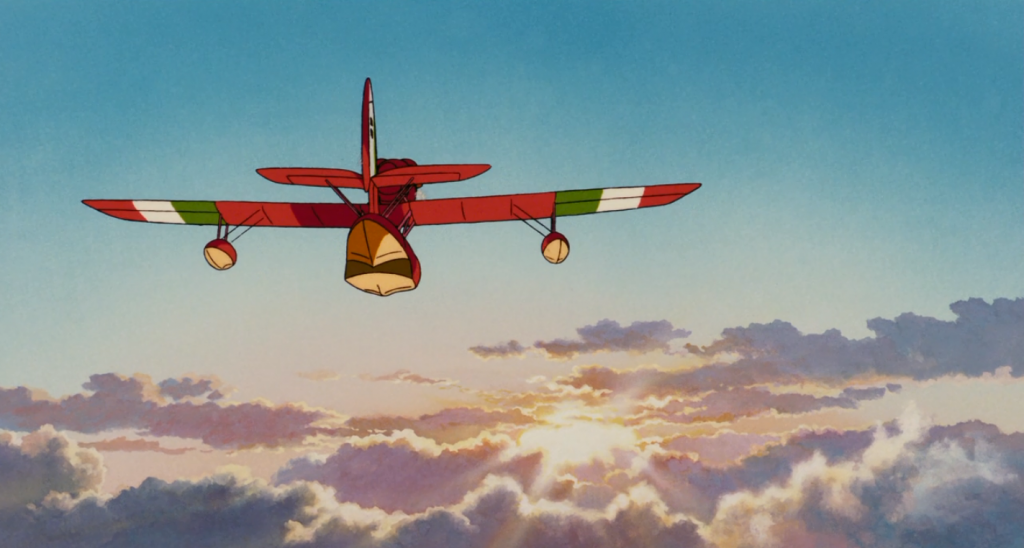 Of course, it can’t be ignored that the film is also just really damn funny and delightful throughout, even with these very serious themes bubbling underneath the surface. The humor lands wonderfully, whether it be through slapstick or clever dialogue. It’s also one of the few times I’d recommend seeing the English dub instead of the Japanese one, just to hear Michael Keaton’s impeccably deadpan delivery as Porco. Granted, that didn’t stop the Japanese version from being the highest-grossing film in that national box office of 1992, making Porco Rosso the third time in a row that Studio Ghibli topped the domestic charts. With all of these big hits behind him, Miyazaki went on a longer-than-usual gap for his next film, which would be his most ambitious and epic work so far.

But during that wait, Isao Takahata returns to forgo his usual penchant for realism by diving into Miyzakian whimsy. Next time on the Retrospective, we talk environmentalism, tanooki, and, believe it or not, testicles in Takahata’s Pom Poko. 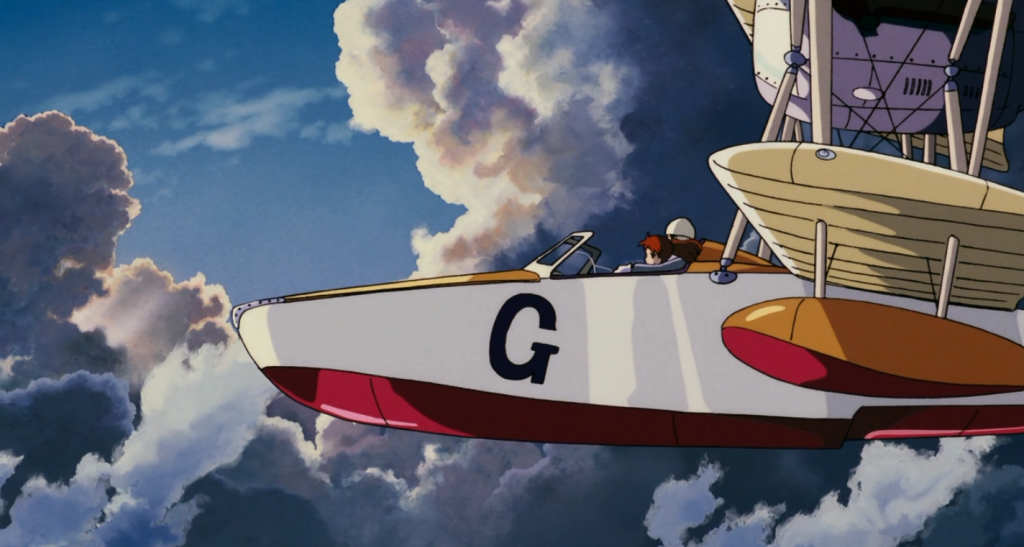 One thought on “The Studio Ghibli Retrospective: ‘Porco Rosso’”