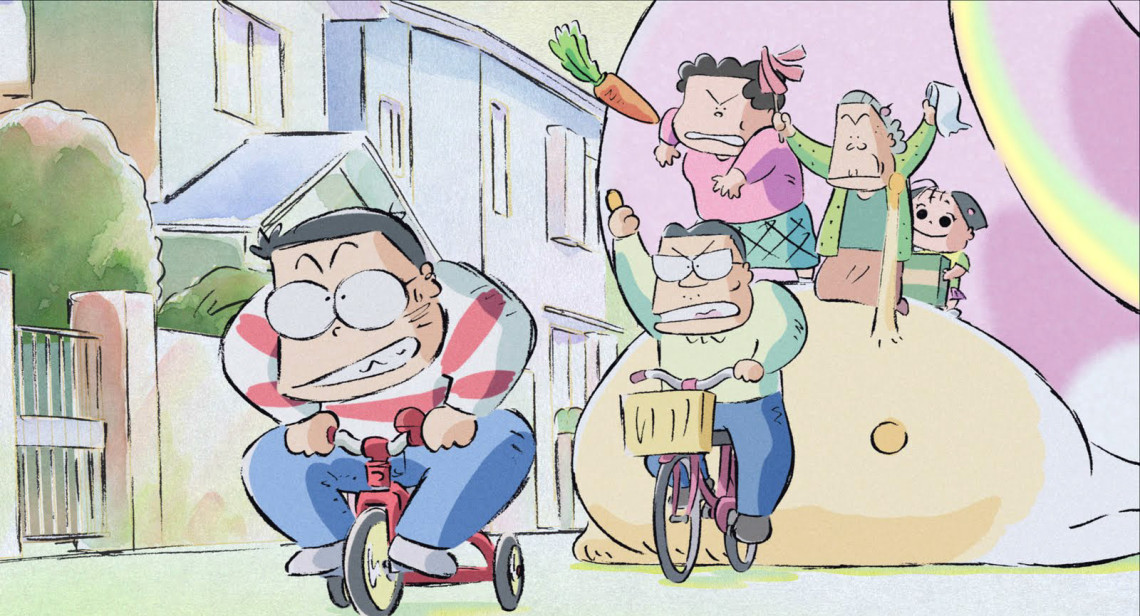 The Studio Ghibli Retrospective: ‘My Neighbors the Yamadas’

A haiku, as most readers hopefully know, is a Japanese poem meant to lyrically juxtapose two images or ideas with just a few lines and/or syllables. In the Japanese language, there are more limitations, such as the number of syllables in each line, and whether or not it can be recited in one breath. In English, that’s…rather hard to apply, so we just keep it to the original definition and don’t really go beyond that often.

I mention this only because it’s imperative to understand what Isao Takahata’s film My Neighbors the Yamadas, which is structured like a collection of these haikus, is going for, as it is so very different not only from the rest of Ghibli’s filmography, but also from most kinds of traditional narrative structure. Takahata has always been the more experimental of the Ghibli directors, and this is the most experimental film out of all of his works at the Studio. 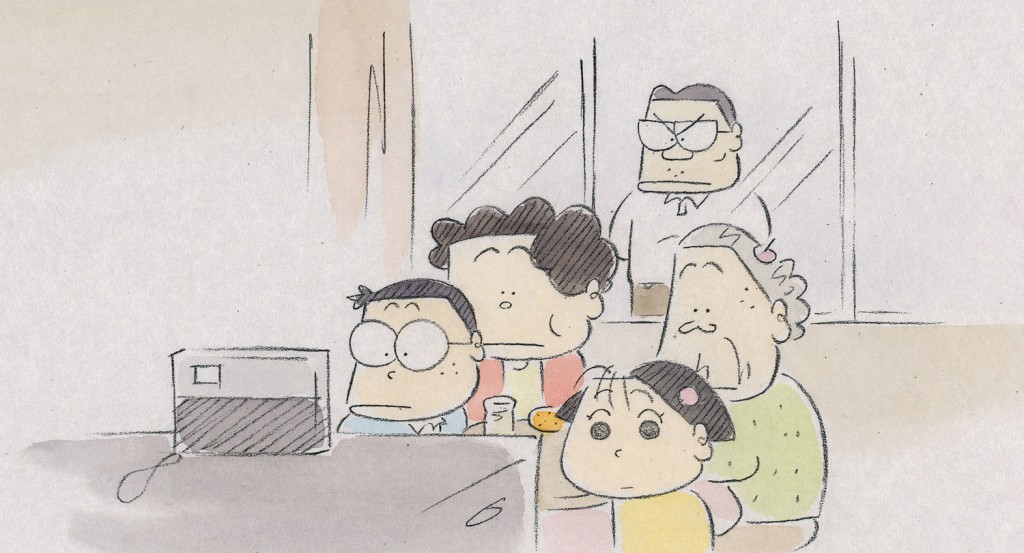 My Neighbors the Yamadas can be best described as just a series of “scenes from a family”, to borrow from Bergman. This family, the titular Yamadas, consist of the mother and father–Matsuko and Takashi Yamada–, their son Noboru Yamada, daughter Nonoko Yamada, and their grandmother Shige Yamada. The film focuses on their daily lives through a series of vignettes, ranging from a single minute long to up to ten minutes in length, hence the haiku comparison.

It’s a film of formless structure, as we waft around from scene to scene with little connectivity between the two, which contradictedly ends up giving us a more fully realized portrait than a traditional structure would have. Free from the constraints of narrative and story, Yamadas is able to move straight to the essence of this family, just as a haiku is able to describe the essence of an image or concept.

The only thing that connects certain scenes is something like a shared theme. For example, the title card “Male Bonding” prepares us for a series of vignettes that are focused primarily on the father-son pair Takashi and Noboru. Other themes include “Paternal Supremacy Restored”, focusing on Takashi’s attempts to assert himself as the man of the house, “Art is Brief, Life is Long”, which centers on grandma Shige’s confrontations with her own mortality, while “Breakfast of Champions” focuses on how each of the family members handle breakfast. 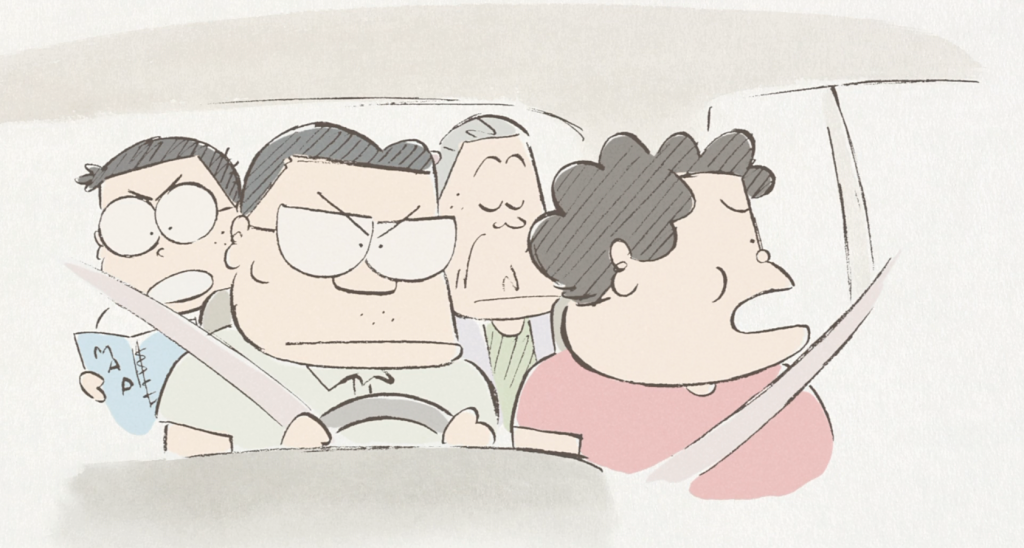 What really sets My Neighbors the Yamadas apart from most animated films, however, is its style, which is completely distinct from any other Japanese animated film. Whereas most animes tend more towards heightened realism, Takahata sets out to recreate the feel of simple watercolors. It’s easy to look at screenshots of the film and think of it as “crudely drawn”, but that doesn’t make the film any less beautiful than other Studio Ghibli works. When you see the film in motion, you begin to understand the level of sophistication in this style, which–like a haiku–distills images to their essence while remaining beautifully and lovingly animated.

But it’s not just the aesthetic that’s changed. Takahata also set out to change Studio Ghibli’s method of production as well, as My Neighbors the Yamadas is the first film in the Studio’s history to be animated entirely through a digital process. Whereas previous films like Pom Poko and Princess Mononoke contained supplemental animation from computers, every single frame of Yamadas was painted and animated entirely in a software program, setting a new and efficient standard for the Studio, while also proving that switching to digital can still help maintain their established hand-drawn feel.

Like the film’s structure, the aesthetic also frees Takahata from the constraints of traditional animation, allowing him to fill in as much of the background as he wants, as well as outright change styles on the fly. Takahata briefly experimented with combining different aesthetics with Only Yesterday, in which present day sequences were more realistically detailed and vibrantly colored while flashbacks to the main character’s childhood were more stylized and featured more washed out colors. Takahata does a similar thing with My Neighbors the Yamadas, albeit briefly, during only one of the longer vignettes. 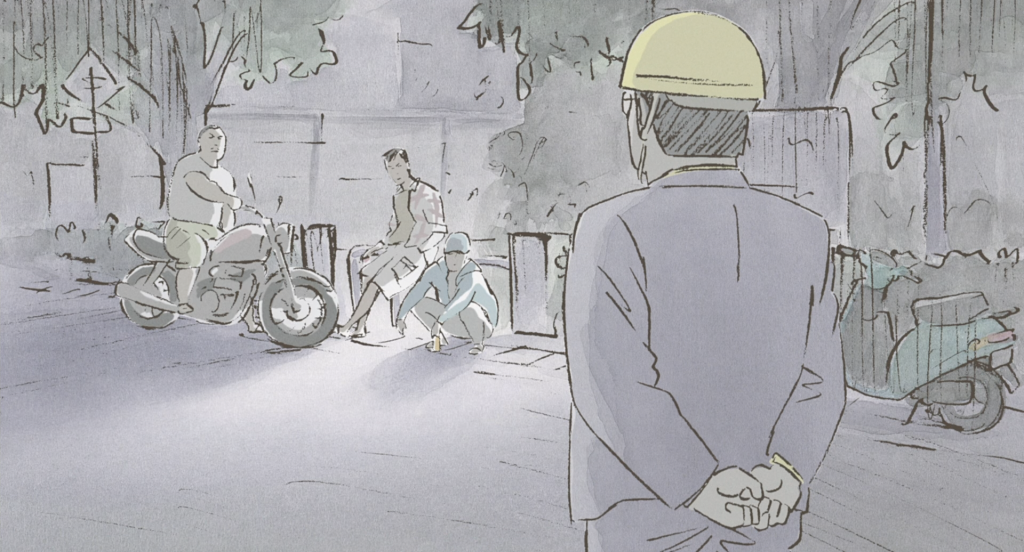 A motorcycle gang is causing a ruckus in the neighborhood outside while everyone’s trying to sleep. Each scene taking place outside of the Yamada household is drawn with a more realistic level of detail than any other scene in the film, with fully drawn environments, and less caricature-like proportions for the character designs. When the father steps outside to confront the gang, he himself changes appearance as he is given more realistic proportions. It’s the only instance of any real danger or conflict in the film, thus the only moment Takahata steps off from his cheery aesthetic.

In my Grave of the Fireflies piece, I mentioned how Takahata used the animated medium to take that film’s adult story and show it through the perspective of childhood innocence. This film carries that philosophy to a new extreme. The only character who isn’t given the same amount of focus is the five year old daughter, Nonoko, who introduces the audience to the family through narration. It is implied through this that we’re seeing these events through her perspective, as we peer into these very real traditional family concerns and problems through a viewpoint of moral discovery.

Each situation manages to feel so remarkably well observed while maintaining a level of absurdity. It’s easy to look at the Yamadas and be reminded of a family that you may know, whether it be your own or someone else’s. At the same time, however, there’s just enough exaggeration to bring the Yamadas to some kind of strange universality: just recognizable enough to relate with, but silly enough to laugh at. 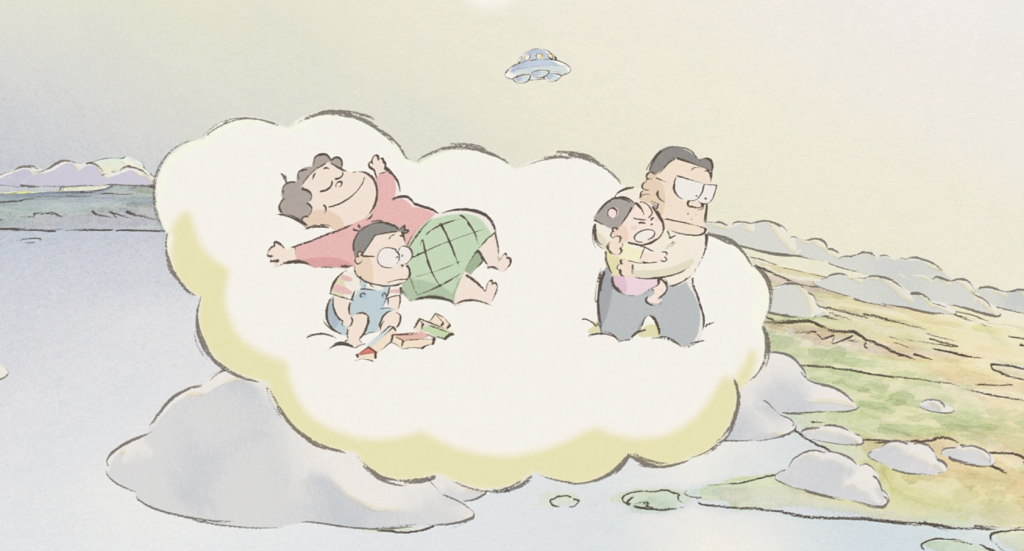 Take, for instance, a funny scene in which the grandma has two baseballs saved up, both of which fell into the yard from different groups of kids. One group asks the grandma for their baseball, and she shows them both: they can either take an old, beat up baseball, or a shiny, brand-spanking-new one. The boys take the worn out one, and the grandma, so impressed by their honesty, decides to reward the two by giving them both balls. She feels good about having just rewarded the boys’ honesty…until the real owner of the new baseball shows up, and she’s forced to forgo that honesty.

That sketch best emphasizes how Takahata’s laughs become gut punches. The film is hysterical, easily one of the funniest animated films I’ve ever seen, each joke landing with relentless consistency, pinpoint precision, and poetic poignancy. But soon, Takahata makes us eat those laughs. As funny as the film is, it still retains a Ghibli staple: an undercurrent of deep melancholy.

It’s a deceptively slight film, imbuing into its simplistic animation style and sly humor an astounding level of philosophy–again, like a haiku. Each vignette manages to pack in its own tiny epiphanies about living with others, and they each add up to create a cumulative effect of real growth, similar to how we grow in reality. It’s silly watching Takashi attempt to make a family photo in the snow while the rest of his family chooses to remain inside watching TV, until it becomes tragic when we see him standing in the snow all by himself. On the off set, it’s depressing to watch Takashi sitting alone on a swing set imagining his own superhero theme song, until it becomes funny when we see that it’s a playful reference to Akira Kurosawa’s Ikiru. 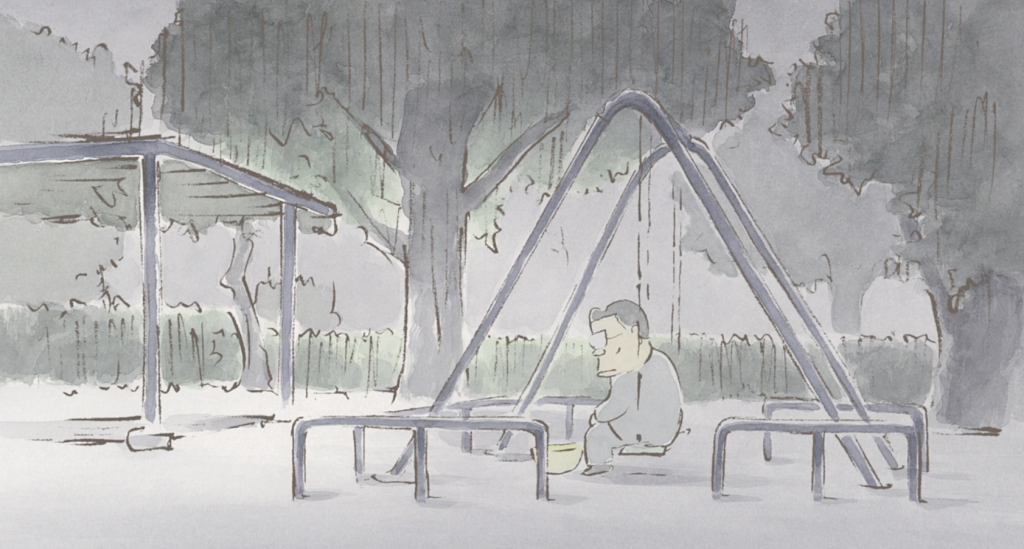 One of the pearls of wisdom we get early on in the film, taken from Takashi and Matsuko’s wedding ceremony speech, is that the most destructive thing to a family are not the low points, but instead the doldrums. No matter how bad things get, it’s still a chance to develop as a family and move forward. It’s in the periods of mundanity and uneventful idyll that families break apart, each member floating off to their own solipsistic world.

Thus lies both the tragedy and beauty of the Yamada family and all traditional middle-class families, whether they be Japanese or American: they live and shall continue to live in an eternal doldrum, so content in their mediocrity that there’s a chance they may never fully evolve… but they wouldn’t want it any other way. So content are their lives that they can make their own highs and lows, turn small moments of laughter into the greatest joy, and confide in each other in a low as small as not having an umbrella during a rainy day.

Takahata has been calmly exploring and celebrating mundane Japanese life with his films, from the survival of the two kids of Grave of the Fireflies, to the coming-of-age of the nature-loving protagonist of Only Yesterday, and even in his fantasy film Pom Poko, which is about talking raccoons, but even they succumb to middle-class Japanese culture by the film’s end. My Neighbors the Yamadas may not be his best film (impossible with the masterpiece Grave of the Fireflies under his belt), but it is his funniest one, and more importantly, his most ultimate distillation and celebration of that mundane Japanese lifestyle. 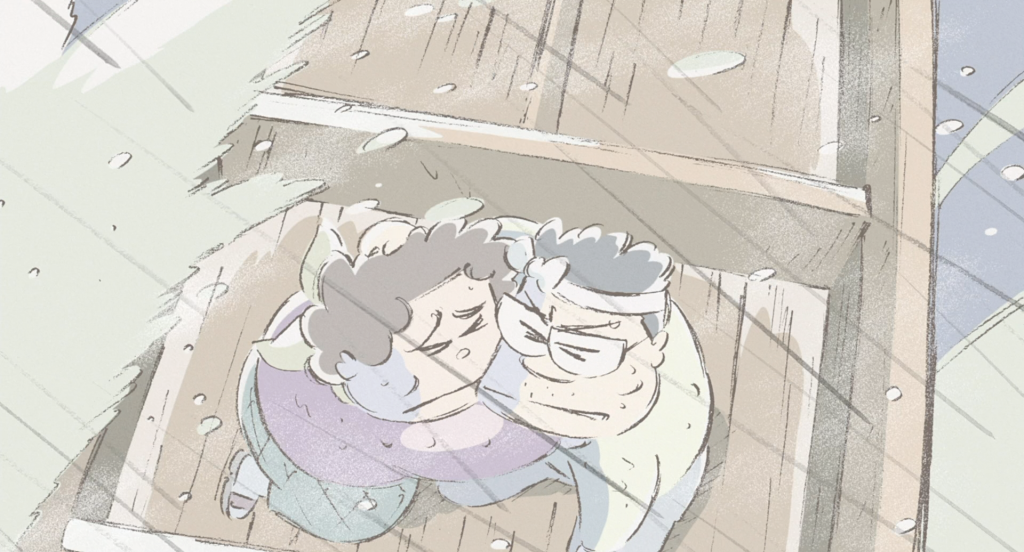 A spring shower
Dressed for rain
Talking as they go
~Narrator

While the film received generally positive reviews, it wasn’t as big a success as Studio Ghibli’s other efforts, breaking their recent streak of box-office dominating hits in Japan. Another one of the Studio’s more underappreciate efforts, it deserves to be seen by more, especially considering Takahata didn’t release a single new film for fourteen years until the release of his 2013 film The Tale of Princess Kaguya (which will be distributed to North America this year).

With Takahata taking a break from the Retrospective, our focus shifts to some brand new animators and, of course, Miyazaki, who follows up his groundbreaking Princess Mononoke with what may be his masterpiece. Next time on the Studio Ghibli Retrospective: Spirited Away. 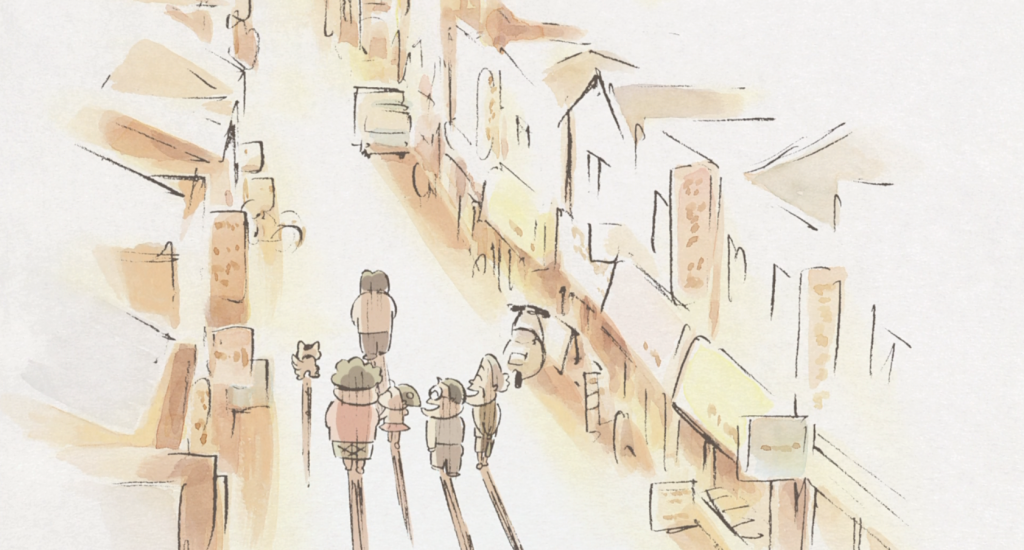