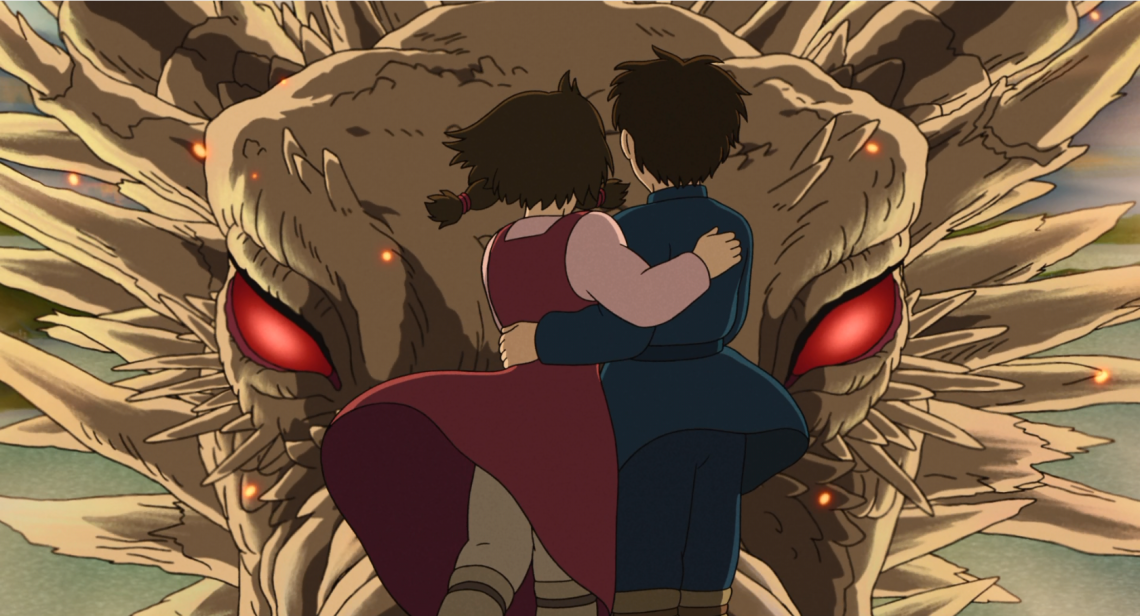 As has already been documented on the Retrospective, I wasn’t as big a fan of Isao Takahata’s Pom Poko or Hiroyuki Morita’s The Cat Returns as many others were; but neither of them were explicitly “bad” movies. While I wasn’t particularly amused by Pom Poko‘s surrealist brand of cultural humor, I appreciated how it managed to bring surprising depth and nuance to its eco-message, which could’ve been preachy and was instead handled maturely. The Cat Returns, on the other hand, was the studio’s most empty and light film at the time, but it at least had charm and likability to compensate.

I mention this because this week, we’ll be dealing with the first and so far only (in my opinion) “bad” movie to come out of Studio Ghibli. And Tales of Earthsea isn’t just bad. It’s actually pretty awful. An overly stoic, pretentious, boring, unimaginative trainwreck that just happens to have been made by some of the greatest animators in the history of Japanese anime. It brought to mind when I had to detail the monstrosity that was David Lynch’s Dune for his retrospective series, except whereas Dune was awful in very interesting, bizarre, hard-to-believe ways, Tales From Earthsea is just a cliched chore to sit through.

And like most ambitious yet misguidedly bad productions, the most interesting aspect of Tales From Earthsea‘s folly is, unfortunately, what happened behind the scenes. A fair amount of the studio’s feature films have been directed by other animators besides Hayao Miyazaki and Isao Takahata at this point. But Earthsea bears the distinction of being directed by Hayao Miyazaki’s son, Goro Miyazaki, who was not an established film director — let alone a director of animation –, thus turning this into a project fueled by legacy. 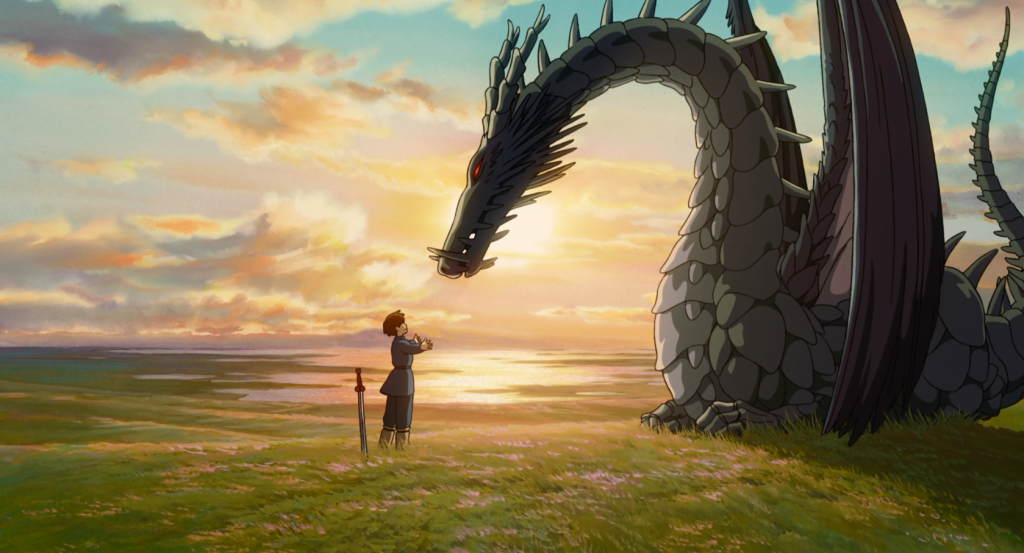 Let’s back up. For quite a long while — it’s not clearly documented when this began — Miyazaki and the rest of Studio Ghibli had attempted to adapt any one of Ursula K. Le Guin’s books from her popular, critically acclaimed Earthsea series. The books detail various stories that take place in the fictional fantasy archipelago of the namesake, not just offering subversive takes on the traditional “hero’s journey”, but also detailing nuanced depictions of cultural and racial interactions, political strife, magic, and a distinctly feminist worldview (the first three books infamously set up a system of government ruled by an ironclad heirarchy of men, only to subvert them by revealing these rules to be the result of a ruinously patriarchal society). These are all themes that have been incorporated throughout the Studio’s canon, and with a rich fantasy world to draw from, it makes sense that they would want to dip their toes in this distinctly western fiction.

Le Guin continuously rejected their offers to adapt her work, as she likened the animators to more juvenile animation like Disney (which is off-base on both parties, but you get the idea). Upon finally seeing Miyazaki’s Spirited Away after it won the Academy Award, she finally approved of their proposal. The problem, however, was the usual difficulty of adapting such sprawling works of fiction into a single animated film. It’s even been rumored that Hayao Miyazaki felt himself not good enough to make it properly. That combined with the fact that he was busy making Howl’s Moving Castle at the time made production on the project less and less likely.

That is until studio head Toshio Suzuki asked Miyazaki’s son, Goro, to make it as his directorial debut. Some backstory: Goro Miyazaki had barely any experience with animation. That isn’t to say that he was untalented as an artist. He pursued a career in landscaping and construction, even helping with the design of the Ghibli Museum in Mitaka. Goro was simply acting as an advisor on the Earthsea project, but agreed to Suzuki’s suggestion. However, he did so without his father’s blessing. Hayao, dissatisfied with the news due to Goro’s lack of experience, refused to speak to or involve himself in any way with Goro and his new job as a high-profile director in the Studio. 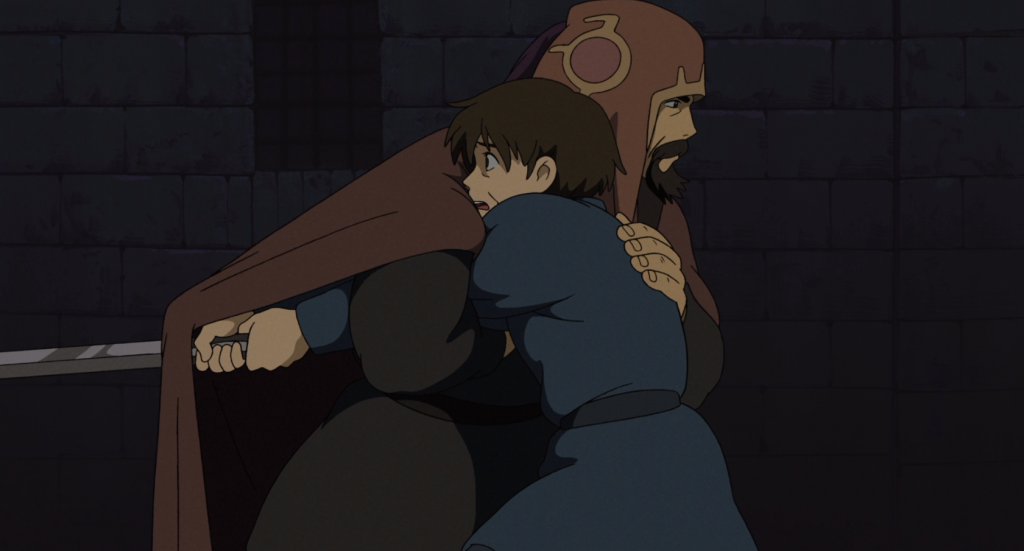 While I hate to go for the low blow, that lack of experience Hayao was so concerned with definitely showed with Goro’s Tales From Earthsea. The film opens promisingly enough, with the usually gorgeous animation bringing Le Guin’s world to rapturous life. The designs of the ruins strewn across the land have the feel of a Team Ico game, suggesting a history that compels us to pay more attention to every aspect of every frame. All of that good will that the opening thirty minutes establishes is wasted, however, by Tales From Earthsea‘s embarrassingly traditional plot and a cast of characters that range from boring to downright hateable.

On the hateable spectrum is, unfortunately, our main character Arren. The film opens with him killing his own father, the ruler of an Earthsea kingdom, presumably in cold blood. I stretch the word “presumably” because we’re never given a clear answer as to why this act occurs until a little over halfway through, and even then it’s frustratingly vague.

But never mind that. Arren wanders Earthsea as an outcast until he’s saved by an old wizard named Ged, or “Sparrowhawk” if you’re so inclined. We learn from him that something is “off balance” in Earthsea, and he must find out how to rectify it before darkness consumes the land. Sound familiar? It should, if you’ve watched any fantasy or even sci-fi film from the last four decades. 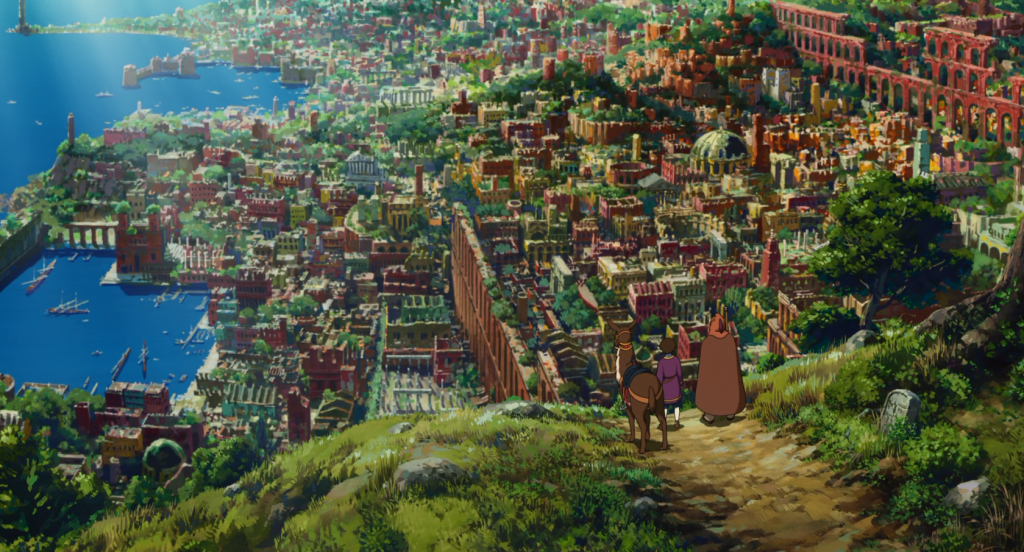 Unlike most traditional fantasy stories, however, Tales From Earthsea‘s scope is astoundingly small. Despite the huge stakes and vast, imaginative vistas we’re promised in the opening scene, the rest of the action is confined to two locations: a small farm in the middle of nowhere, and a mostly abandoned castle in the middle of nowhere. The result is stiflingly low-key. There’s an interesting world here, not only established by the incredible visuals, but also the small increments of Le Guin’s mythology and writing that we do manage to get; and the audience has only these things to cling onto, like rats scurrying a sewer for a few measly crumbs. Instead, what we get is so small scale, it’s downright suffocating.

This problem could have been circumvented by the inclusion of likable characters and an original plot, but that’s already out the window. Plenty of the Studio’s films have had cliched, traditional stories before, but they were all injected with something more. Take Hayao Miyazaki’s Castle in the Sky. An ode to swashbuckling adventure serials, the fim works with its tropes thanks to not just resonant themes and fun characters, but also with just a simple sense of whimsy and light-hearted joy. And for the purposes of not comparing and contrasting son to father, which is expected and inevitable, also take into account how all those Marvel films are able to get around their (numerous, numerous) flaws thanks to characters that audiences enjoy following around from film to film, and a light-hearted nature that doesn’t smother the viewer.

On the other hand, Tales From Earthsea takes itself so deathly serious that you’re never able to have any fun with the material. It’s clear that Goro and his animators are trying for a sense of majesty and grandeur, but with, again, such a poor sense of scope, it never comes across save for its introductory scenes. Goro’s handling of the material is simply joyless; so caught up in its overbearing stoicism that it forgets to imbue its story with a heart of any sort. 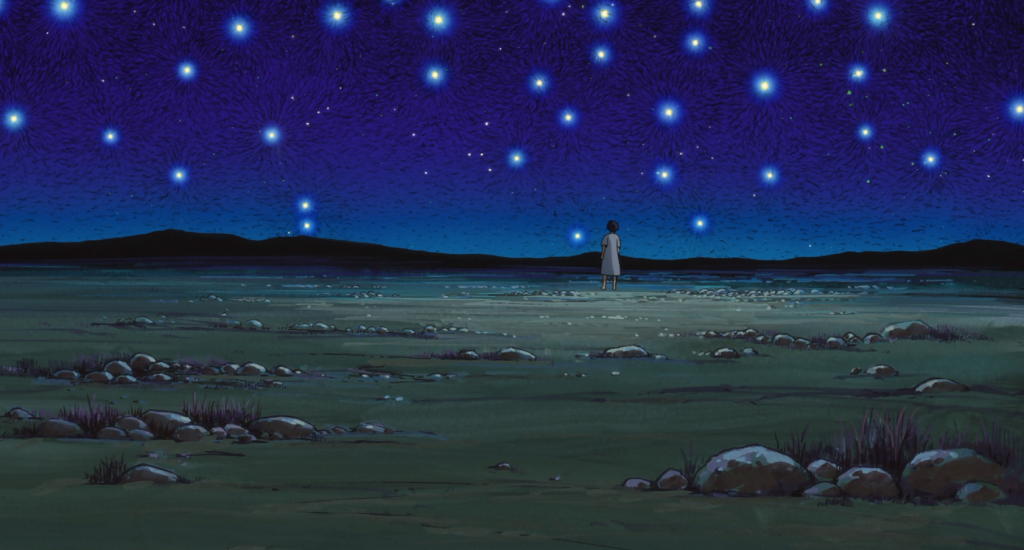 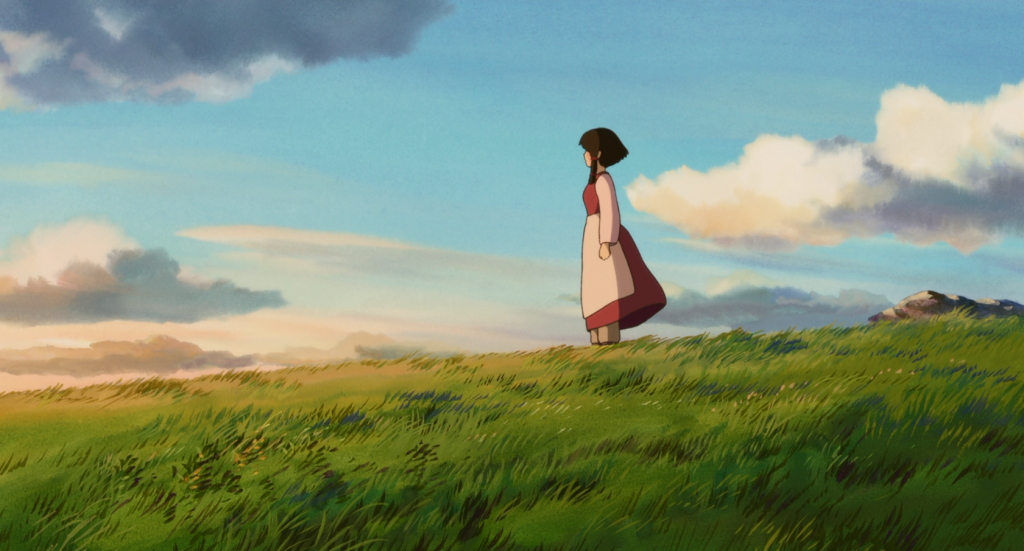 And while I hate to play the compare-contrast game all over again, it’s simply all too noticeable how Goro handles his villains compared to his forebearer. Almost all of Hayao’s villains are so gray and nuanced that they rarely ever fit under a simple moniker such as “villain” or “anti-hero”. Even his more traditionally “evil” characters, like Muska in Castle in the Sky, have motivations that you can understand, even if you can’t possibly relate with them. The villain of Tales From Earthsea, the witch Cob, certainly has a motivation, but it’s one that we’ve seen a million times — to gain eternal life, and thus, incomparable power — and isn’t depicted with any sort of relatability. Even worse is her main henchman, Hare, who kidnaps people, sells them as slaves, has a maniacal laugh straight out of a low-rent Saturday Morning Cartoon, and even attempts to rape the love-interest in one scene. These are all villains who are simply evil for the sake of it, and when compared to the complexity of, say, Lady Eboshi of Princess Mononoke, they falter ever harder.

And yes, I can’t help but compare and contrast Goro and Hayao. The film opens with a son killing his own father. Intentionally or not, the subtext is undeniable. Goro attempts to differentiate and one-up his progenitor by doing almost the exact opposite of what made Hayao such a legend. Instead of whimsy, we get empty portent. Instead of likable characters, we have an emotionally overbearing protagonist who is easily manipulated by the villains to betray his own mentor due to how much of a putz he is. Instead of a meaningful usage of silence, Goro’s quiet moments nearly induce catatonia. And instead of imbuing the fantastical imagery with meaning and payoff, we have images that are as fabulous to look at as they are coldly distant, like an out of reach toy a fussy parent won’t let you play with.

Understandably, reactions were mixed by both Japanese and Western audiences. That didn’t stop the film from being a huge success at the Japanese box-office, but it also didn’t change the fact that Goro Miyazaki remained an unproven director of animation. Hayao Miyazaki finally saw the film, and eventually collaborated with his son for another project… but that’s for another time. Instead, speaking of Hayao, we return to him on the next installment of the Studio Ghibli Retrospective, with his take on The Little Mermaid fable, Ponyo. 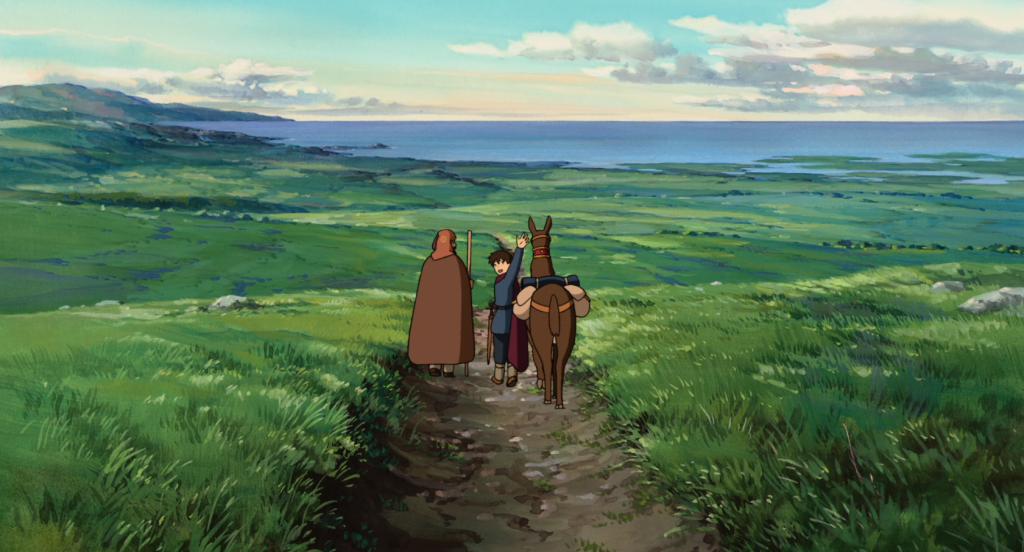 3 thoughts on “The Studio Ghibli Retrospective: “Tales From Earthsea””