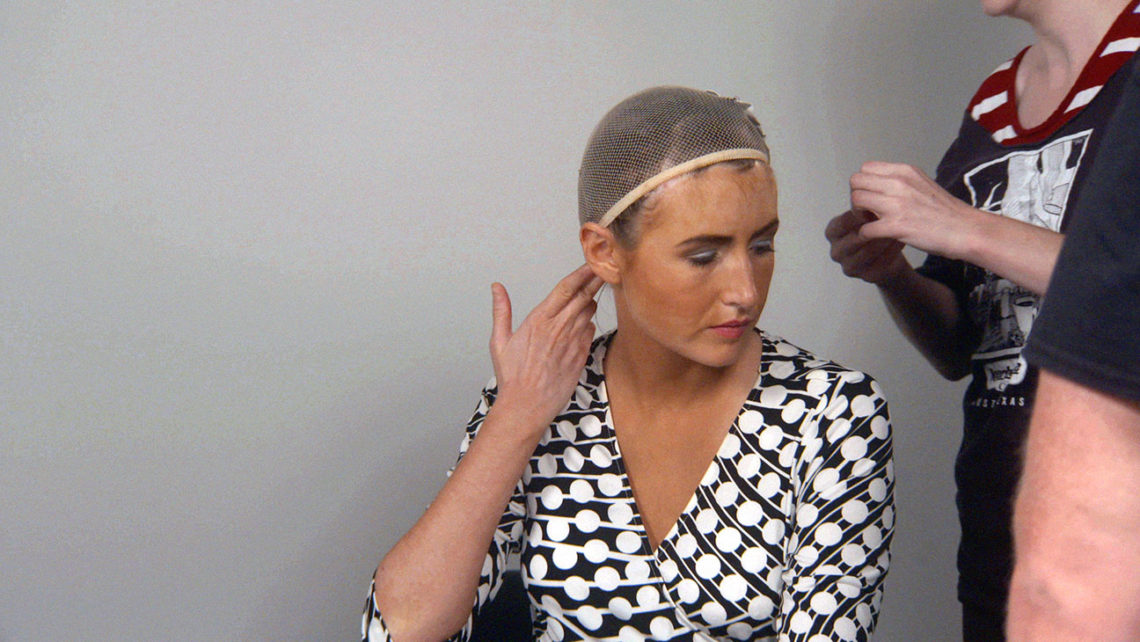 The American indie superstar talks to Tina Hassannia about the performance process and her latest role in Kate Plays Christine.

The titular actress in Robert Greene’s new docudrama Kate Plays Christine is Kate Lyn Sheil. The down-to-earth, New York-based actress has built a strong but understated presence in American indie filmmaking in the last decade or so in a range of small-to-large roles, with stand-out performances in Sun Don’t Shine, Green and Impolex. Sheil’s also picking up recurring roles in television series like The Girlfriend Experience and House of Cards. But in her latest role, Sheil plays a version of herself: She’s the same New York actress, now under Greene’s camera, preparing to play Christine Chubbuck, the Miami-based TV news anchor who famously committed suicide in 1974 by shooting herself in the head while delivering the news on air. Kate Plays Christine is both the documentary about the making of that movie, and the movie itself. Interspersed with docu scenes in which Sheil researches the role are re-enactments of Chubbuck’s life, culminating in the scene in which she kills herself. But as Sheil tells Movie Mezzanine, the staged scenes—deliberately wooden and soap-opera-like—are designed to fail. We talked to Sheil about the preparation process as an actor, the performative nature of documentary, and the frustration of learning more about someone who took his/her own life. 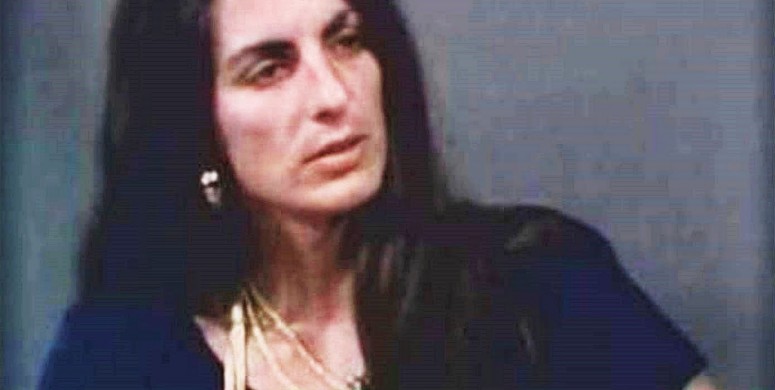 Movie Mezzanine: How do you normally prepare for a role as an actress?

Kate Lyn Sheil: Usually preparation for me is a very private experience. It’s very internal. But that’s boring to look at. So [in the movie] it was a process of externalizing what would normally be private and unextraordinary.

Did you feel comfortable bringing the preparation out into the open in front of a camera?

There were a lot of things that I felt uncomfortable about in the movie. Here’s the thing: Those reenacted scenes were designed to be failures. I knew Robert wanted them to be bad. I knew this performance preparation was a little bit useless, so it was okay that the preparation I was doing was useless, a little hollow, and purely for show. The way that Robert shot the movie meant there was room for breaking the fourth wall. So at one point I do, and say, “I would be sitting in a corner if you weren’t filming me!” So my misgivings about it do make their way into the film. Certainly, if I were really preparing, I would do as much research as I possibly could. I don’t personally find costumes help me; I would never walk around on the Fourth of July dressed up as in an amalgamation of 1970s attire. But that scene is something to look at. It’s this complicated thing where the real part I’m playing in the movie is a version of me that’s preparing to play Christine.

Had you ever been in a documentary before?

Robert and I have known each other for 10 years. When he was in the nascent stages of making Actress, it was going to be a triptych about 3 different actresses in different periods of their careers. I was supposed to be in that, so we filmed some stuff, and then I was under the impression that I had blown him off because I secretly hated the experience of being filmed that way and I was desperate to get out of it. But I thought, don’t worry about it, and then he also hadn’t gotten in touch with me. Then I bumped into him at a party and he embarrassingly, apologetically said, “It’s just getting more clear to me that the movie is going to be about Brandy [Burre] and I feel so bad.” I’ve never been more relieved to be cut out of a movie! That experience of having a camera follow you around while you actually do things in your real life—I just hated it. It was very embarrassing. He followed me at one point to a Q&A I was doing for another movie, and I felt like, “how ostentatious, who do I think I am?”

When [Robert] told me that I’d be acting the entire time [in Kate Plays Christine], playing a version of myself, well, maybe reality would step in—like, that was my apartment at the beginning of the movie, but for the most part I’m in Florida, in a totally foreign world, doing things I don’t normally do in my real life. And also acting, pretending to do something that I’m not actually doing. I felt comfortable doing that, because that’s what I know how to do. 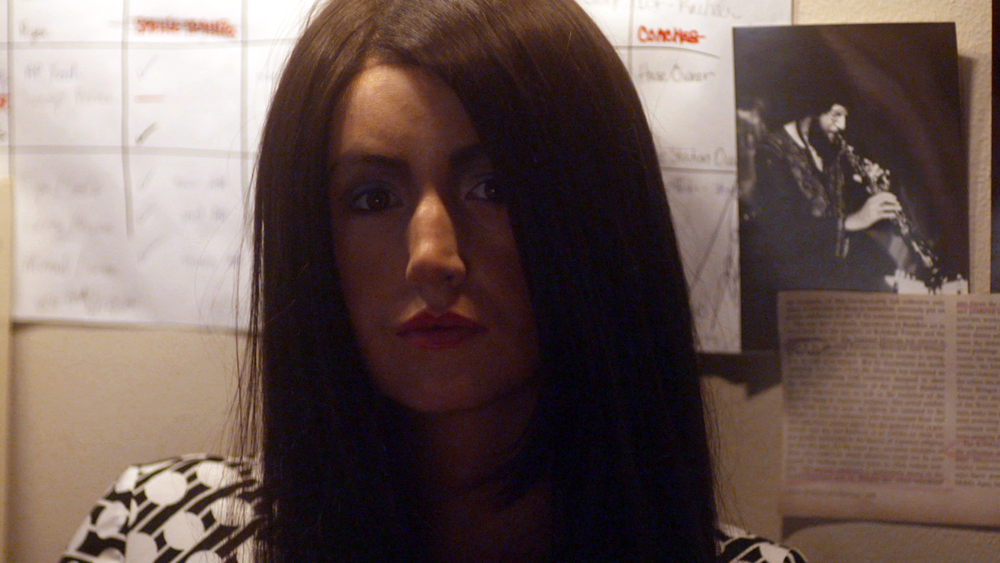 If I weren’t actively thinking about it, I wouldn’t have clued into the fact that you were playing a version of yourself. But of course, no one is really being themselves in a documentary.

You can’t have a camera pointed at you and not perform in a way. Everyone does.

While I don’t know you personally, I can see that you bring a lot of yourself into your performances across all your work. Seeing how a “version of Kate” would prepare for a role naturally got me curious to know what the real Kate does when she prepares for a role.

Honestly, it’s mostly me sitting and thinking, and trying, and going through ideas. First of all, I’d probably have a script! But I’d go through every line and think: How is that different from how I would say it? What are the differences and similarities? It’s an endless process in figuring that out and where there are spaces between characters, and what is between those spaces, and what is creating that space. But I’m sure there are actors who would prepare in more performative ways—it’s not out of the question—but that stuff strikes me as a little bit false. Like, did that really help them? But who knows?

Let’s not get started on Jared Leto.

[Laugh] Exactly. My preparation involves sitting around and thinking endlessly. But it’s all so internal until I feel prepared and then it gets on its feet. So we were sort of putting the cart before the horse, which is nicer to look at.

Even if you were playing a version of yourself, the scene where you finally watch some footage of Christine was very moving and believable. By that point, you’d taken on aspects of her personality.

That was the idea from the beginning, that the reenactments would be failures, yes, but there would be a change in the version of myself I was playing where I’d be losing myself in a more real way. Seeing footage of her was a very shocking experience. To hear her voice and see the way she moved, it felt meaningful somehow. I felt appreciative that I got to see her.

Despite the performative nature of the film, your curiosity in her shines through as authentic.

My interest in her is genuine.

Kate Plays Christine begins its theatrical run at the IFC Center in New York City on August 24, and will expand its theatrical release across the U.S. More screening information can be found here.