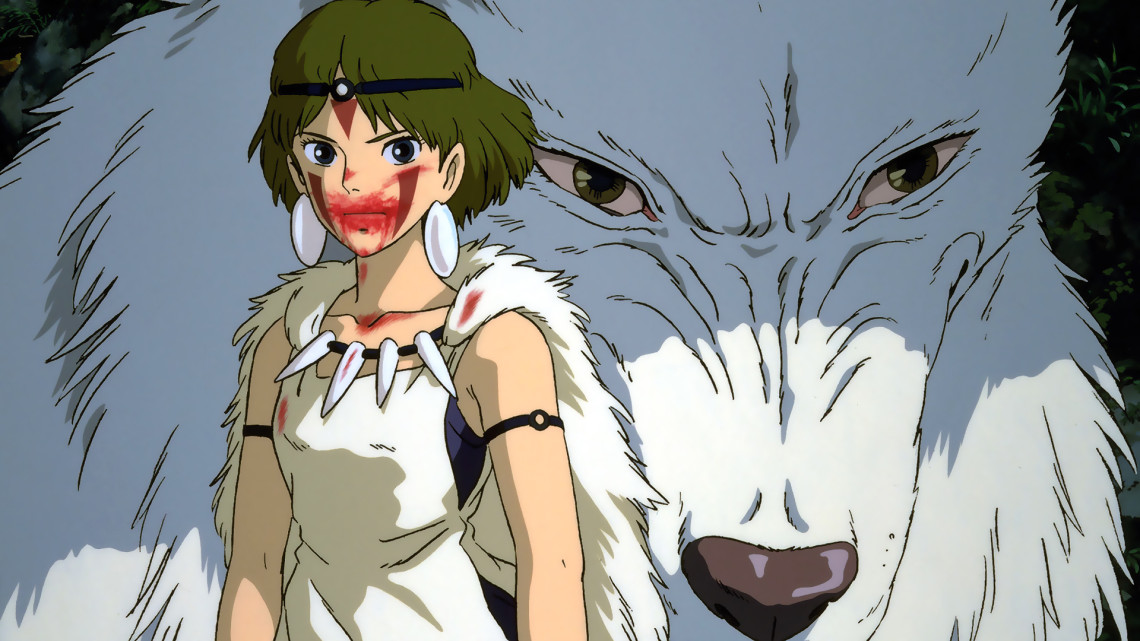 Studio Ghibli was constantly proving what animation could be capable of, but it took 12 years for them to produce their first real “epic”. If other works of Japanese anime like Akira and Ghost in the Shell showed how animation could bring stunning sci-fi visions of the future to life better than most live action films, Miyazaki’s Princess Mononoke was the studio’s attempt to create a classical, old-fashioned epic that rivaled the likes of Akira Kurosawa’s Seven Samurai and Ran, or even Hollywood-produced fare like Lawrence of Arabia and Ben-Hur. At two hours and fifteen minutes, the film took longer to make than most of their films (five years between Miyazaki’s last film Porco Rosso and this). The amount of effort that went into it can always be seen and felt.

Melding elements of traditional fantasy, and Japanese folklore, Princess Mononoke takes place in medieval Japan, when samurai and forest gods were of abundance, and industrialization was just reaching its crowning phase with the dawn of the Iron Age. Our story begins with Ashitaka, a warrior who opens the film by protecting his village from a powerful demon that’s possessed a boar god. In killing the beast and saving the villagers, he’s afflicted with a curse born from the creature’s hatred, and thus, he must bear with him the hatred of men and nature alike. Seeking to free himself from this curse, which will undoubtedly kill him if not lifted, Ashitaka ventures to the forest to seek help from a Deer God, who has a mastery over life and death.

In doing so, however, Ashitaka finds himself thrust right in the middle of a war between two factions: an Ironworks fortress that seeks to modernize by removing the natural landscape and stripping its materials for iron, and the forest creatures, who are rebelling against the humans. In the latter faction is San–or Princess Mononoke, as she’s formally called–, a human girl who was abandoned by her family and raised by wolves, swearing her allegiance to the creatures of the forest. She continually attacks the iron fortress, repeatedly attempting and failing to assassinate Lady Eboshi — a monarch in charge of the burgeoning iron industry. Like another Miyazaki character, Nausicaä, Ashitaka must find a way to bring peace to both sides and discover if he even belongs in any one stance. 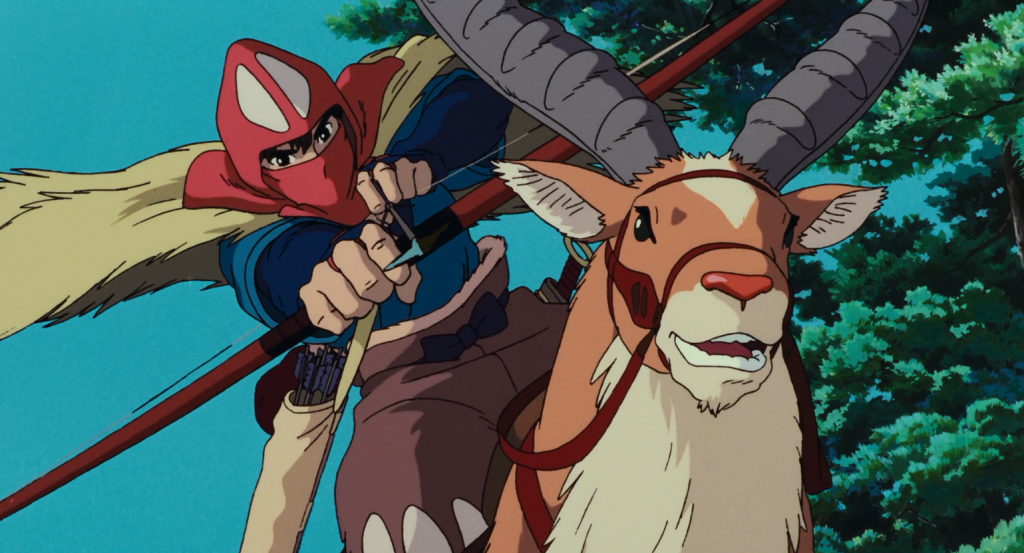 Both he and San are outcasts; one by circumstance, and the other by nature. They are the lone outliers in this war between man and the environment. Ashitaka, belonging to the human world, but magically tied to the forest, and San, a human constantly at war with her animal instincts. Their dichotomy is rich and complex, as is the film’s depiction of conflict in general

Princess Mononoke‘s greatest feat is in crafting a story that could’ve been so easily simple, but manages to be more morally complex than even the most epic live-action films. While the film has a very clear environmentalist message, it in no way feels pro-nature or anti-modernism. It’s not quite an anti-war film; more of a “pro-peace” one. Each of the film’s varying factions are shown with detail and Miyazaki’s typical humanism. It’s not even just as simple as man vs. forest. Even the creatures of nature are divided, with the apes getting in the way of the wolves’ progress, and the boar clan trying to act out their own agenda. The humans, meanwhile, are just as divided as the animals, with samurai, iron workers, and a group of hunters all fighting for control of both the forest and the future of mankind.

There’s so much going on that it’s a wonder that Miyazaki can keep everything so coherent and manageable without losing the film’s epic and purposefully convoluted scope. Of course, with all this complexity for the bigger picture, the film’s intimate moments feel somewhat short shrifted, as not enough time is spent between San and Ashitaka (although their parallels are still wonderfully written and thought out). This is the exact opposite of what happened with Miyazaki’s Nausicaä of the Valley of the Wind, a similar fantasy epic with an environmentalist bent and a man vs. nature story. That film, however, was more focused on intimate character details than the intertwining political struggles of its divided factions. Princess Mononoke, by comparison, doesn’t have a character that feels as well-rounded as Nausicaä, but its incredible attention to detail for each of the struggling societies’ needs and desires is so rich that it makes up for it. 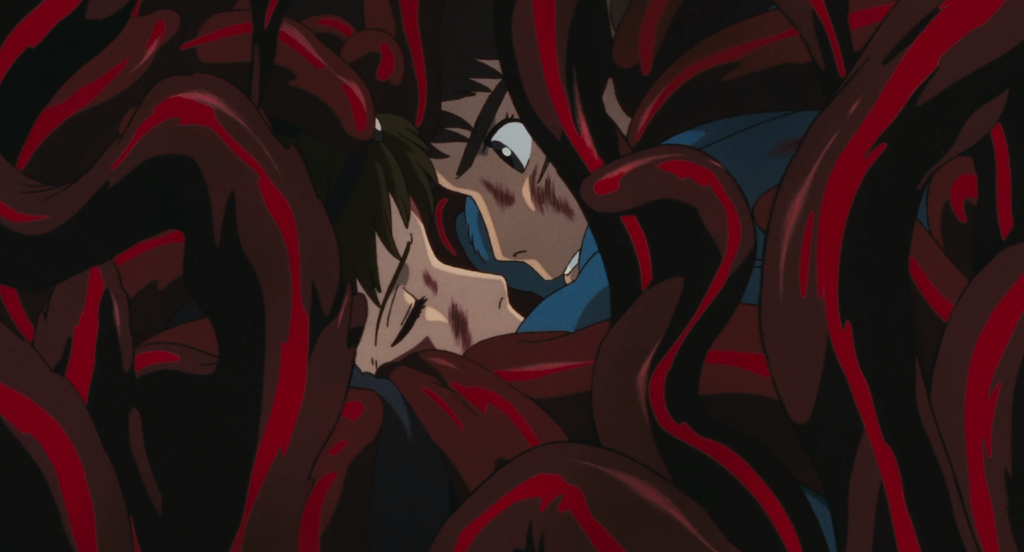 This complexity also extends towards its environmentalism, which, as with all Miyazaki films, manages to not feel preachy. Environmentalism has been around even in the backgrounds of most if not all of Miyazaki’s work. I’ve already been over these themes in my Nausicaä and Castle in the Sky pieces, but even films like My Neighbor Totoro and Kiki’s Delivery Service have a genuine love for the natural world. This film is no different in its reverence for nature, but it also recognizes the importance of modern human development as well. The forest gods, while wise, are cold and resentful. The human world, on the other hand, contains livelihood, love, and compassion. When you see the inside of the industrial ironworks factory, they’re not working out of a militant desire or spite for the natural world (as in so many films of this ilk). The factory workers laugh, play, and genuinely believe that their work will better mankind, unaware that the natural world around them they consider a nuisance is just as important.

This is in stark contrast with Studio Ghibli’s other environmentalist film, Isao Takahata’s Pom Poko, in which the forest creatures were all too human, even being forced to take on their appearance in order to survive. While both films are completely different, they get at a similar truth: no matter how much nature resists it, human development and modernization is inevitable, and instead of fighting it, ways must be found to fully integrate and coexist with it.

Unlike Pom Poko, however, this is the only film of Miyazaki’s to be made strictly for adults. Princess Mononoke is surprisingly gruesome and gory, but Miyazaki’s handling of violence is, in its own way, kind of tasteful. When violence happens, Miyazaki never lingers too long. During one of the film’s many shocking moments, when one of Ashitaka’s arrows inadvertently chop off a samurai’s two arms and pin them to a tree, the violence is so sudden and startling that it manages to remain shocking without being overwhelming. Instead, what Miyazaki lingers on is the aftermath of the violence: huge gashes on a giant boar whose flesh has been rend from the inside out, the vomiting of blood, the scar on Ashitaka’s arm after being cursed. This is a film not about the violence of war, but of how it affects the world around it, forest creatures and humans alike. 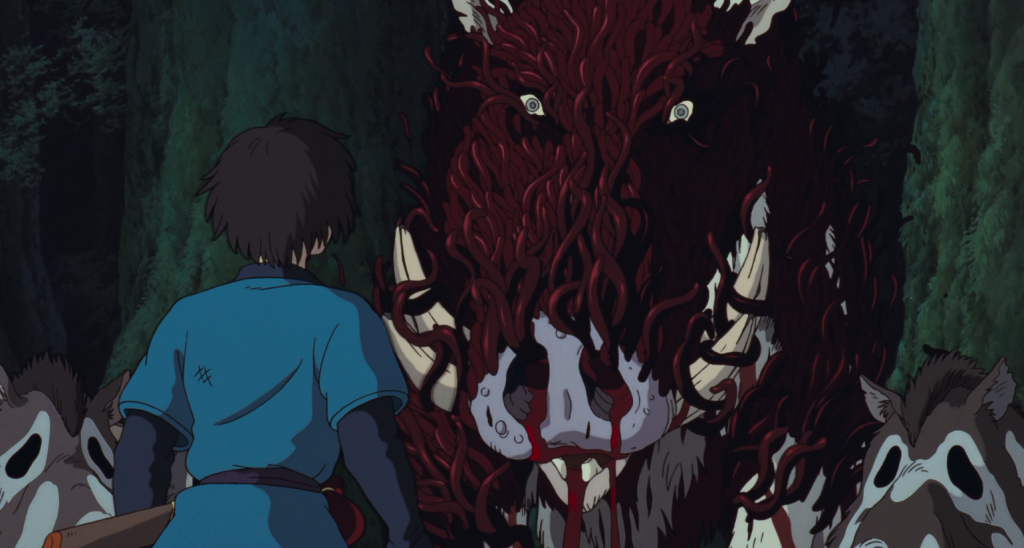 Another thing the film has a surprising amount of complexity towards — and it’s another theme found in a lot of Miyazaki films — is its subversion of gender roles. Most of the factory workers are women, and the leader of the fortress, Lady Eboshi, is a powerful monarch who happens to be female. She’s hired female workers so that she can end the prostitution ring and give women more productive societal roles. This alone is a very interesting, believable, and fascinating subversion of gender stereotypes, especially in regards to ancient Japan.

It’s easy to mistake this notion as yet another example of how Miyazaki tended towards progressive female characters, but that’s ignoring the bigger picture. Giving this detail more complexity and grayness is how, in a way, Eboshi is using these more modern notions in order to exploit women and the underclass for her own means, rather than benefit them. Here, Miyazaki ends up subverting his own progressiveness, baiting the audience and then giving us something that’s even more difficult to wrestle with. Eboshi is the ultimate adversary for this story: someone who wears a mask of benevolence in order to manipulate the masses to her own desires–a wolf in sheep’s clothing. It’s kind of amazing that she still ends up feeling just as sympathetic and human as the other characters by the film’s end. It’s just one example of many regarding the layers and layers of pathos and detail that Miyazaki brings to each of the film’s factions. 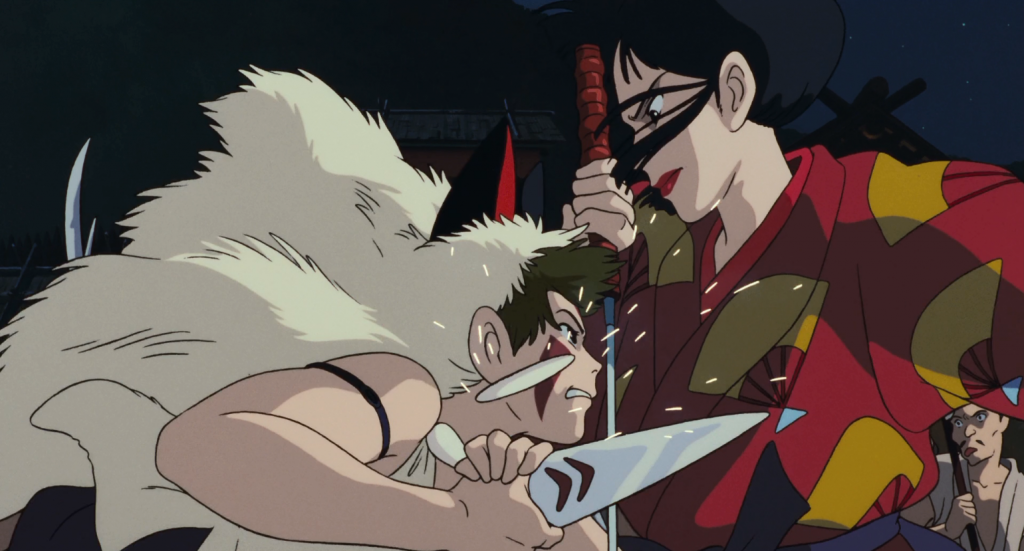 Princess Mononoke, as with all of Studio Ghibli’s films, is visually resplendent. Their hand-drawn animation is as beautiful and painstakingly detailed as ever, with the subtle addition of computer effects being employed for the first time in a Miyazaki film (the first time the Studio has used computers was actually Takahata’s Pom Poko). Being one of the most expensive animated films to be made in Japan (a $23.5 million budget), the money certainly shows.

But it’s the film’s designs that really make Princess Mononoke. Its depiction of medieval Japan feels right at home with any classic Akira Kurosawa samurai picture set in the same period, with the more fantastical set pieces perfectly melding into its aesthetic. The two sequences showcasing the demon, the beginning and climax of the film, with the bloody snakes writhing around the infected creature, is both astounding in the amount of animation that’s going on, and disgustingly inventive (and inventively disgusting) in its design. Then there’s the design of the Night Walker, which is made up of a kind of ethereal slime that seems to hold within it stars and souls — the master of life and death. Everything about this film’s visuals is alive and beautiful and unlike anything you’ve ever seen before. 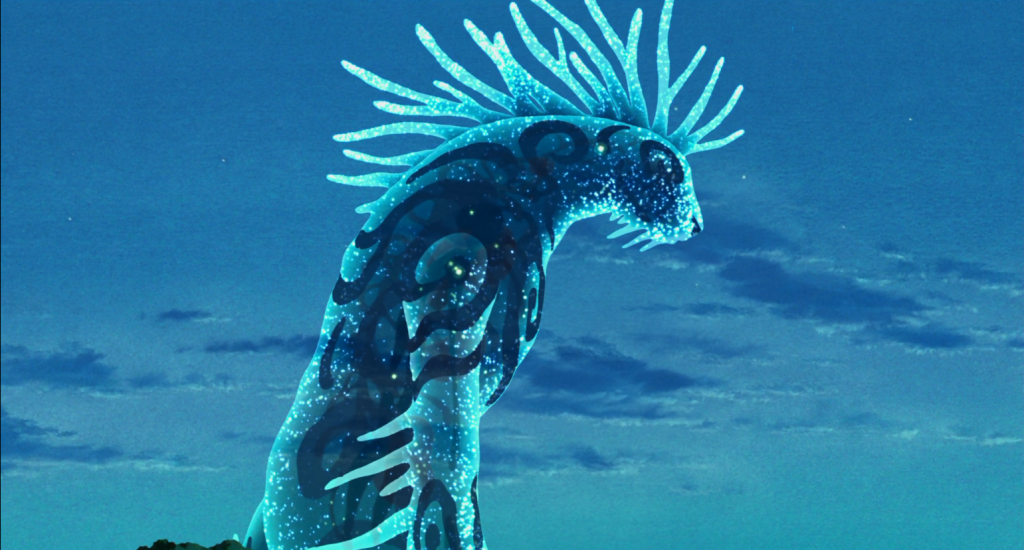 Princess Mononoke isn’t among my personal favorite Miyazaki films, mainly for that one problem that I mentioned earlier–which is more of a personal preference than an objective complaint–, but there’s no denying the mastery behind this animated tale, which succeeds in its mission to take animation to a whole new level with its epic scope and complexity. It is fully deserving of its status as a landmark achievement, and I always manage to find new things to appreciate with each rewatch.

What I appreciated more with my most recent rewatch was the film’s ending, which could’ve easily gone down the formulaic Hollywood romance path, and instead went for the braver, more intelligent option. Roger Ebert summed it up better than I ever could with his review: “There is a remarkable scene where San and Ashitaka, who have fallen in love, agree that neither can really lead the life of the other, and so they must grant each other freedom, and only meet occasionally. You won’t find many Hollywood love stories (animated or otherwise) so philosophical.” Had Princess Mononoke ended with San and Ashitaka together, it would’ve negated its vision of man and nature coexisting in a relationship that is unintrusive and truly supportive of one another. And it’s that kind of thought that makes Princess Mononoke the classic that it is. 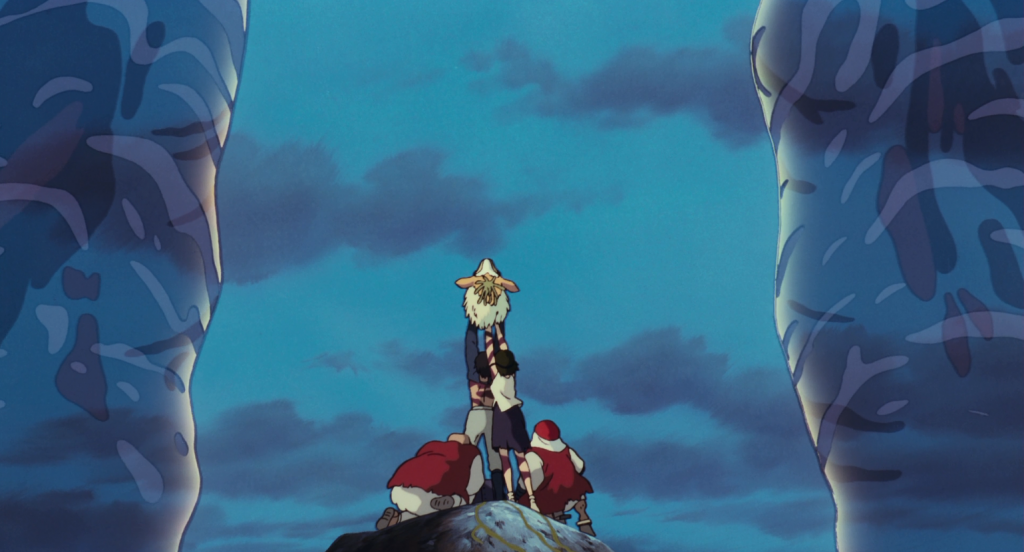 Like each of the Studio’s previous films before it up to Kiki’s Delivery Service, Princess Mononoke topped the Japanese box office the year of its release. But that’s not the only milestone it achieved. It was also the first film to surpass 10 billion yen at the Japanese box office, and the first animated film to win Best Picture at Japan’s National Academy Awards. With Miyazaki’s biggest success to date, he had a tough act to follow. But what he ended up making next however, might actually be his best film.

But before we can get to that, we return to Isao Takahata, as he continues to experiment with animation even further. Next time on the Retrospective: My Neighbors the Yamadas.