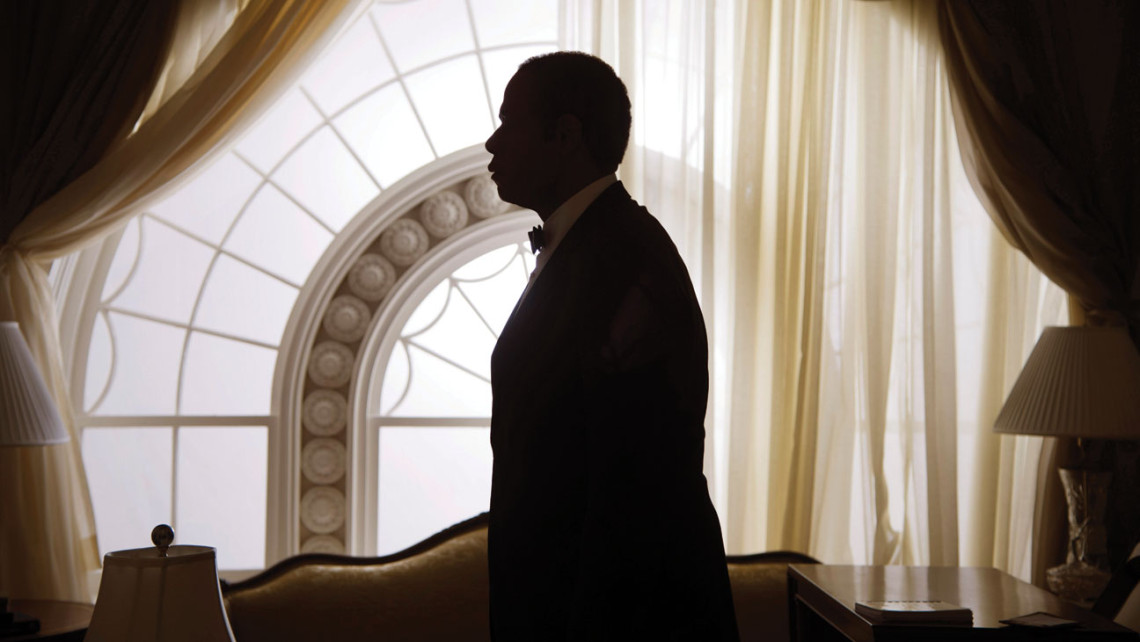 ‘Lee Daniels’ The Butler’: PG-13 Prestige with a Hint of Freaky-Deaky

The trailer for the movie formerly known as The Butler looked like the love child of Stanley Kramer and Irwin Allen’s casting agent. Here was an old-fashioned “prestige picture” with an all-star cast in unusual roles. At its center is Forrest Whitaker playing a fictionalized version of the man who served 9 U.S. presidents as the White House butler. Being Black and a servant in the days of Jim Crow required a form of anonymity, which made The Butler the perfect, nondescript title for this film. Or so I thought.

When Warner Bros. sued Harvey Scissorhands over the title, The Weinstein Company took a page from the playbooks of John Carpenter, Tyler Perry and Cecil B. DeMille: They put the director’s name in the title. Two weeks before opening, The Butler became Lee Daniels’ The Butler.  This was the movie title equivalent of Dorothy opening that black and white door and discovering a Technicolor Oz. Because Lee Daniels is a freak who works out his demons onscreen in ways unsuitable for the old school Hollywood message picture. His “Guess Who’s Coming to Dinner” would have had Spencer Tracy discovering his daughter under a sweaty, butt-naked Sidney Poitier. “Meet mah fiancee, Dadd-ee!” she’d yell.

This is why I’m a Lee Daniels fan, and I make no apologies. I was on Team Paperboy and put Precious on my ten best list that year. Even the dreadful Shadowboxer benefitted from its wacko casting of Helen Mirren and Cuba Gooding Jr. and its batshit crazy levels of nudity, sex and violence. Every auteur sees his fears and perversions through the camera’s viewfinder. Daniels looks through his and sees realism colored by a pulp sensibility. This results in racial and sexual scenarios stretched beyond the breaking point of comfort, and you can tell Daniels enjoys making you squirm. For better or worse, there aren’t too many minority directors willing (or able) to go down this freaky-deaky road. I find this fascinating.

Had the Oscars not already gone for the full-brunt, “you nasty!” Lee Daniels, I’m sure TWC would have called this movie something else, like Forrest Whitaker Gump. What I’m curious to see is how the Academy will respond to an on-the-surface mellowing by Daniels. I say on the surface because underneath It, Daniels is still exercising his trademark insanity. Not five minutes into Lee Daniels’ The Butler, there’s a lynching, a rape and a murder. Granted, the rape occurs offscreen as does most of the murder victim’s brain splatter. But these events announce that, prestige picture or not, the viewer shouldn’t get too comfortable.

Cecil Gaines (Forrest Whitaker) is our tour guide in this Around the Cullud World in 80 Days style extravaganza. He is joined by Miss Sofia Herself, Oprah Winfrey, as his alcoholic wife, Gloria. They make a great couple, with Oprah matching the Oscar winner beat for  beat. In fact, Winfrey is one of the two actors who walk off with Lee Daniels’ The Butler whenever they’re onscreen. (The other is my doppelganger, Cuba Gooding Jr., who plays this film’s raunchy Black id.) 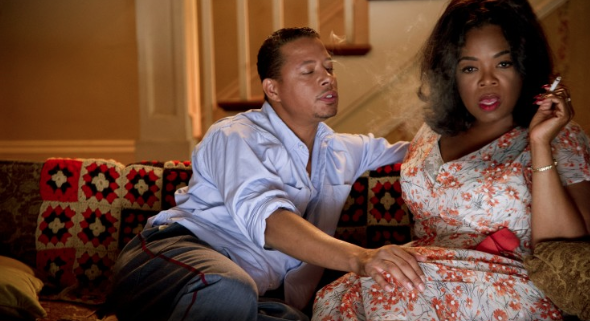 Whether it’s slurring drunkedly while Terrence Howard touches her tig ol’ biddies, or dancing, Afro-clad and sexy as hell, to Soul Train, Winfrey is memorable. She inhabits Gloria from the inside out; her phrasing choices and how she addresses the camera and her co-stars always feels real. She’s boisterously external while Whitaker looks at times as if his pain is an anchor pulling him further within himself.

Cecil has a lot of pain to suppress. After his father is gunned down in front of him, young Cecil (Michael Rainey Jr) is taken under the wing of a plantation owner (Vanessa Redgrave) who gives him lessons on serving White folks in the house. “You should be invisible,” she tells the young boy. As a teenager, Cecil leaves his mother (Mariah Carey), who has been driven crazy by abuse, and sets out to find work up North. He gets a server job at a fancy D.C. restaurant courtesy of his temporary mentor Maynard (the great Clarence Williams III). Maynard continues Redgrave’s teachings about servitude, and when Whitaker assumes the role of Cecil as an adult, he seamlessly stitches those lessons on invisibility into his performance.

Cecil is so good at serving “de White folks” that a customer recommends him to the White House staff. The interview is hilarious, with Cecil proving to his Black interviewer that he’ll make “a good house nigger.” “Are you political,” asks the head butler interviewing him. When Cecil says he isn’t, screenwriter Danny Strong throws a red meat line of dialogue to the audience: “There’s no room for politics at the White House.” Cecil gets the job, and his journey through the times that are a-changing begins.

At the White House, the parade of oddly cast Presidents co-exists with a colorized Upstairs, Downstairs vibe. Cecil’s co-workers include Lenny Kravitz and Daniels’ stand-in, the aforementioned Cuba Gooding Jr. Cuba’s first lines of dialogue are a joke so dirty the PG-13 rating forces the sound man to obscure the punchline. (The PG-13 doesn’t prevent you from reading his lips, though.) These scenes, along with Cecil’s party sequences at home, are funny and joyous; they show the personalities leeched from the characters the second they interact with Whites. We never forget that Blacks are only fully visible in Black company. 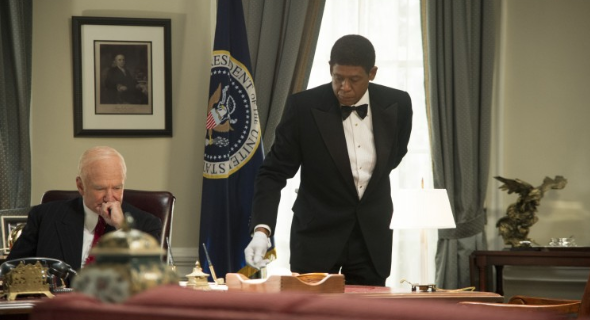 As for the Commanders-in-Chiefs: If Bill Murray can be FDR, why can’t John Cusack be Nixon? In fact, Cusack’s just fine as Nixon, as are Robin Williams, Alan Richman and Jane Fonda as Eisenhower and the Reagans. (Fonda’s Mommy even shakes her ass as she walks away!) James Marsden’s John F. Kennedy is looked upon with the eyes of the Black grandmother who had pictures of MLK, JFK and Black Jesus on her mantle. Liev Schreiber’s LBJ  is crude in all the ways Lee Daniels characters should be. Whether taking meetings on the toilet (“Cecil, get me some more laxative!”) or addressing his butler staff (“When did he start saying Negro?” asks Cuba, “That nigga says nigger more than I say nigga!”), Schrieber commands his few scenes.

Just like the Black women who raised their employers’ White children, the White House keeps Cecil from his home life. As Gloria crawls deeper into the bottle, and into dangerous flirtation with randy neighbor Howard (Terrence Howard), Cecil’s sons traverse separate paths to adulthood. The elder of Cecil’s sons, Louis (a fine David Oyeloko) becomes a member of the Black Panthers. The younger son volunteers for Vietnam. Louis figures in the film’s most blatantly symbolic (though very effective) moment: A sit-in Louis and his fellow Fisk University students attend is intercut with Cecil setting the White House table for dinner. In both, it’s a visually rendered dinnertime juxtaposition between being invisible and refusing to be invisible.

Louis, who hates his father’s servitude, is the source of some controversy surrounding Lee Daniels’ The Butler. Seems the butler whose life provides the basis for this film didn’t have a militant Black son. Of course, “based on a true story” is given more scrutiny when the true story is brown, but I see what Daniels is doing here. As a Black man in the rare position of telling a Black story through the eyes of Black characters, Daniels needed to show both sides of how we dealt with our treatment in America. The actual footage of abuse Daniels uses is not only a reminder of days gone by but a wake-up call about how those days may slowly be returning. So screw the complainers: If John Nash can have an imaginary albino and win Best Picture, Cecil Gaines can have Stokely Carmichael as a son.

Strong’s script ticks off the events and the actors believably depict them. At the center is Whitaker, who like Tim Robbins in Mystic River contorts his imposing frame into a convincing meekness. It’s almost as if he disappears before your eyes, descending into some pit of internal sorrow and/or solace. Unlike Louis, he represents the older generation who hopes for change through non-violent means, with a faith in the government that will eventually dissolve. It’s Whitaker’s finest hour onscreen so far.

In my 42 conversation with Steven Boone, I said Black folks will cinematically overcome when we’re given the same kind of corny Americana treatment White heroes are usually afforded. I should have also included us getting a big screen tour through American history as seen through an African-American filter. Lee Daniels’ The Butler provides that without forsaking the identity of its filmmaker or its characters.

This is Oscar bait, to be sure, but just remember: The director of Precious and The Paperboy is holding the fishing rod.

3 thoughts on “‘Lee Daniels’ The Butler’: PG-13 Prestige with a Hint of Freaky-Deaky”