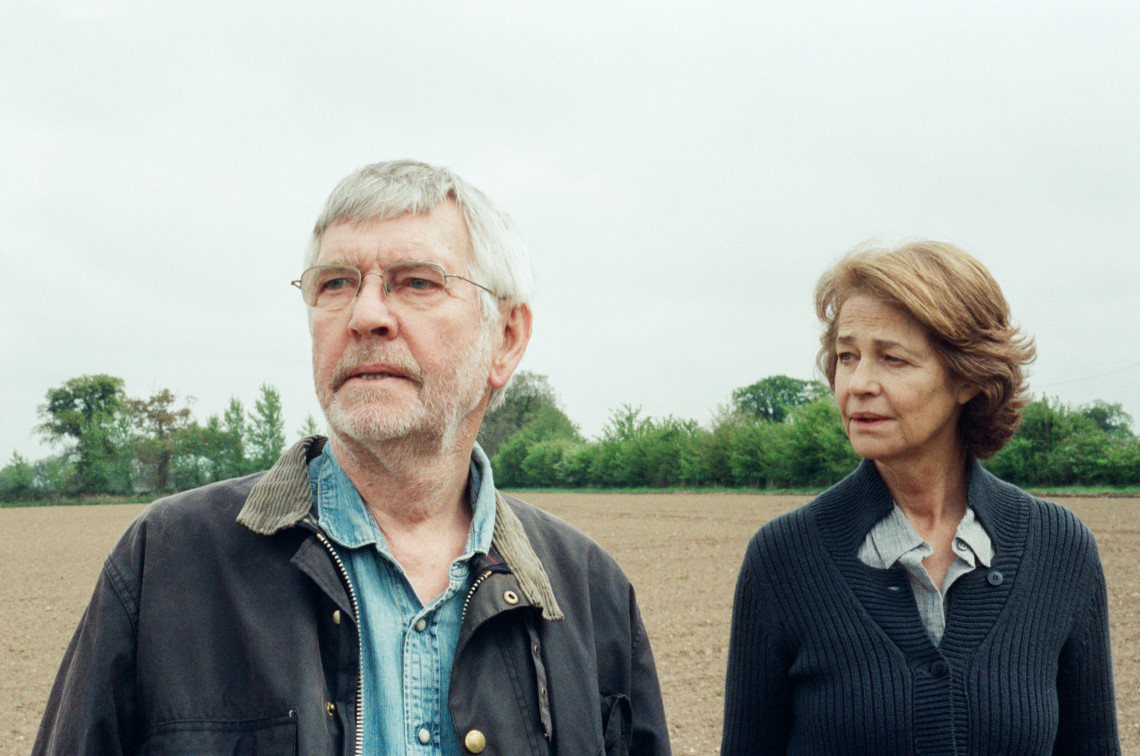 Set against the black of the screen, the only sound we hear in the opening credits of Andrew Haigh’s 45 Years resembles that of a cartridge changing, as if one of those seemingly ancient negative projectors were being perused, the names and production companies replacing the photographs. The idle hum of the machine sings its one-note melody, the song of the past as manifested through technology gradually showing its age.

The implied presence of antiquated technology is somewhat ironic considering Haigh’s previous film Weekend (and his HBO television series Looking), in which contemporary technology was one of the primary arbiters of discourse regarding communication and excavating characters’ interiority. In Weekend, Russell and Glen meet by cruising, by keep in contact through text message; Glen uses an older tape recorder for his art project examining projections and identity, and Russell notes his sexual encounters in a Word document on his laptop.

But it’s deliberately analog technology that informs the way that Kate (Charlotte Rampling) and Geoff’s (Tom Courtenay) interpersonal dynamic will play out in 45 Years. It’s a letter…one that comes in the mail…one that is on paper…one that is tangible…almost as tangible as the tension that besets the two once Geoff reveals what the letter contains. The two sit near one another at their kitchen table—and suddenly, Geoff isn’t there. The remnants of the past that explode in his face are like a glitter bomb, a shock to the core and impossible to get rid of.

Haigh is pragmatic: He acknowledges that we may spend the rest of our lives trying to recapture the past, but also of the fact that such a wish is impossible. Even so close to the party that will celebrate the couple’s 45th wedding anniversary, Kate notes, “We’re not trying to recreate the wedding.” It’s stated in a matter-of-fact sort of way, where one can tell she’s cognizant of the fluctuating impact of her actions on the relationship and, conversely, of the actions Geoff has made. No attempt is made to change it, or to plunge oneself into an imagined past that’s been frozen in time by ice or photographs or other means. Out of breath after a dance, she whispers to Geoff, “We’re not 20 anymore.” And despite the inevitability of its passage, Geoff tells Kate, “I like not knowing the time.”

In 45 Years, Haigh has departed from the handheld naturalism of Weekend; instead, his camera operates like a ghost, often observing from corners and through doorways. The light flutters its way into the house, but shadows (perhaps of uncertainty) are cast in every corner. Its multilayered frames also speak to the idea of the many constructed identities we create for ourselves, evident in the hesitant reveals of many lives. Haigh’s exploration of this idea underlines much of his work, as in Weekend, where Glen’s art project concerns the identity one projects during a hookup.

Though superficially time is the main difference between Weekend and 45 Years—the former covering two days and the latter a week—they’re really the same. Time’s temporal reality makes no difference between couples, as one is either constantly learning something new about the other person, or one is never able to fully, explicitly, nakedly unravel themselves. The work of contextualizing and recontextualizing meaning in a relationship—sexual, romantic, or otherwise—is never done. As each facet of the other person is discovered, the dynamic shifts ever so slightly.

The way Rampling reacts to these pivots in understanding their relationship is captivating: Her stoic looks at Geoff persist throughout the film, but they gradually become more and more of a façade. Her iconic “look” has been praised for its malleability and enigmatic nature over the years; in 45 Years, she allows it to be paradoxical: filled with both strength and vulnerability, power and deep pain.

Songs of lost love, of committed love, of adoration and infatuation are infused throughout the film, like stains of personal history on an old picture. They’re allowed to play until they aren’t. Kate deliberately shuts off her car radio when it begins to play Gary Puckett and The Union Gaps’ “Young Girl” like it’s a searing ache she’s trying to relieve herself of. Here is yet another object testing her stoicism, her face sporting a look of supposed unwavering vitality.

It’s hard to lay the blame on Geoff, exactly, but his preoccupation with the past is both something to sympathize with as well as something that is weaponized. During sex, Kate tells him to open his eyes; in this context, we can intuit what he saw—what he continues to see—when he closes them. Courtenay makes his character’s increasing decrepitude moving, imbuing his character with a delicateness to obsession. His voice, once durable towards the beginning of the film, becomes fragile and unsure. Rampling’s potency in her voice is more emblematic of hurt than of health. It’s the sound of someone wounded.

For Haigh and his characters, the relationship between the past and the present is a sadomasochistic one. Haigh conjures these sensations of pain and pleasure with acuity, its voyeuristic cinematography at once tempted to seek answers and yet reluctant to hear them, striking the heart with a burn that, though twinges, engenders an unquenchable thirst for that same pang again and again. Exposing his characters and his audience this way allows him to access the most humanity, to explore it unflinchingly and to let it overwhelm one. The conceits of his films sound simple—a brief encounter and the culmination of a marriage—but Haigh’s execution of these concepts is confrontational and, in its own way, daring. By refusing to cut between conversations, he exposes the piercing emotional realities underneath what characters say or don’t say to each other.

Dennis Lim’s essay for the Criterion release of Weekend was titled “The Space Between Two People.” In it, Lim notes, “We’re so used to seeing dialogue-heavy scenes edited in traditional shot-countershot style that it can be startling to watch a long, leisurely interaction that allows us to fully apprehend the chemistry and the space between two people, the thrilling fact of their being in each other’s physical presence.” Such an imagined and literal space may be the element that will define Haigh’s work past and present: two people separated by mentalities, emotions, realities, authenticities, and time. But it’s Haigh’s specificity that allows that space between the audience and the film to become infinitesimal. It’s a delicate intimacy that can take some filmmakers years to achieve, yet Haigh, with only two features under his belt, has accomplished this in seemingly no time at all.

One thought on “Exploring Past and Present
in “45 Years””