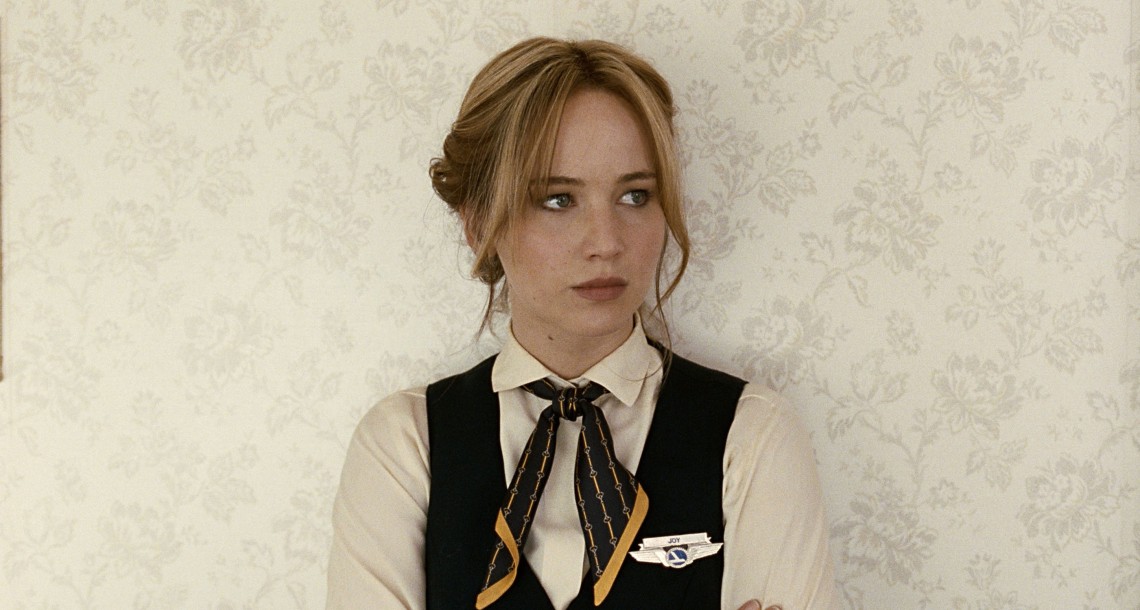 David O. Russell has always displayed a knack for formulating a dose of playful, hectic kitsch. From American Hustle’s big hairs, sideburns, and bare-chested outfits to the chaos-seeking, loudmouth families in The Fighter and Silver Linings Playbook, his chatty and oddball characters usually stand a safe distance away from my sensibilities. Because they’ve frequently failed to capture a sense of gratifying honesty, his films to date have evoked an array of reactions from me, ranging from admiration (Three Kings) to outright hatred (American Hustle). My reluctance to see Joy turned into shock upon seeing it (twice): This might just be the first David O. Russell film that I love.

Having trimmed down his signature overwrought madness and significantly dialled up a guileless and genuine sense of emotion, Joy is joyous, featuring a killer Jennifer Lawrence—undoubtedly one of our finest working actors—who carries the film on her young shoulders with authority. Lawrence might be a frequent figure onscreen nowadays, but this might just be the first time since Winter’s Bone that the movie star has been given a complex role that is a true match for her mind-blowing range of talent.

Playing a somewhat fictionalized version of real-life Miracle Mop inventor Joy Mangano, Lawrence gives the 21st-century viewer a new J.C. Wiatt (Diane Keaton in Baby Boom) and Erin Brockovich (Julia Roberts) rolled into one. A divorced mother of a young daughter, Joy lives in a Long Island house with her daughter, her divorced parents Rudy (Robert De Niro) and the romantic, soap-opera-obsessed Terry (Virginia Madsen), and her grandmother (Diane Ladd). If the house wasn’t full enough, her ex-husband (Édgar Ramirez), whom we get to know via flashbacks through their divorce, crashes with them too. Joy wastes away her life working at an airline counter and doing chores, despite being an ex-valedictorian and an active inventor. We learn that she never got the credit for a quick-release dog collar she invented due to her mom failing to patent the product under her name.

But Joy’s luck turns when her father starts going out with the rich, brilliant, and sharply attired widow Trudy (Isabella Rossellini), whom Joy convinces to invest in her newest invention: a self-wringing mop. An emotionally resonant scene features Joy introducing her product to QVC to be sold via TV infomercials, where she meets Neil Walker (Bradley Cooper), who demonstrates the orchestration of telesales to Joy with buoyant energy. Cinematographer Linus Sandgren nails the scene’s hopeful, mobilizing energy with long, twirling takes reminiscent of a Ferris wheel ride.

The story predictably foretells Joy’s success as a triumphant businesswoman with multiple other invention ideas under her belt. Watching her get there feels remarkably fulfilling. This is an underdog story that is refreshingly set among a number of exceptional women and a forward-thinking man who gives her the one shot she’s undoubtedly earned herself.

Despite an untidy third act, which involves Joy going after unorthodox businessmen to protect her patent rights and money, Joy still finds a sense of redemption and ends on a high note. In its slightly rushed finale, the story smartly comes full circle when Joy helps out a new female inventor. Thankfully, the relationship between Joy and Neil remains a friendship, allowing the film to focus on what the story’s really all about: one woman’s self-actualization to become a successful inventor, a profession that has been historically male-dominated.