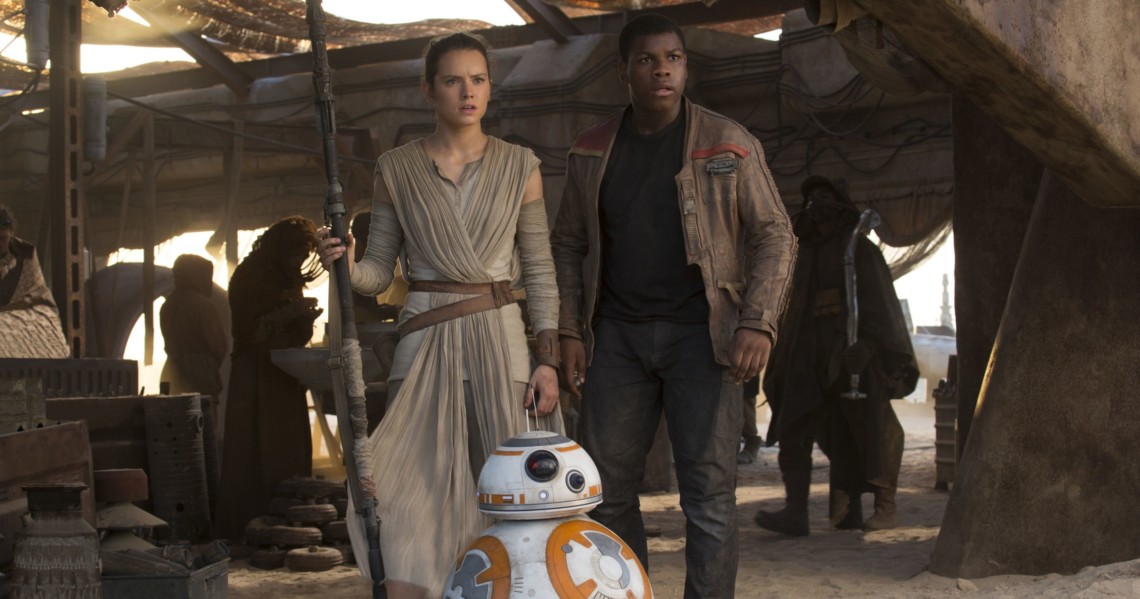 The Star Wars prequels are failures for many, endlessly catalogued reasons, but among the most egregious is the reliance on volumes of exposition to establish background and intervening details. Instead of letting actors suggest individual and collaborative histories through body language and chemistry, the films presented their characters as pre-packaged as their toy counterparts. The Force Awakens exists at the opposite end of the plot spectrum, in which the rush to establish new characters, new stories, and a new business plan for endless sequels and spinoffs results in the near-total elimination of anything not resolutely focused on the present. The closest thing to exposition is found in the opening text crawl, which notes that the Empire has rebranded under the name of the First Order and do battle with an off-the-books Republic force called the Resistance.

The lack of exposition is a welcome change from the norm, and a great way to cede every possible second of screen time to the new, vibrant cast. And for the first act, the concision of the action is a breath of fresh air for a stagnant franchise, nimbly cutting between, then linking, the arcs of disillusioned First Order stormtrooper FN-2187 a.k.a. Finn (John Boyega), hotshot pilot Poe Dameron (Oscar Isaac), and desert planet scavenger Rey (Daisy Ridley). In these early scenes, the film establishes a balance between the epically scaled and intimately observed. In particular, the scenes of Rey simply getting by on Jakku—foraging through the cavernous bowels of a downed Star Destroyer, racing her speeder across a landscape as a small dot against the looming shape of that gigantic, rotting ship—are among the most beautiful in the entire series.

Things start to fall apart, however, once the action picks up, at which point the film shifts away from development to a series of carefully timed reveals of old characters and objects that each receive an extended pause of dead air, as if Abrams programmed in applause breaks worthy of Kramer sliding through Jerry Seinfeld’s apartment door. Framed through this lens, the tendency for the narrative to repeat the beats of A New Hope, though perfectly logical in a saga founded upon the constancy of the hero’s journey, comes off as pandering fan-fiction.

Yet if these constant callbacks and reintroductions disrupt the flow of the film, it’s only fitting that the film is best recalled via individual moments of inspiration. Abrams has never staged action with much invention, but the storyboarding of this film’s setpieces shows an ability to juggle a great many moving parts. For example, in a sequence that juxtaposes an aerial fight with a ground skirmish in a Resistance outpost, the movements of both footsoldiers and starfighters are exquisitely choreographed in distinct and intersecting actions. A climactic lightsaber duel between Rey and Sith lord Kylo Ren (Adam Driver) lacks the flash and dazzle of the prequels’ twirling wire-fu but is far better for displaying a sense of total character consistency. Ren’s wounds from a previous fight limit his range, while the untrained Rey, seen early in the film using a staff for self-defense, uses a saber in the same fashion, making jabbing motions that are expertly targeted but fail to use the entire blade’s potential.

The most consistent source of pleasure, however, comes from the characters. In an era in which “complexity” in heroes has come to be understood as brooding, even destructive anti-heroes, the unrelenting goodness of Rey, Poe, and Finn is not a regression but a relief, proof that characters can be fully realized while remaining optimistic and earnest. Isaac, Ridley, and Boyega all have moments of severity and despair, but they are never better than when their wide-eyed reverence and awe is communicated through the characters. Their giddiness plays out in small moments, like the brotherly elbow slaps between Finn and Poe, or Rey’s look of amazement at her own abilities when she commandeers an impounded Millennium Falcon and ably dodges TIE fighters.

Not to be outdone is Driver, who makes Kylo an intriguing contrast for Vader. Anakin is like a wunderkind athlete, come from nothing and exposed to a level of power he cannot resist, while Ren sees power as his birthright and embodies toxic entitlement. It’s also nice to see Ren forced to suffer the politicking of officers Vader used to choke by the baker’s dozen; his interactions with Domhnall Gleeson’s unctuous General Hux are a subtle comic highlight riddled with mutual pettiness. Yet the true show-stealer is Harrison Ford, who maintains Han Solo’s sense of rakish disregard but flecks it with regret and experience. Whether modifying his chemistry with Carrie Fisher’s Leia to account for years of ups and downs or silently documenting Rey’s competence as a pilot, Ford invests Han with a rare show of empathy and humility that gives the film much of its gravity. Rey and Finn look beside themselves when they meet Han and quiz him as to whether all the legends about him and his friends happened, but it’s in Ford’s quiet, emotional insistence that “It’s all true” that the film reaches its winsome peak.

There’s a lot to recommend this picture, more than just about anything in the prequels and even in large sections of the original trilogy. The notion that the new faces of the biggest franchise of all time are two people of color and a woman is marvelous, its action is never less than solid, and Abrams does a fine job setting up all the pieces to reignite the franchise. But it is the latter aspect that gives pause and draws a firm line in the sand between the previous Star Wars films and everything to be made going forward. Star Wars, for all its flaws and follies, is a work of art, financed by a studio looking to make a profit but also made by a young talent with ambition and a distrust of the system that bankrolled him. The Force Awakens is a product of the system that its forebear propagated, which is to say that it is a product. It’s a frivolous misapprehension to expect a sixth sequel to have the same world-altering impact of its original, but it’s difficult to get excited for a film that is judged a success almost exclusively on the terms of how well it sets up future products to be consumed.

60 thoughts on “Back to Basics in “Star Wars: The Force Awakens””