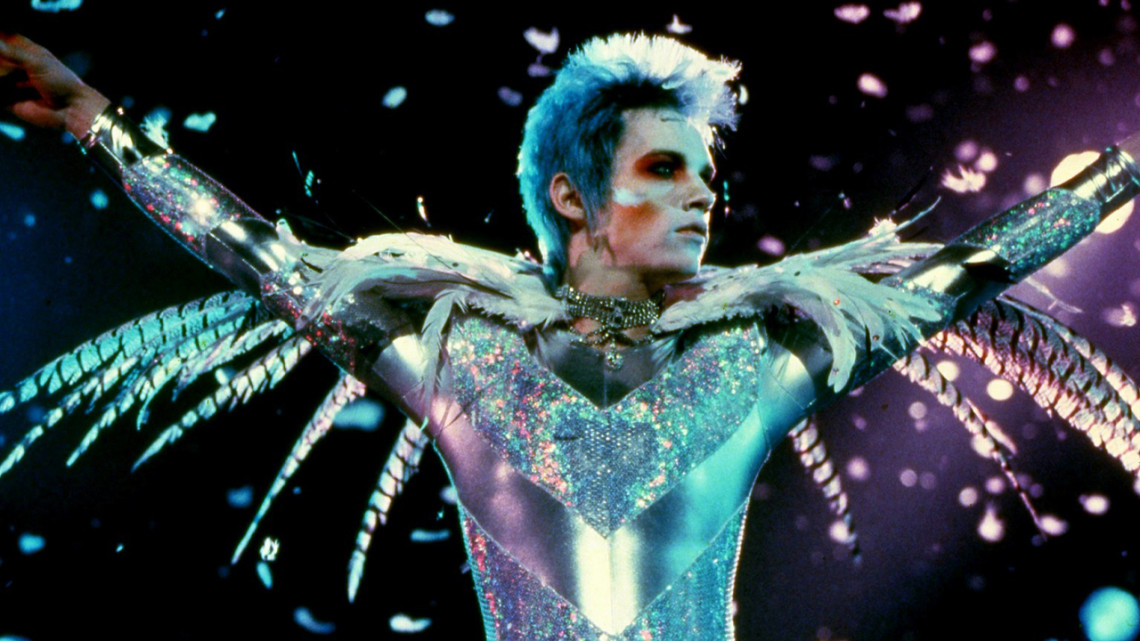 Of Todd Haynes’s wry deconstructions of celebrity, Velvet Goldmine appears to contain the subject closest to the director’s heart. The glammiest scenes of the film are as wild as Haynes has ever gotten, with Maryse Alberti using stage lighting to dim everything around its roman-à-clef rock stars to maximum the chromatic pop of their outlandish costumes and the frenzy of their sexual liberation, which goes one further than the heterosexual revolution of the ‘50s and ‘60s by venturing into other orientations. It’s obvious that the symbolism of major pop stars aligning, even if for image purposes, with gay and bisexual identities had an impact on Haynes. To make the grandeur and sweep he assigns to this cultural moment unmistakable, he bases the structure of the film, with its constantly peeling layers of artifice and half-truths, on that of Citizen Kane.

At the heart of the film is Brian Slade (Jonathan Rhys-Meyers), an obvious stand-in for David Bowie. But to make an avatar of Bowie the center of gravity is to rely on the stability of a black hole. Bowie was and is a chameleon who changes personae like underwear, and the legal necessity of using a fictionalized version of the star only deepens the unknowability of the figure being tracked in a career post-mortem by gay reporter Arthur Stuart (Christian Bale). Arthur’s arc, of contending with his family’s feelings about his sexuality and his ongoing self-discovery, could be seen as the director inserting himself into the story, a queer Almost Famous. In practice, however, the film regularly critiques its own sense of wonder, undercutting the occasional whimsy with probing exploration of the veracity of the glam liberation.

Buried within the film and its rock travelogue is Haynes’s usual semiotic examination. The stars who pervade the movie are not merely representative of themselves but the real people they mimic, as well as the celebrity icons that put images onto TV screens and the elevated position of a live stage. As such, Haynes digs into the way that sexuality was used as a provocation, and how personal identity could become mere fodder for stirring controversy. The closer Arthur gets to Slade, the more that he and his comrades—Lou Reed/Iggy Pop mix Curt Wild (Ewan McGregor), Roxy Music-incarnate Jack Fairy (Micko Westmoreland)—slip away from clarity, and the more their sexuality looks as much a pose as a genuine expression. But if this can sometimes carry the sting of being played, especially in the conclusion of Slade’s arc, the film above all adopts an ambivalent tone, one that befits its subtle articulation of sexuality as a complex, inherently performative aspect of identity. When Arthur watches stars come out on television, their garish attire muted by the faded urban backdrop of their street interview, we see the simplicity of the gesture, but also how it is magnified in the face of the overjoyed Arthur, a feeling triangulated by the disgust of his father.

Completely unambiguous, however, is how rousing the film’s musical moments are. Oddly, glam rock has aged in such a way that its polish and sheen is what has stood the test of time, as if all the cosmetics and primping preserved an image of eternal but unsettling youth. What this film does is remind everyone that punk grew out of this music by playing up its raw sleaze. When the riff to T. Rex’s “20th Century Boy” kicks up during a live performance of Slade and his band Venus in Furs, a quick, rapid zoom into Arthur’s dolled-up face freezing in slack-jawed ecstasy as the first two chords are played is a moment of immediate audience transference. When the full riff is heard, it’s easier than ever to hear the drawn-out tease of its slurring crunch, the utter sex of its distorted come-hither drawl.

Likewise, you can see the impact of music even on those who make it, as when a mild-mannered, vulnerable Curt Wild turns into a demon onstage to the sound of the Stooges’ “TV Eye.” It’s sloppy and undisciplined, played too fast and too loose as the camera abandons all pretense of formalism and just darts around the stage along with an unhinged McGregor. Compared to Arthur’s total amazement in the presence of Slade, the crowd is openly hostile toward Curt’s vulgar display of glitter and exposure, unable to cope with the unvarnished side of glam that is all exhibition and no grace. Perhaps it is inevitable that the original songs meant to ape Bowie are the least impressive, given that Haynes cannot draw upon the already encoded power of pre-existing songs, but the multimedia presentation of these numbers, complete with their own abstract music videos, is a testament to the cheekiness of the genre and how it freely muddied high and low art.

Both Velvet Goldmine and I’m Not There are scattered, elusive portraits of subjects too deliberately wrapped in their own manufactured mythos to ever give truth, but their scopes are inverted. Haynes’s Dylan film tackles an artist whose cultural expression informs the personal lives of fans, while the glam scene is an airing of personal identity that ultimately has cultural impact. Thus, I’m Not There is more of an analytical treatise on how we assign identity to cultural phenomena, while Velvet Goldmine is oddly personal and intimate. It’s almost as easy to get caught up in Arthur’s search for Slade, and when the end of the film grimly suggests that the inevitable byproduct of wielding identity as publicity is the commodification of outsider-dom and a move toward conservatism, the epiphany that crosses the reporter’s face is almost as heartbreaking as the most melodramatic moments of the director’s career.

If you’re interesting in watching Velvet Goldmine on MUBI, use your Movie Mezzanine coupon for an exclusive discount and access to a breathtaking library of cinema!