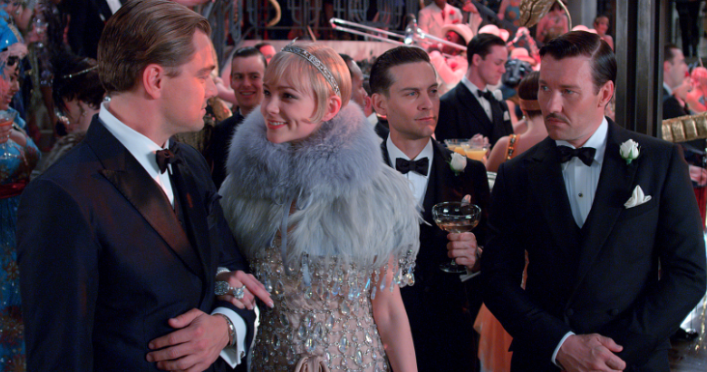 Baz Luhrmann’s fast and loose cinematic adaptation of F. Scott Fitzgerald’s masterful 1925 novel, The Great Gatsby, is, in the words of fellow Golden Age writer Ernest Hemingway, “a visual feast” to be marveled.

Reimagining The Great Gatsby, one of the most critically revered books in the history of literature, for the silver screen is a daunting task Luhrmann attacks head-on. Unlike the stale and drab 1974 Gatsby adaptation with Robert Redford, Luhrmann’s take is equal parts daring and flawed. It’s a sumptuous, visual event of a movie with an onslaught of images and colors (often to dizzying effects) that could only be created by a man who has the creative audacity to blend George Gershwin with Jay-Z. 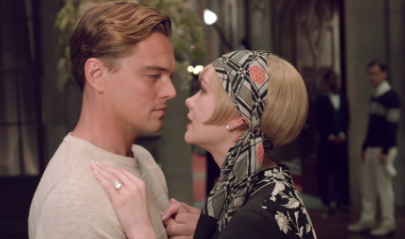 Sooner or later everyone develops their own myth of Gatsby—some claim he’s an Oxford man; some think he’s a paid assassin; and others deem him a phony. But the only person who has any knowledge of the verified legend’s past is Daisy.

Five years prior the two met in a “love at first sight” sort of moment. Gatsby was then shipped off to war and Daisy, inpatient and lonely, married Tom. It becomes evident that Gatsby’s kindness towards Nick is motivated by his desire to reignite his love for Daisy.

Although we tend to forget it, this is Nick’s story, told through his experiences, perceptions, and memory of the three months he spent away from home. Nick serves as the facilitator between Daisy and Jay, and the moral mediator for us the viewer. And yet, despite Nick being at the heart of this movie, we never fully understand or connect with him.

Still, for what it’s worth, the film is never dull or tame. Baz makes sure you’re always entranced by the 3D spectacle on display, which, although imbued with a vivacious spirit, is suffocating at times. Sequences seem to be haphazardly thrown and edited together. There are myriad party sequences in the movie, but the one that stands is out is held at Tom Buchanan’s hideaway apartment in the city, designated for him and his mistress (Myrtle played by Isla Fisher) to fool around in private.

The scene is of Nick getting drugged by Myrtle’s sister, followed by his trip into ecstasy, which includes heavy consumption of booze by everyone at the party, wild dancing, and booming music coming from both inside and outside of the building. Across the street there are a pair of jazz musicians playing on the balcony while a group of black women across the way dance and scream to the soothing smooth sounds. If that wasn’t enough, Luhrmann then cuts to the inside of an apartment complex where older white men are paying for prostitution and succumbing to infidelity with women of all creed. 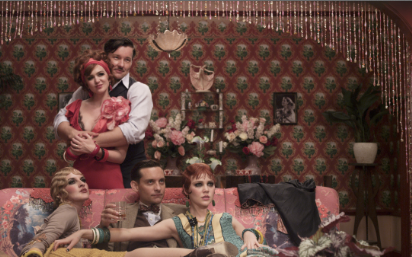 Despite this being merely one description of one scene in The Great Gatsby’s prolonged 143-minute narrative, it fittingly represents to whole movie. Characters are shoved to the sideline as Luhrmann primary focus is on the aesthetics. It’s pure style over substance. Which is a shame considering the source material is so rich in character and humanity.

Unfortunately, Luhrmann doesn’t attempt to penetrate the hearts and minds of these people. Every character and every emotion is at arm’s length. At a distance, like the green light transplanted on the dock of the Buchanan mansion that, night after night, Gatsby becomes more and more by obsessed with. For you see, the light radiating across the water is merely a mirage like the illusory and unattainable love Gatsby wishes to reclaim with Daisy.

DiCaprio does an effective job playing a man with an inexorable affinity for the future by recreating his own past (a philosophy that is contradictory by design). No matter how hard Gatsby tries, no matter how many lavish parties he throws, no matter how much money he makes, no matter how intimately he looks into Daisy’s eyes, no matter how desperately he wishes to recapture the love they once had and the passion they once shared, attempting to relive the past is ultimately an exercise in futility. Alas, Gatsby’s unwillingness to accept the inevitable fate of their relationship is not the mark of ignorance or naïveté, but rather a relentless and admirable sense of hope he constantly embodies.

And so we here we are. Receding back to Fitzgerald’s timeless melancholy tale we’ve grown to know all too well—an American dream broken, a culture clash gone unspoken, and a love never to be forgotten. With Baz Lurhmann’s manic and opulent reconstruction of the quintessential American parable we’re, yet again, for better or for worse, “borne back ceaselessly into the past.”

6 thoughts on “‘The Great Gatsby’”