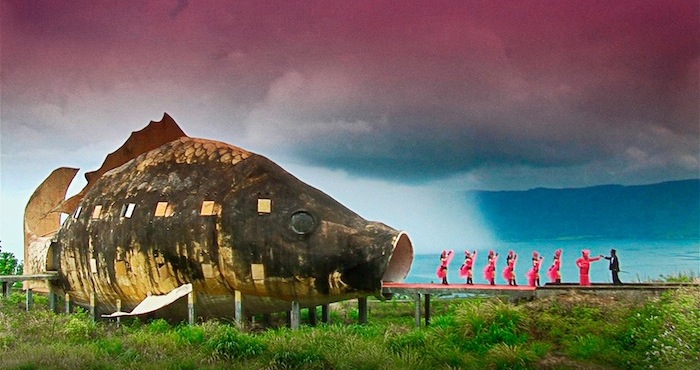 ‘The Act of Killing’: A Maddening and Unforgettable Documentary

The Act of Killing is one of the best documentaries of the year, and I don’t ever want to see it again.

Watching this film is both ideologically riveting and morally repulsive. From very early on, I wanted to walk out of the theater, but I couldn’t. It’s a challenging, unforgettable journey into the banality of evil. Lars von Trier said that a movie should be like a stone in one’s shoe. The Act of Killing is like a ball bearing.

In 1965, a military coup in Indonesia led to a massive anti-Communist purge of the country. The new government encouraged local criminals in various areas to participate in the killing. More than a million people were murdered – intellectuals, union members, and anyone else who could be accused of being a Communist. The regime established back then still rules Indonesia. The men who committed genocide have never had to answer for what they’ve done.

In this film, Joshua Oppenheimer, Christine Cynn, and an anonymous co-director visit with some of these gang-bangers-turned-monsters. The main character is Anwar Congo, a founding member of the Pancasila Youth, a three-million-strong right-wing paramilitary organization. Anwar is credited with personally killing a thousand people. He beat them to death with his bare hands. He chopped off heads. His favored method was to strangle multiple victims simultaneously with one length of wire. His old comrades are just as bad.

These men were originally small-time thugs before the military gave them license to lead death squads. The group at the center of this doc started out scalping tickets for black market screenings of American movies. Anwar and his friends were heavily influenced by what they saw in the theater – westerns and gangster films and action thrillers. They still hold a dear love of cinema, evidenced by the extravagant ways that they dress. This leads to The Act of Killing‘s central conceit: with the documentary crew following them, Anwar and the other killers re-create some of their “greatest hits” from the genocide of 1965.

What follows is a series of vignettes that are often horrifying, sometimes darkly comic, and always deeply, deeply surreal. The short bits of the movies that the team produces have terrible production value and worse acting, and it’s almost laughable… until you remember that the woman doing a poor job pleading for her life is a stand-in for thousands of real women who were terrorized by these filmmakers. Behind the scenes, the killers are always eager to instruct the actors in how to authentically beg, struggle, writhe in pain, and die. As the production progresses, they begin to use the movies to illustrate their feelings on their roles in the purge, until they are working on a scene that recreates a nightmare that Anwar has had.

Anwar is haunted by what he’s done, though that only manifests in his troubled sleep. In his waking hours, he smothers his grandchildren with affection (at one point inviting them to watch a particularly gory part of his movie) and lounges about town. His compatriots do much the same, except few of them confess to having any similar compunctions about their actions. They talk up the good ol’ days, the same as any other old timers. They pause their filmmaking for daily prayers. This is a portrait of what happens when the bad guys win. Chillingly, it doesn’t look all that different from the Western ideal of normal.

That’s where this doc begins to truly worm its way under your skin. The US backed the 1965 coup and supported the new dictator, Suharto. After all, he was so very good at killing “Communists.” One of the killers mocks the idea of “crimes against humanity” and points out how many mass killings throughout history have gone unpunished, including the US’s treatment of Native Americans. Indonesian politicians, allied with the Pancasila Youth, deliver speeches that don’t sound too far off from Tea Party talking points. It’s easy to pretend that the social contract protects us, and this is an unsettling reminder of how quickly and badly things can turn on society’s unlucky. One man talks about how he personally killed his girlfriend’s father, since the father was a Communist, and they were the enemy.

At one point, the media catches wind of the film project, and Anwar and the others are invited onto a talk show. There, they boast of their deeds, and the hosts extol them with chipper enthusiasm. At a political rally, a regional minister applauds the versatility of gangsters at accomplishing real “social change.” A repeated refrain throughout the movie is how preman, the Indonesian word for “gangster,” comes from “free man.” Anwar and his ilk are revered as heroes. They cast aside society’s constraints and did what had to be done – just like the gunslingers in the old westerns.

It’s sometimes difficult to tell which parts of the documentary are genuine and which are part of the film-within-the-film. Anwar and his fellow “actors” discuss the morality of their past while still wearing burn makeup from a recent scene. Settings which appear to be normal are undercut by theatrical, rehearsed-sounding monologues. In some ways, it’s reminiscent of Werner Herzog’s Little Dieter Needs to Fly, which similarly made use of unconventional reenactments (so it’s fitting that Herzog came on as an executive producer after seeing the movie).

That mixture of real and unreal is utterly fitting. Truth and fiction have blended inextricably for these men who have had to tell themselves so many stories in order to justify the awful things they’ve done. The worst, most haunting part is that this storytelling appears to have worked. There is little guilt to be found here.

And yet the last scene of the film, one of the best scenes of any film this year, suggests a shred of humanity still buried within. Anwar leads the doc crew to a rooftop where he once led a slaughter. He’s actually revisiting a location from earlier in the story. But the first time, it was daylight, and he had a fawning young admirer with him. This time, he’s alone, it’s night, and working on the movie has given him pause for thought. He’s already claimed that playing the role of a victim for one scene has allowed him to feel what the people he murdered felt (which Oppenheimer soundly refutes), and now he’s alone (relatively) with himself. And all he can do is dry heave, as the full weight of his actions seem to actually hit him. He retches, making some of the worst noises I have ever heard come from a human being, but vomits up nothing. He’s a shell.

The Act of Killing is maddening, sorrowful, brilliant, and unforgettable. It’s somewhat haphazard in its structure, and becomes repetitive at certain points. But this is one of those cases where the messiness only adds to the experience. Besides that, you can’t seriously argue “all the talk about how people were murdered got boring after a while” without sounding like a sociopath. Now that I’ve written about the movie, I feel a strong compulsion to never think about it again. But this ugliness is part and parcel of human nature, and it cannot be ignored. Nor can this film.