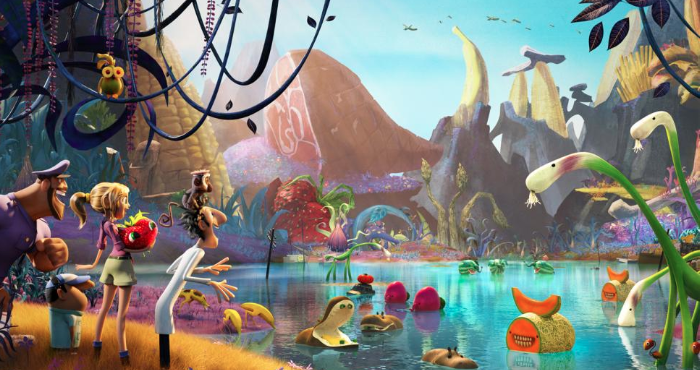 Four years ago audiences were treated with one of the funniest and most original animated films that cinemas have seen in a long time, and a personal favorite of mine, Cloudy With a Chance of Meatballs. Based on the children’s book of the same name, the film was equally whimsical, clever, and hilarious. It was the kind of movie that you could watch over and over again and could always find something new thanks to all the subtleties and intricate jokes. It also had a great message for children and adults alike, to love yourself for who you are.

Flint Lockwood, an aspiring inventor, created the FLDSMDFR (Flint Lockwood’s Diatonic Super Mutating Dynamic Food Replicator) which took over his hometown of Swallow Falls and created food weather which nearly destroyed the city. In this highly unnecessary sequel, Flint and his friends have to take care of the leftovers who have become food people, and a host of annoying new characters nearly ruin the dynamic that the first film mastered so well.

Flint Lockwood and his girlfriend Sam Sparks (voiced again by Bill Hader and Anna Faris) were the heart of the first film and their romantic tension fueled both their character’s motivations and the story’s message of independence. Here the story is almost as forgotten as the malevolent antagonist, Chester V, a famous inventor who wants to steal Flint’s machine. The plot line of this film never really takes off and feels more like a very long episode of a children’s tv series; it is not strong enough to sustain a movie.

While the main characters of Flint, Sam, Steve the monkey, Brent, Tim and Manny still carry the same spirit, the film itself lacks it. There are a few chuckles here and there but nothing nearly close to as funny as even the smaller jokes in the first film. The film is only 90-minutes long but it drags on. The seemingly pointless narrative has none of the heart that the first film did.
As a huge fan of its predecessor, I was excited to see the sequel and to return to these characters which I loved so dearly the first time around. It may be because Cloudy with a Chance of Meatballs has new directors guiding it (Cody Cameron and Kris Pearn), who fail to match the spark that Phil Lord and Chris Miller did with the original film.

Sequels always have a hard time, especially when their predecessors are as beloved and touching as the first film here is. However this sequel could have been so much better if the plot line wasn’t, quite literally,  a leftover idea.

Children may enjoy this film, but what was so impressive about the first film was that adults could equally enjoy it and not even through innuendo but simply because the jokes were sharp and original. This film may entertain a five year old, but anyone with any more knowledge may be tempted to fall asleep.

Cloudy with a Chance of Meatballs 2 leaves me feeling cloudy and with definite disappointment.