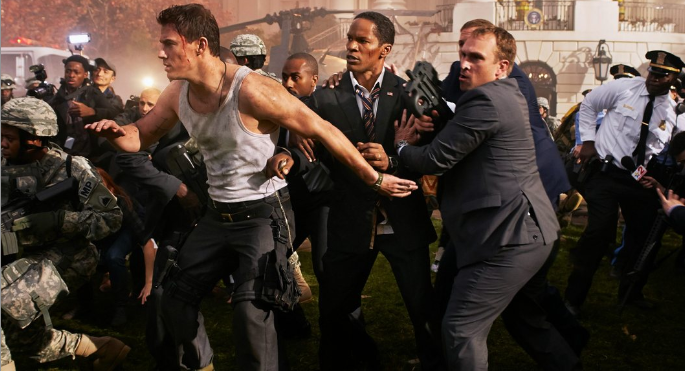 Movies are so rarely great art that if we cannot appreciate great trash we have very little reason to be interested in them. – Pauline Kael

The above quote from endlessly influential film critic Pauline Kael perfectly summates White House Down, Roland Emmerich’s latest exercise in sprawling, brain-cell-killing, campy action/comedy filmmaking that is, without reservation, great trash to be enjoyed. Such ceaselessly entertaining “trash” doesn’t come around as often as it should. Give credit to screenwriter James Vanderbilt (responsible for penning Zodiac, The Amazing Spider-Man, and more) who harmoniously crafts a downright silly, uproarious trifle that plays like Die Hard in the White House.

Instead of the heroic John McClane (Bruce Willis) we have Cale (Channing Tatum), a D.C. cop looking to work for the Secret Service and better his relationship with his teenage daughter Emily (Joey King), a precocious, gleefully patriotic YouTube blogger who insists on calling her father by his first name. After his job interview, the two embark on a White House tours. Fun is had by all until the sound of gunshots begin.

Soon, the President’s palace is overrun by methodical homegrown terrorists, killing every security guard in sight and holding each participant of the tour hostage. Cale manages to break free, determined to find his daughter and protect President Sawyer (Jamie Foxx) from danger. The terrorist’s grand demand? $400 million dollars in cash and a plane to flee the country.

The plot grows more and more ludicrous as time goes on. From the waving of an American flag in the White house north lawn to an ominous subplot involving James Woods to the President kicking someone’s head in after a terrorist attempted to touch his Jordans, White House Down manages to reinvent the term “asinine behavior.” More asinine though is the film’s facile attempt to make any sort contribution to the discussion of contemporary politics. Sawyer, a clearly defined liberal, decries our handling of foreign affairs and the mass amounts of money we spend on warfare, proposing we must seek and obtain peace with everyone. While Emmerich’s rose-colored socio-political eulogies may be valid, they’re sorely misplaced in this exploitative romp.

Thankfully the film’s primal focus is not preaching politics, but entertaining its audience. Cale and Sawyer crack-wise as they evade (and occasionally take out) enemies roaming around the Executive mansion, while Emily covertly captures (with her cell phone) the madness transpiring inside. The action sequences are cogently designed, neither flashy nor dizzying. But what fuels the movie is its sense of humor. Foxx and Tatum imbue the film with enough wit and charm to withstand most of the corny and cliched elements lining the film’s 131-minute runtime.

Aside from the occasional didactic hiccup, White House Down doesn’t take itself so unflinchingly serious — unlike Olympus Has Fallen, a film released three months ago with a similar premise. While the action in the former film may have been more thrilling (not to mention more graphic) Emmerich’s twisted vision of a country on the verge of destruction is the more absorbing piece of work.

5 thoughts on “‘White House Down’ is Quality Summer Trash”