It’s impossible to overstate, even 30 years later, how huge Eddie Murphy was in 1984. After starting stand-up as a teenager and joining Saturday Night Live in 1980 when he was just 19, he continued to grow his stardom in 1982 with his first comedy album and his appearance in 48 Hrs., which grossed almost $79 million at the box office (around $187 million in today’s dollars). He put out the hit television special Delirious in 1983, the same year he appeared in Trading Places, which pulled in $90 million (around $207 million today). But in December of 1984, Beverly Hills Cop hit theaters. It would eventually gross more than $234 million at the box office, making it the biggest hit of the year as it raked in the equivalent of $518 million in today’s dollars. To put that in perspective, the biggest hit of 2013 was The Hunger Games: Catching Fire, and that grossed $424 million. Beverly Hills Cop was Murphy’s first lead role, and it was more than a great movie: It was a pop-culture force, centered around one man whose time had come. And that man would never be the same again.

Beverly Hills Cop isn’t a comedy that happened to cast Eddie Murphy, but a film completely defined and shaped by its star. The screenplay had started life years earlier as a straight action movie and was at one point going to star Sylvester Stallone before Murphy was put into place and the script was drastically changed. The bones of the story are the same, with Murphy playing a fast-talking cop out to avenge the death of a friend, but the body is new. It’s a genuine blend of action and comedy, and its tone—a high-wire act that balances the grime of 1980s drug stories with the silliness of the era’s best comedies—would set a standard that Hollywood would spend the rest of the decade trying to replicate. 48 Hrs. may have been first on the scene for buddy-cop movies, but it was Beverly Hills Cop that more deftly captured the blend of drama and humor. Murphy’s presence is buoyant and effervescent, and it turned out to be a perfect match for the guiding hand of director Martin Brest (who would later helm Midnight Run, another of the era’s classic genre entries). The film’s impact is evident in just how many movies have tried and failed to recreate its spirit, including its own sequels in 1987 and 1994. The 1990s saw the growth of action movies peppered with one-liners, while recent entries have been heavy on the comedy but light on any real action or danger. The rebooted 21 Jump Street franchise is a perfect example of this: They’re comedies through and through, with no actual suspense or drama to them. That’s not to say they’re bad, either, merely that the fine-tuning of Beverly Hills Cop is difficult to duplicate.

It’s also a film that deftly, bluntly uses racial tension and stereotypes in a manner not often seen today in Hollywood product. Murphy’s Axel Foley has all sorts of fun at the expense of the reality that he’s a black man in a hoodie waltzing through a swank hotel in Beverly Hills, or in the moment where he confronts a black police officer for hanging out with his white partner too much. The film is uniquely positioned to this because of who Murphy was at the time: a massively popular black entertainer with mainstream appeal. Richard Pryor’s NBC show was canceled in 1977 after four episodes; by contrast, three years later, Murphy kicked off a four-year run on SNL, where he regularly addressed the notion of race and character constructs in sketches like “Mister Robinson’s Neighborhood,” in which Mister Rogers was transformed into a tenement-dwelling hustler. In his movies from this period, Murphy’s similarly willing to pull the mask off race and class: Trading Places and Coming to America (1988) both examined the expectations that come with income and social standing. Beverly Hills Cop’s honesty about the way race informs its character is exceptionally rare in movies, and hard to come by in action movies and blockbusters these days. Buddy-cop movies in the wake of Beverly Hills Cop often paired white and black characters but tiptoed around any acknowledgement of same: Running Scared (1986) and Lethal Weapon (1987) could be about anybody, really. But Beverly Hills Cop manages to be about race without having to loudly proclaim that it is About Race. Instead, Murphy’s character is allowed to have fun and explore whatever issues he comes across without having to impart any lesson through the narrative. To do this in a sketch is great; to do it in a film that outgrosses every other player that year is outstanding. 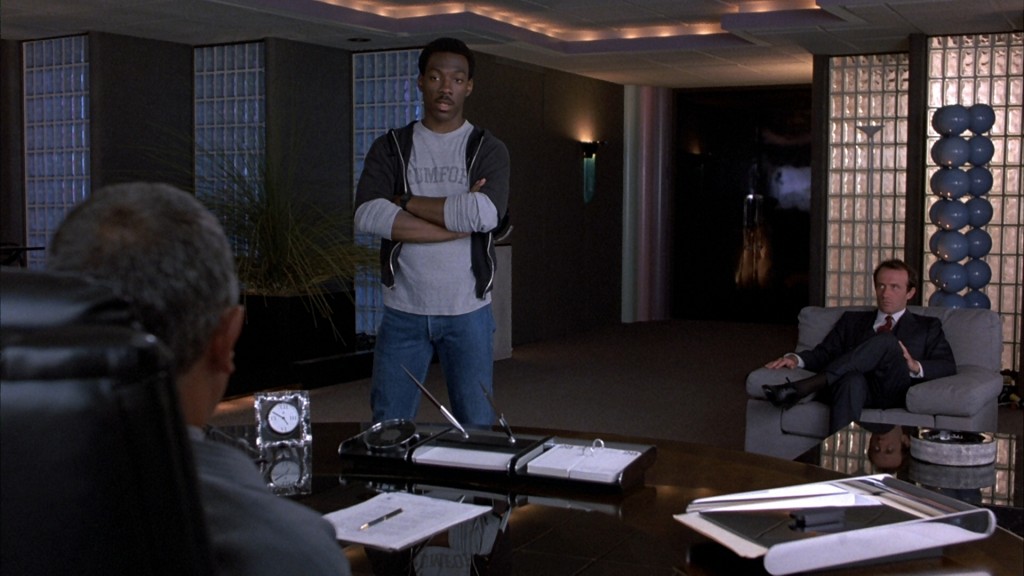 It’s hard not to chalk this up to Murphy’s youth, too. He was all of 23 when Beverly Hills Cop came out, which is a daunting age to anchor the biggest film of the year. (Just ask Jennifer Lawrence, who was 23 the year Catching Fire took the top spot.) The precociousness of youth, its power and swagger, is almost dripping from Murphy’s body in every frame. He’s so light on his feet he seems to glide through the movie, dancing through scenes with stodgy cops and dopey villains. Murphy’s completely at home here, so comfortable in his own skin that he’s able to use his body to define the energy of a given scene: lounging and loose for the comedy, graceful and fleet for the action. His attitude is one of total, cocky assurance, as if he’s daring himself to live up to the brash assertion Thomas Wolfe made at the age of, yes, 23: “I don’t know yet what I am capable of doing, but, by God, I have genius—I know it too well to blush behind it.” Murphy knows he does, too, and he lets it show.

What makes the film almost tragic in retrospect is how far Murphy has since strayed from its magnificence, his later career too often marked by grotesque mugging and forgettable family-oriented fare that feel like betrayals of the wit and intelligence he displayed in his youth. Even absurdist pleasures like Bowfinger (1999) feel thin compared to Beverly Hills Cop; if anything, he’s known now for his heavy make-up and gimmickry in films like The Nutty Professor (1996) and Norbit (2007), or lending his voice to the scattershot Shrek films, which resemble comedies but lack any real humor or intellect. As Murphy became one of the biggest stars of the 1980s, he grew more removed from the direct, confrontational, informed comedy that made him such a hit in the first place. Attempts to rebottle his lightning—two sequels to Beverly Hills Cop and a sequel to 48 Hrs.—drew diminishing returns, financially and aesthetically. Most recently, he’s drifted into the nebulous area of high concepts that don’t pay off, like playing an inveterate liar who winds up cursed to die after saying 1,000 words (A Thousand Words [2012]), or an absentee father who must entertain his daughter’s imaginary world to succeed at work (Imagine That [2009]). Beverly Hills Cop worked because its comedy was couched in a recognizable reality: You could imagine Axel Foley really doing or saying these things somewhere in California as you watched him on screen. But almost nothing Murphy’s done since then has been as funny, entertaining, or honest. Beverly Hills Cop is remembered as the arrival of a major comic player; in a lot of ways, it was also his swan song.