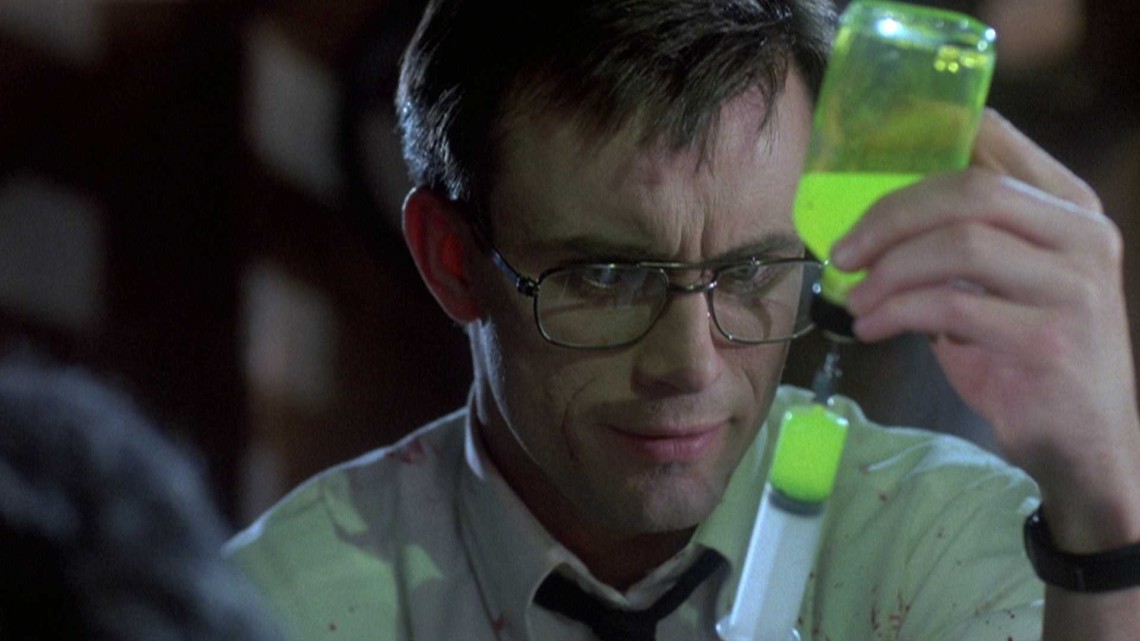 In his book Humanity: A Moral History of the Twentieth Century, Jonathan Glover discusses what he calls “the cold joke”—wringing humor out of a lack of respect for human life—as a method people often use to distance themselves from atrocities they partake in, such as torture. The cold joke, Glover wrote, “is a defensive flippancy, enabling the torment they are preparing for other people to be referred to without being taken seriously.” Glover, being an ethical and moral philosopher, articulated this more as an observation than flat-out criticism. When it comes to the darkest aspects of humanity, though, art has the power to bear witness, embody and critique, sometimes all at once.

That’s a rather high-minded introduction for a retrospective piece about a horror comedy featuring a mad scientist trying to bring the dead back to life, but it’s the only way I can think of to get at why I find Stuart Gordon’s 1985 film Re-Animator, for all its no-holds-barred gore and taboo-busting black humor, sneakily profound. It’s a film that manages to have it both ways—finding dark comedy in death while still, at heart, taking death and our emotions toward it deeply seriously—without short-changing either its comic and dramatic sides.

The comic side of Re-Animator is perhaps more widely known. Richard Band’s music score sets the tricky ironic/sincere tone: It’s so baldly reminiscent of Bernard Herrmann’s classic score for Alfred Hitchcock’s Psycho that one can only take it as some kind of deadpan parody, especially with its percussion giving it a vague rock flavor that takes some of the menacing sting out of the screeching strings. That deadpan style is also glimpsed in Jeffrey Combs’s performance as the titular re-animator, Dr. Herbert West. His prissy pursed-lip delivery oozes the kind of introversion that screams a greater comfort in the lab than among people, yet Combs manages to avoid turning him into a caricature. Stuart Gordon and co-screenwriters Dennis Paoli and William J. Norris—adapting H.P. Lovecraft’s 1922 short story “Herbert West, Re-Animator”—aren’t above winking throwaway gags here and there: an address of “666 Darkmore” here; a guard wondering about the reason for locking doors in hospitals (after all, “nobody wants in, and ain’t nobody getting out”). And then there are the various set pieces of bloody carnage, with the ever-ambitious Dr. West trying to find even fresher corpses on which to try his neon-green re-animating serum, with increasingly outrageous results—the climax coming in the spectacle of Dr. Carl Hill’s (David Gale) randy severed head and his detached body trying to make love to naked, very-much-alive Megan Halsey (Barbara Crampton), tied down spread-eagled on a gurney.

That is not to say, however, that Re-Animator is just a camp object. For all the outré humor, death is not taken lightly, and neither are the characters’ varying reactions to it. The film’s emotional center in that regard, turns out to be Dan Cain (Bruce Abbott), a promising medical student who, in his first scene, nevertheless still has a perhaps-too-sensitive side, having not yet developed the hardened attitude to death and dying that his colleagues have. (“Your optimism is touching,” a senior colleague tells him after he keeps trying to revive a patient long past death, “but good doctors know when to stop.”) No wonder, then, that, as off-putting as Dr. West is, Cain nevertheless becomes fully invested in helping him in his re-animating experiments. Even Dr. West himself seems driven by a genuine underlying seriousness, a sincere desire to try to extend human life. One can see this in his stone-faced reactions to the morbid jokes his professor, Dr. Hill, cracks in class. And when characters die or are forced into violence, Gordon makes sure to show us the horrified reactions of bystanders and perpetrators long enough for the full devastation of the moment to register; this is especially evident in the piercing cries of grief that Megan—who is going out with Cain—emits upon finding out about her father Dean Halsey’s (Robert Sampson) death.

To a considerable degree, Gordon’s fundamental respect for death enriches even the most echt-grindhouse of moments in Re-Animator. Take the aforementioned scene of Dr. Hill’s severed head and body trying to make love to Megan. It’s an outrageous scene, for sure, the kind of gleeful bad-taste moment of which cult reputations are made. But for all of Crampton’s full-frontal nudity, Gordon’s gaze is hardly as lecherous as dead Dr. Hill’s, especially because he has taken the time to establish these characters as authentic human beings, however innocent or dastardly. With a terrified Megan screaming at the top of her lungs, we find ourselves as repelled as we are laughing helplessly at the filmmakers’ chutzpah. Even the bountiful gore and viscera on display feels organic to this material and the filmmakers’ attitude towards it rather than coming off as gratuitous or calculated to shock. Like Stan Brakhage in his ever-disturbing 1971 short The Act of Seeing With One’s Own Eyes, Gordon isn’t shy about showing us the gruesome realities of death (however supernatural its causes in this case); in this context, however, the on-screen bloodletting feels like brutally honest confrontation rather than exploitative delectation.

But death doesn’t have to be treated with utter seriousness all the time. For some, death is a phenomenon to be feared; for others, it’s a passageway to another plane of existence beyond our mortal coil; for still others, it’s simply a fact of life to be accepted. The unexpected profundity of Re-Animator lies in the way it incorporates all these various responses to death, allowing us to both fear it and laugh at it at the same time. For a horror film that swims in Grand Guignol insanity, surely that is the sanest response imaginable.