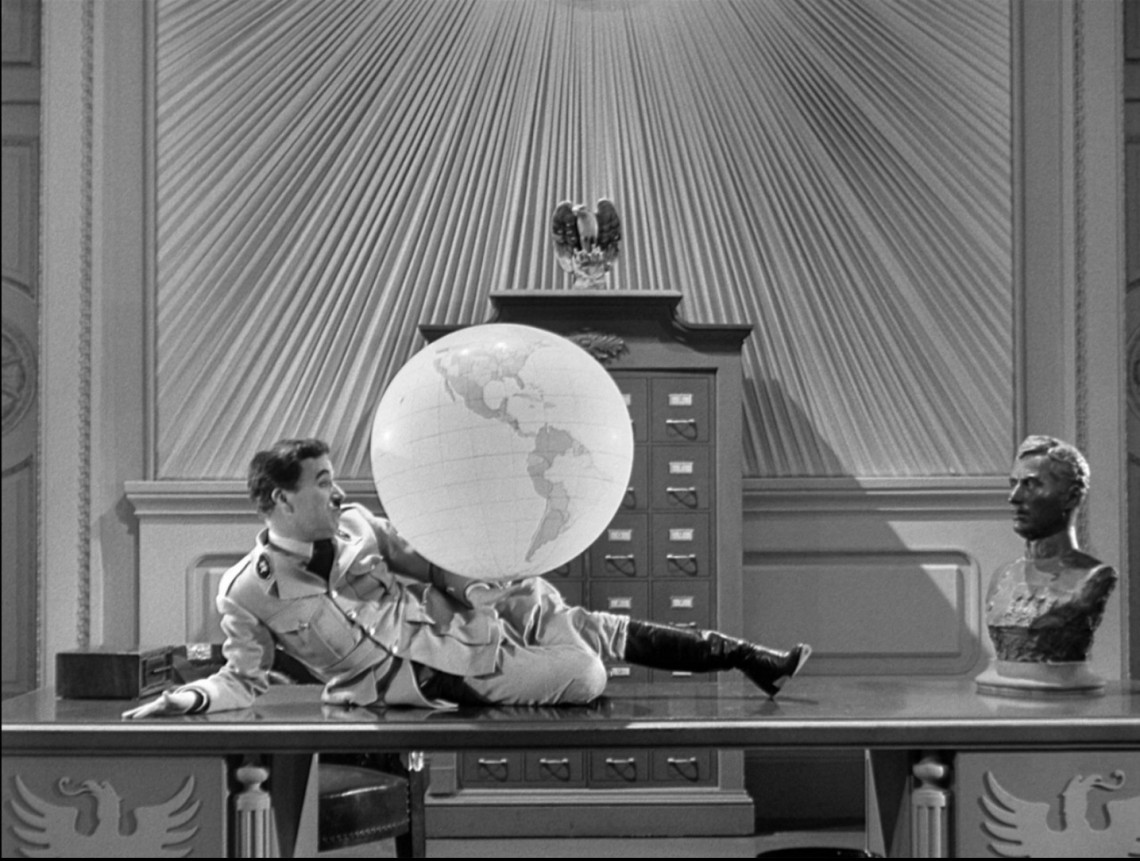 Naturally, the first joke in Charlie Chaplin’s first true sound film is silent. The Great Dictator (1940), the filmmaker’s (in)famous takedown of Adolf Hitler at the height of America’s non-interventionist stance on World War II, opens with a disclaimer that merrily gives away its plot: “Any resemblance between Hynkel the dictator and the Jewish barber is purely coincidental.” This, of course, is the entire point of the film, which most directly skewers Hitler’s anti-Semitism by pointing out the self-loathing in it, and which above all illuminates the artificial divisions erected by the hateful in fostering hostility and genocide.

As significant an aesthetic and rhetorical departure for Chaplin as the film is, this angle is not so far removed from his longstanding political engagement. The Tramp permitted the filmmaker to approach similar subject matter along class lines, where his iconic protagonist represented an underclass all too happily marginalized by mass industrialization and the national image of post-WWI prosperity, especially in Modern Times (1936). The Great Dictator picks up where Modern Times ended when Hitler avatar Hynkel (Chaplin) is told of a union strike by Garbitsch (Billy Gilbert), his Hermann Göring. Hynkel demands all strikers be shot, but the velvet-voiced Garbitsch softly demurs, noting that the workers are too skilled to be lost on the eve of a military campaign. His solution? Put everyone back to work, have them train more workers to do their jobs, then shoot the strikers.

That scene bridges Chaplin’s past and present preoccupations, but much of the film is a recapitulation and modification of the Tramp to fit a radically altered context. The Tramp had been a soldier before, in the great short Shoulder Arms! (1918), but we meet Chaplin’s unnamed Jewish barber as a “Tomainian” conscript enduring a far more hellacious tour than his American counterpart, forced to investigate defective bombs and drawn into battles in which he has no emotional stake. (One of the film’s early comic and metaphorical highlights comes when the barber marches with his comrades into a thick fog and ends up drifting away and joining a column of equally weary British soldiers, both sides oblivious to any difference between each other.) 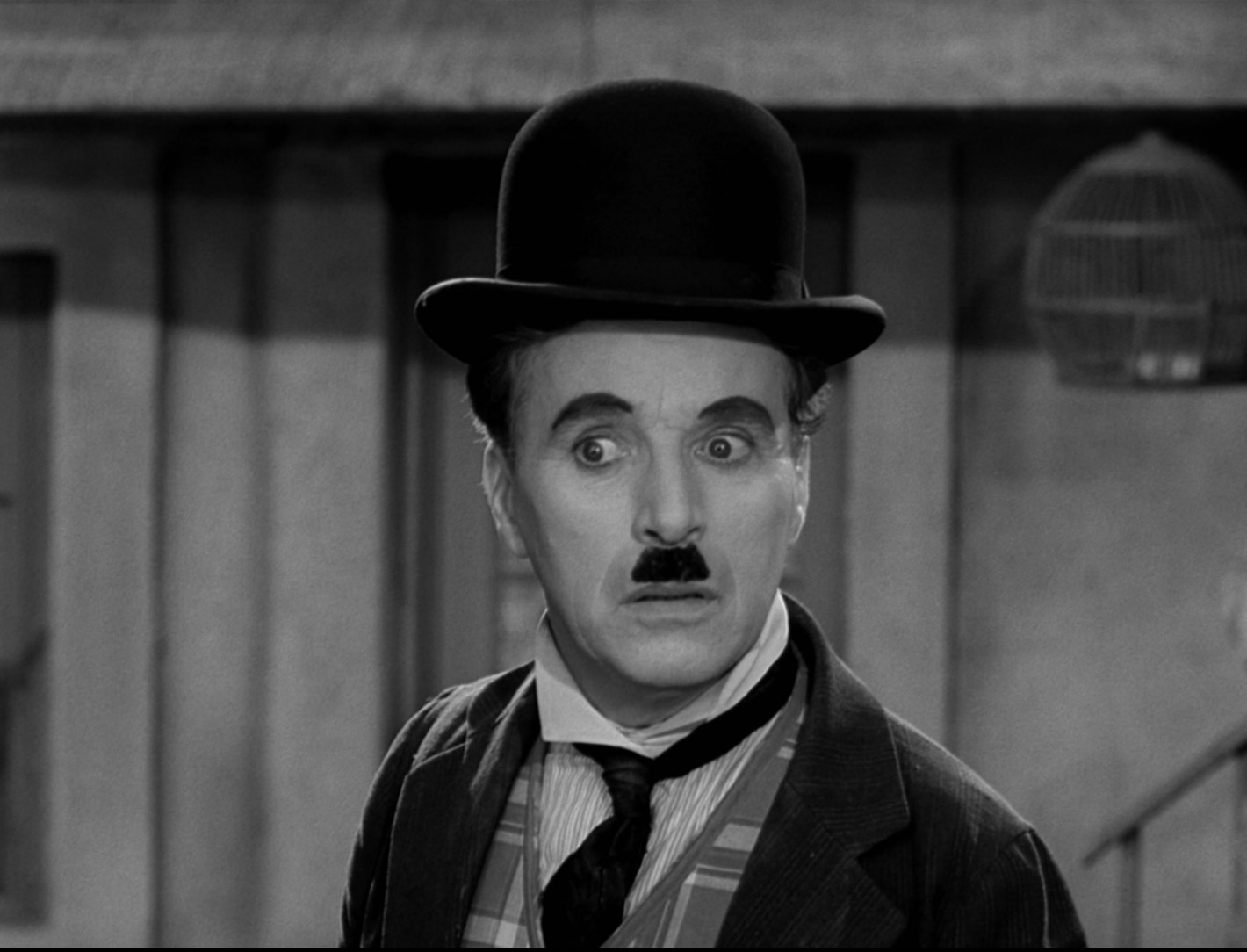 Elsewhere, the Tramp’s entire social position is inverted. During a down period in which Hynkel eases his persecution of Jews—in the film’s most cynical joke, to appease a foreign lender to finance his military invasions—the barber and his girlfriend Hannah (Paulette Goddard) relax a bit. They go out on a date after the man puts on a version of the Tramp’s classic get-up, complete with bamboo cane and bowler hat, but in the context of the harassed and vandalized Jewish ghetto, the “Tramp” now looks like a distinguished, dignified gentleman more put together than anyone around him. It’s a moment of simultaneous beauty and heartbreak that is enhanced by an audience’s taken-for-granted familiarity with Chaplin’s greatest character.

The film has its share of blunt political appeals—like a beatified Goddard wistfully turning her head upward and imagining a world where she wasn’t hated for her identity—but the subtlety and grace of that scene of the barber as Tramp typifies the picture’s true comic tenor. Chaplin’s blocky compositions betray his silent-era apprenticeships, but they also set up a number of eloquent, unforced juxtapositions, especially when it comes to the movie’s surprising amount of dance scenes. When the barber gets into an altercation with some storm troopers and Hannah joins in, she accidentally smacks Chaplin on the head with a frying pan, sending him on a punch-drunk twirl down a street where the charmingly surefooted stumbling of the man is backgrounded by raided shops and “JEW” slathered onto windows.

Chaplin’s capacity to mix horror, comedy and beauty comes to a head in the scene where Hynkel engages in a pas de deux with a balloon globe, momentarily living out his fantasy of total domination as he twirls the ball on his fingertips, rolls it along his shoulders and bounces it into the air. It’s a serene moment shot through with discomfort, especially when Hynkel lets out a mad giggle as he holds the world in his hands. Perhaps the eeriest aspect of all is that this marks the only moment of the film in which Hynkel finds any comfort and relaxation with himself; Chaplin, master of body language, naturally exaggerates Hitler’s public gestures throughout, and he regularly sends the dictator into coughing fits when he gets too animated. 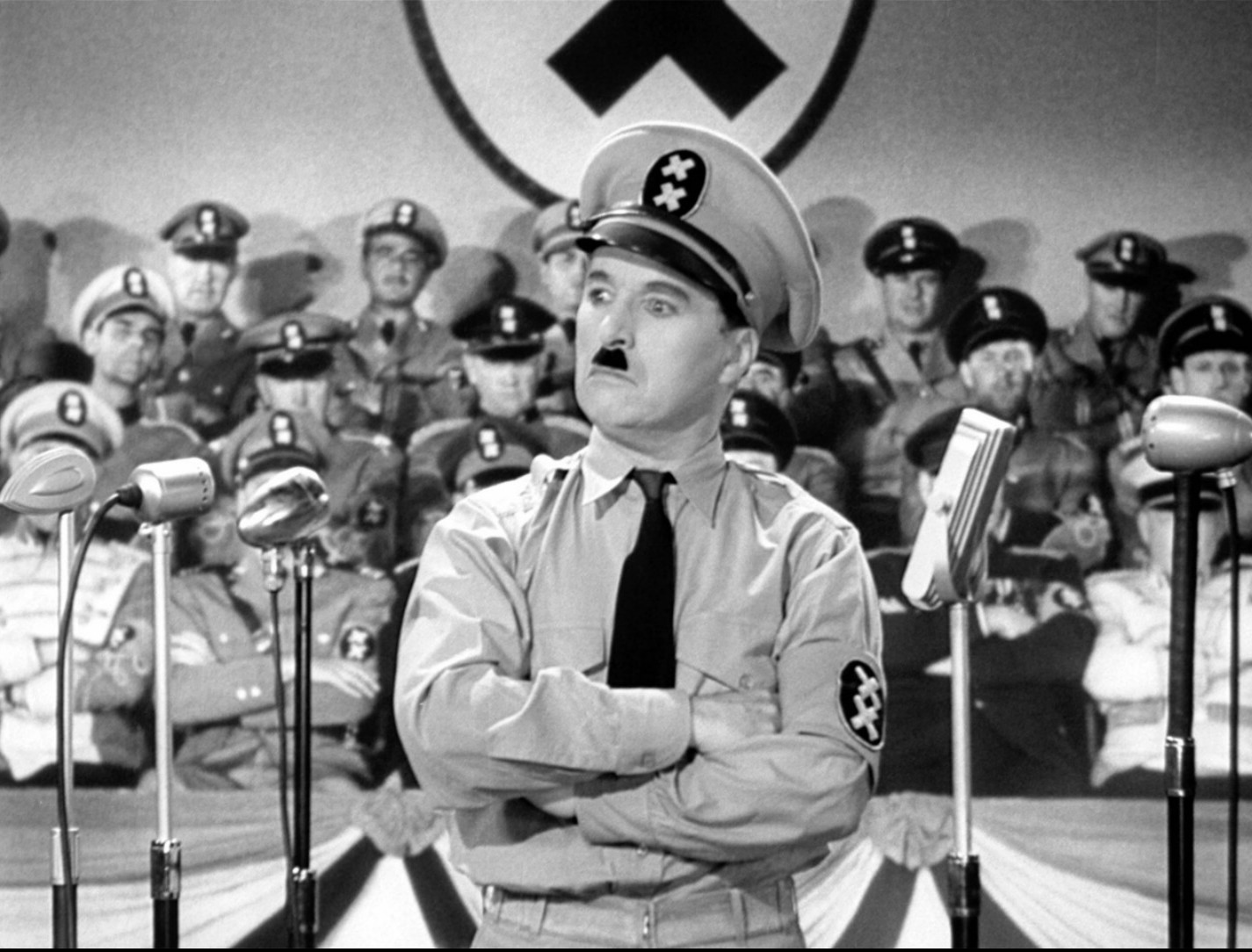 But Chaplin also understands the power and effect behind Hitler’s poses, the tension generated by his jerking motions and the release offered by his sudden, full-body lurches. Hynkel is a man who foists his own insecurity and self-loathing onto a citizenry, then makes them feel as if he has bettered them by taking it back again. It’s a vaudeville performance, but aimed back at the performer, and one gets the sense that Chaplin zeroes in on what makes Hitler so evil by pinpointing what made him fail as an artist: He cared only for himself, never the audience.

Today, The Great Dictator mainly fosters discussion for its finale, in which the barber poses as Hynkel, then becomes, effectively, Chaplin himself to deliver a stirring speech in favor of democracy and international brotherhood. The scene now exists as one of the key texts in any debate on the merits of propaganda, or politics in general, in entertainment, and the extent to which political rhetoric compromises aesthetics. But much of this debate focuses on the scene solely as an anti-Hitler screed, with Chaplin getting out ahead of his peers and calling for the United States to support Europe against the Axis. His speech obviously centers on this, but it also broadens to take not-so-subtle swipes at America’s own state of racial strife. It is in that indictment of the U.S. that the film makes its most decisive split with Chaplin’s prior filmography. The silent Tramp satirized American society but nonetheless made audiences feel good about themselves. By contrast, The Great Dictator used sound to more explicitly call out the failings of his adopted country, something he would only develop further with the pitch-black postwar satire Monsieur Verdoux and the exiled, anti-1950s broadside of A King in New York.