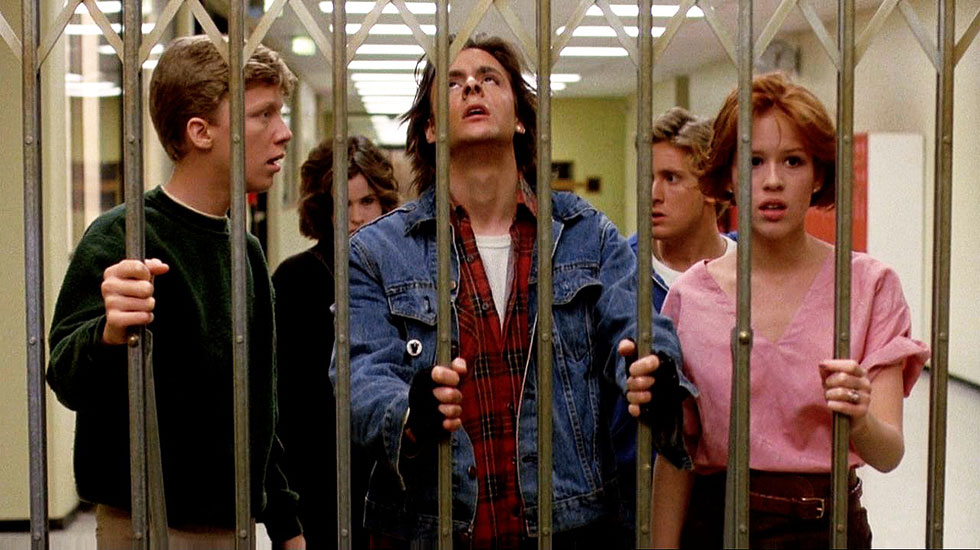 The jock. The princess. The nerd. The rebel. The loner.

Brought together by circumstance, in detention for a full Saturday in Chicago, these five high schoolers are not strangers, but they do represent wholly different worlds. They come from different places in high school’s intense social structure, and are therefore, on the surface, incompatible. What could they possibly have in common? Virtually everyone can attest to high school’s strict reliance on group affiliation in order to get by. As the day goes by, the characters’ initial wariness gives way to an open forum, where their deepest secrets are revealed. None have particularly great relationships with their parents, and all have some kind of shame hidden from the social stratosphere, whether it’s an attempted suicide or the pressure of virginity. Suddenly, their differences fade.

All our lives, we compartmentalize. It’s easier and it’s quick. This behaviour is learned before high school, but this is where it crystallizes. Navigating the particulars of the adolescent social structure is difficult for everybody, so to define a person in an instant becomes shorthand that persists long after the hormonal years in which we hone that ability. John Hughes’ The Breakfast Club, perhaps his most iconic achievement, takes on this period of self-development and gives it the after-school-special treatment, teaching everyone a valuable lesson about identity politics. All five realize that despite their differences, they have far more in common than they ever would have thought. Big hug and let’s all go home.

It’s as easy to make light of the facile nature of the film’s message as it is to assign people roles, whether thirty years ago or today, but both acts limit the opportunities to appreciate what makes the film, and people, special. We know how much importance teenagers place on being accepted and included, and the stereotypes Hughes utilizes are familiar ones that we can all recall—everyone can find something to identify with in at least one of the characters. To see them reach a certain understanding is instructive, but also relatively cathartic. Crossing dividing lines of gender, social status and class (though, notably, not race), their stereotypes are rendered meaningless by the end of the film, as they always were.

And yet, that isn’t quite right, either. These five kids would never speak to each other like this under any other circumstance. And, it is implied, they will go back to their normal lives afterwards, likely without acknowledging what happened on that Saturday. They’ve learned something about the dynamics of high-school sociology, but for what end? Is that knowledge valuable if it all continues, business as usual, perhaps with a knowing nod in the hallway at school? Luckily, this is for us to spend time pondering, not the film. It is the responsibility of the film to establish differences and gradually erase them. Claire (Molly Ringwald) takes out her lunch, expensive-looking sushi, thus indicating her socioeconomic status. Bender (Judd Nelson), meanwhile, lacks a lunch altogether. Some can’t afford to bring their own lunch, and the lines between them are explicitly and plainly drawn.

There are times in life when you make a strong connection with someone, but only for a few hours, and then they leave your life forever. You strike up a conversation with the guy next to you on a plane, or the girl in the waiting room. I think this is where part of The Breakfast Club’s power comes from. Those conversations can stay with you long after they take place, the particular kind of interaction that happens in these situations allowing for a certain kind of bizarre intimacy, or rather, communion. The danger of revealing yourself in front of a stranger takes away some of the vulnerability that you would normally feel, giving the possibility for a unique type of connection. The kids in The Breakfast Club experience this phenomenon on a larger, closer scale—they will, after all, continue going to the same school on Monday. But just as in those similar situations, the value of the shared experience extends beyond those social realities, because there’s something strongly tangible to be said for those understandings reached between different people. Those are rare, and they’re lasting.

The Breakfast Club is not invincible, however. Its insistence on ignoring race feels like a detriment to its message about accepting differences. Hughes’ perennially whitewashed America is consistent here, and it could have seemed like more than the movie could handle at the time, but even by making one of the characters a person of colour, the message would have been that much more nuanced and effective. There are failures of gender, as well. Allison, the loner, is ignored until Claire, the princess, puts some makeup on her. This is the classic trope of the makeover entirely changing the social perception of an otherwise-herself girl, and it’s disappointing in a movie that insists your differences are unimportant and worth embracing.

“We’re all pretty bizarre. Some of us are just better at hiding it, that’s all.” Andrew, the jock, says these words, and they could be considered the film’s thesis/critique of social norms and their hierarchical perpetuation. The Breakfast Club is about reaching common ground, and though this means to some degree that their identities are defined not by their individual qualities but only by those they share, it’s such a simple, powerful message. They find themselves in each other. Though the film doesn’t significantly bring self-acceptance into this message, Hughes is right in exploring another kind of emotional maturity: accepting others is where real compassion begins.