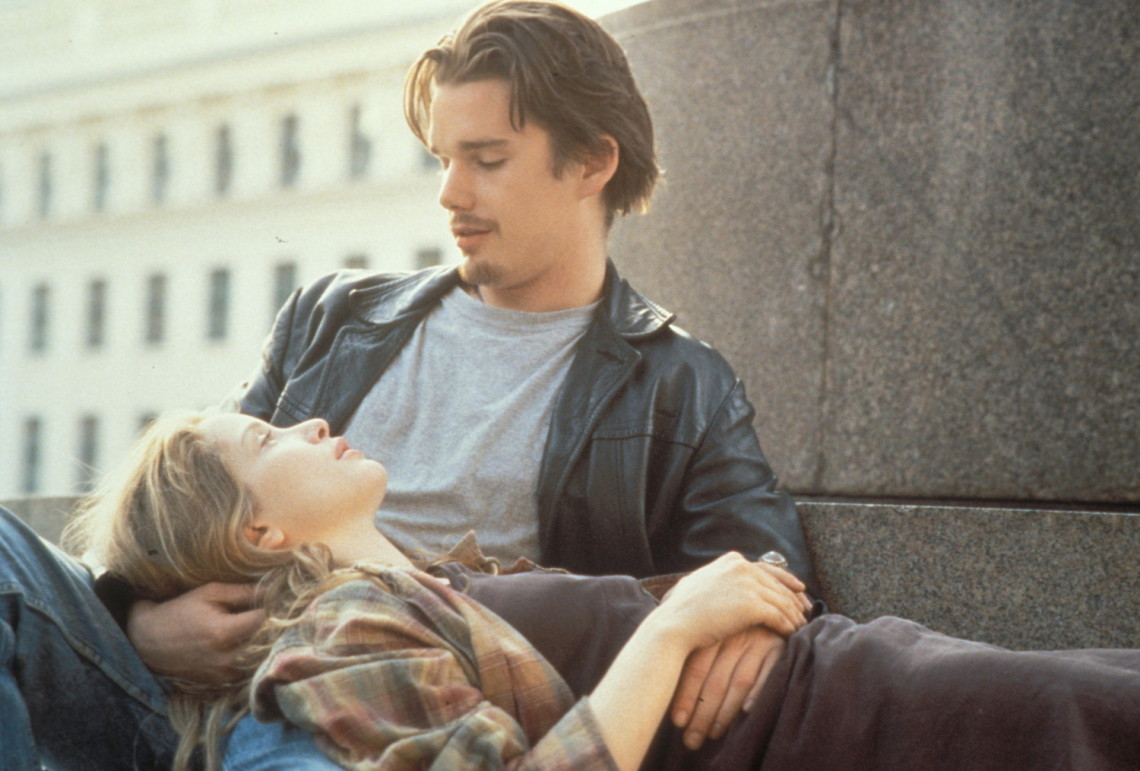 Time After TIme: Looking Back at “Before Sunrise”

When Peter Bogdanovich interviewed Jimmy Stewart, Stewart told a story about a random guy who once told him, “You did this thing in a movie where you read a poem once … That was good.” Stewart realized that the guy was talking about a movie that came out in 1941, over 20 years before. Stewart said to Bogdanovich:

“And that’s the thing—that’s the great thing about the movies … After you learn—and if you’re good and Gawd helps ya and you’re lucky enough to have a personality to comes across—then what you’re doing is you’re giving people little… little, tiny pieces of time that they never forget.”

Among the many topics that interest director Richard Linklater, time is his main obsession. You can see it in the trilogy of Before Sunrise, Before Sunset and Before Midnight, filmed over a 20-year period, and you can see it most explicitly in his latest, Boyhood, filmed over the course of 12 years. The passage of time is one thing that every human being has in common, and with it comes mortality, change, loss. Other filmmakers have been obsessed with time, and have struggled to put it onscreen, to capture the un-capturable.

In Shakespeare’s Midsummer Night’s Dream, Quince boils down his theatre troupe’s main challenge in creating the play-within-the-play: bringing “the moonlight into a chamber.” Bringing moonlight into a chamber is the essential “hard thing” of theatre, movies, art, anything involving make-believe, and Linklater cares deeply about figuring out truthful ways to create a space where “moonlight”—love, listening, the ebb and flow of conversation, the passage of time—can be captured. 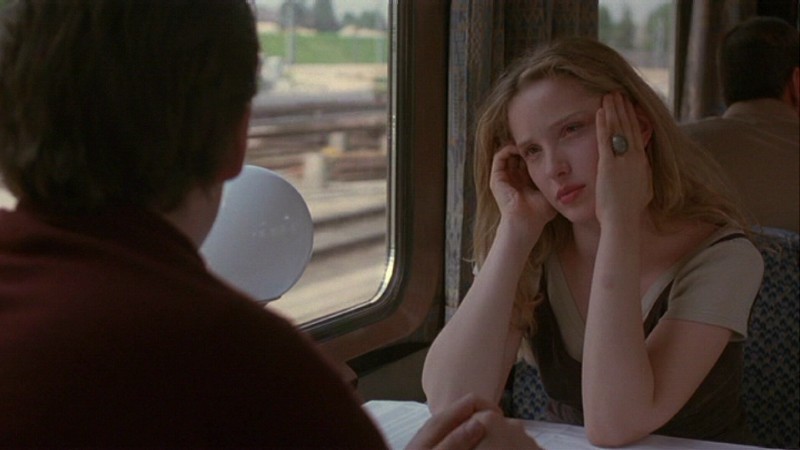 The potential for a decades-long series of films is there in Before Sunrise. The film starts simply with whizzing images of train tracks, and a landscape moving by, presumably out the train windows, and yet Linklater chose to underscore it with the sweeping overture to English Baroque-era composer Henry Purcell’s Dido and Aeneasbig, momentous even, the music invested in thrusting these two strangers into one another’s paths.

Before Sunrise takes place over the course of one 24-hour period, with a clear end-time stated in the title. Will Celine, a French girl (Julie Delpy), and Jessie, an American boy (Ethan Hawke), connect? Will they kiss? Will they get back on the train together? Linklater is interested in something subtler than “what happens;” he is interested in the thing that we all know from real life but that is so rarely seen onscreen: what it feels like to have an enjoyable conversation. Kissing is great, but talking is better. Celine and Jessie playfully commit to the art of conversation, doing a QA game on a tram (one of the many long takes that make up the film), or making pretend phone calls to their friends back home. Even with the seriousness of some of the topics they discuss, and even as it becomes clear that sex is probably going to happen, the tone remains light and engaged, as opposed to guarded or cynical. Even when they disagree, Celine and Jessie seem more invested in keeping the conversation going rather than insisting on being right.

Roger Ebert stated in his original review of Before Sunrise that Linklater was “onto something.” Linklater’s pieces-of-time experiments with moonlight-into-chambers contain a cohesion that remains thrilling to his fans. Linklater continued to be “onto something” 10 years later. Ebert described of Before Sunset: “The film has the materials for a lifetime project; like the 7-Up series, this is a conversation that could be returned to every 10 years or so, as Celine and Jesse grow older.” And indeed that has come to pass with the release of Before Midnight in 2014. 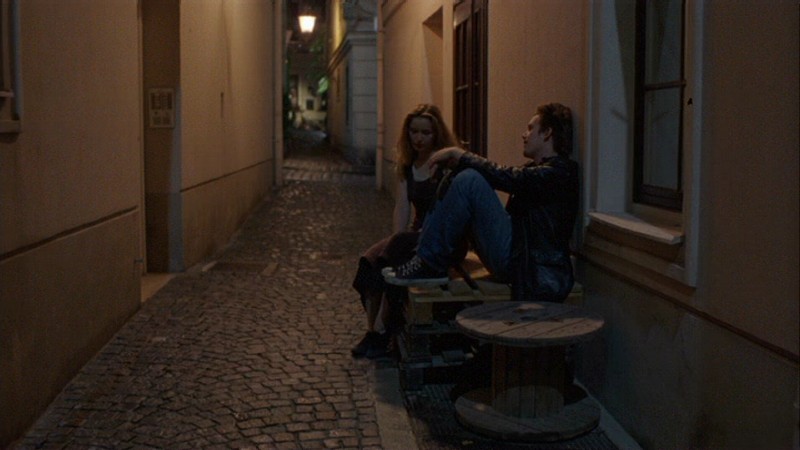 Taken all together, the films are a mighty accomplishment. The charm of the original was not betrayed in the follow-ups, although the exploration changed, the world opened up to include others, the conversation subjects got scarier and more personal. You feel the characters move from youth to middle age. Things are gained with age, that’s for sure, confidence, ease, but things are also lost. The sense of loss is palpable in Before Midnight, as their younger selves practically dance across the screen in mockery of their current tensions and stresses. “Would you get off the train with me as I am now?” Celine asks Jessie in Before Midnight.

Life is made up of small moments, not big ones, and Linklater has a tremendous sense for the importance of the small. At the end of Thornton Wilder’s Our Town, Emily, after “going back” to the land of the living for just one more day, says good-bye, and what she says good-bye to speaks of the things she will miss:

Good-bye, Good-bye world. Good-bye, Grover’s Corners … Mama and Papa. Good-bye to clocks ticking … and Mama’s sunflowers. And food and coffee. And new ironed dresses and hot baths … and sleeping and waking up. Oh, earth, you are too wonderful for anybody to realize you. Do any human beings ever realize life while they live it—every, every minute?

Before Sunrise, with its attention to detail, pinball machines and palm readers, belly dancers and books, ferris wheels and graveyards, knows that it is the small things that make up the texture of our lives. When one looks back on a relationship, it is not usually the “plot” of it that remains. It is the small sensory things, how the person smelled, how the person’s eyes crinkled up when laughing, the way the light was that night of the first kiss. The tangible intangibles. Before Sunrise gets that right on a cellular level only through its devotion to details, to behavior, to the simple act of listening and talking, to the silences that open up when things start to get serious. 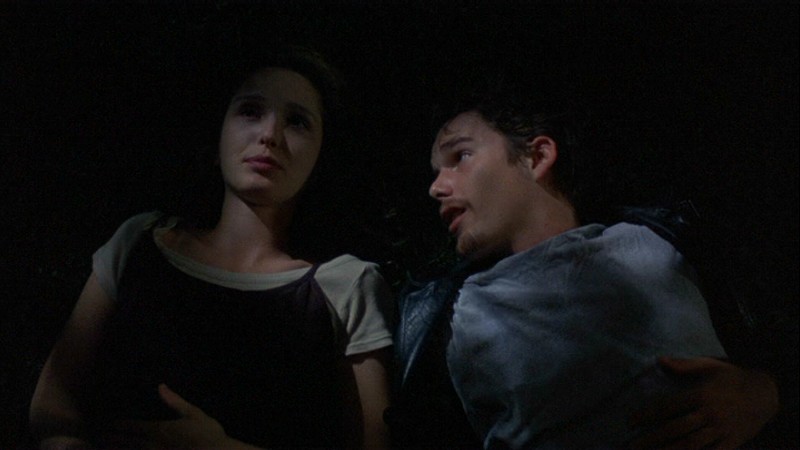 “Only connect! That was the whole of her sermon. Only connect the prose and the passion, and both will be exalted, and human love will be seen at its height. Live in fragments no longer. Only connect, and the beast and the monk, robbed of the isolation that is life to either, will die.”

Celine and Jessie, young adults reaching towards their own lives, asserting their own hard-won personalities and opinions, while still remaining open to the possibilities in the moment, discover the truth of Forster’s words. The film stands on its own, in this way. If Before Sunset and Before Midnight hadn’t been made, Before Sunrise would still hold a special place in people’s hearts because it tells a story of two random people who were able to “only connect.”

In the middle of a conversation about religion, Celine says, “I believe if there’s any kind of God it wouldn’t be in any of us, not you or me, but just this little space in between. If there’s any kind of magic in this world it must be in the attempt of understanding someone sharing something. I know, it’s almost impossible to succeed but who cares really? The answer must be in the attempt.” Like Linklater as director, she is a creator of her own reality, as is Jessie, as are all of us. Between us there is a space. How do we cross that gap? How do I understand what it is like for you, how do I explain what it is like for me? As Celine observes, it is the attempt that matters, ultimately, the understanding that moonlight cannot actually be captured, but that one must at least try. Moonlight, magic, God, love … Whatever you call it, it is there in “this little space” between us. And so that’s why even if Before Sunset and Before Midnight had never arrived, Before Sunrise feels so significant, worthy of that momentous urgent score in the opening scene.

There’s a reason many of the references in this essay are literary. A topic such as time is usually better handled in written prose, where pages and pages can be devoted to one thought experienced by one person when he hears a certain song, memories launched into view by the taste of a pastry that reminds him of childhood. In the closing scene of Before Sunrise, Jessie drops Celine off at the train to Paris. The “little space” between them now reverberates with connections, and they decide to meet six months from that day, at the same place. It is during this conversation that we learn that the entirety of Before Sunrise has taken place on June 16. 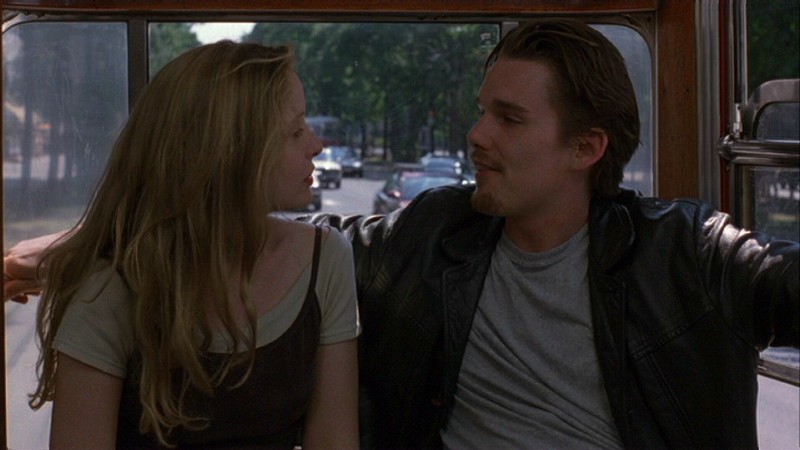 June 16 is known the world over as “Bloomsday,” although one might need to be a James Joyce obsessive to really understand what that means. In June 1904, the young James Joyce, overrun by feelings of unwanted identification with religion, family, and state, had a chance encounter on the streets of Dublin with a woman named Nora Barnacle. Joyce, always attuned to the literary, loved the pun in her last name, and also loved that her first name was reminiscent of the famous lead character in a play by his hero, Henrik Ibsen. The two set up a time to meet, and Nora, perhaps understanding that her life was about to change, blew “Jim” off. She was a total no-show. On June 15, 1904, Joyce wrote her a pleading note, saying, “I may be blind. I looked for a long time at a head of reddish-brown hair and decided it was not yours. I went home quite dejected. I would like to make an appointment but it might not suit you. I hope you will be kind enough to make one with me—if you have not forgotten me!”

Joyce and Nora went for a walk on June 16, 1904. Three months later, the two fled to Europe, unmarried, leaving a wake of debt and scandal behind them. The two would not get officially hitched until 1930, but they lived as man and wife for decades, having two children and being virtually inseparable.

Nora was Joyce’s entry into an integrated life, a full life, a life lived freely, where he could be his own man, where he was no longer separated from himself. His tribute to Nora was Ulysses, published in 1922 to much acclaim and tremendous controversy. Ulysses is almost 700 pages long and takes place on a single day, June 16, 1904. It was the day that, for Joyce, symbolized the moment when he stopped living “in fragments,” when he was able, finally, to “only connect.”

Linklater’s use of Ulysses’ date, then, is not just a gimmick, or a clever wink to audience members who will get the reference and feel smart. It was an announcement of Linklater’s intentions, it was a statement of what Before Sunrisewas really about.

We cannot find salvation by ourselves, and we cannot find it in another person. Before Sunrise shows, in every pause, in every kiss, in every argument, in every laughing, bantering conversation, that it is in “the little space” between us where salvation is a remote possibility.

5 thoughts on “Time After TIme: Looking Back at “Before Sunrise””