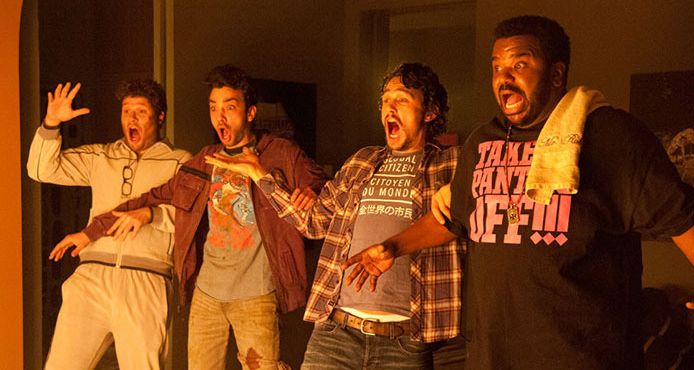 ‘This Is The End’

To much surprise, Seth Rogen and Evan Goldberg’s directorial debut – the latter guilty of penning last year’s most abhorrent comedic war crime The Watch – is a surprisingly fresh, funny, and daring comedic excursion with more on its mind that vulgarity (though there is an abundance of that too). In fact, it’s unlikely that any other comedy slated to be released in 2013 will produce laughter and insight with as much frequency and wit as This Is the End.

The beginning of the end starts when Jay Baruchel (playing “himself”) and Seth Rogen (also playing “himself”) attend a wild party at James Franco’s sleek new mansion. Fellow celebrities, from a coked-out Michael Cera to a gracious Emma Watson are in attendance. (Note: By this point you can probably tell, or already know that celebrities will be playing variations of themselves on screen.)

However, the good vibrations fueled by alcohol and marijuana come to a screeching halt when the ground begins to shake. Guests of the soiree frantically jet outside of the house only to find the Hollywood hills engulfed in flames. Panic abound, many comedy stars – from Paul Rudd to Aziz Ansari – fall into a bottomless pit never to be seen again. After ten minutes of chaos all who’s remaining is Jonah Hill, Craig Robinson, Rogen, Baruchel and Franco.

Franco’s tasteful bachelor pad serves as the bunker for these five “friends” who must now work together if they are to survive the apocalypse.

Through portraying caricatured versions of themselves and their friends, Goldberg and Rogen give a glimpse into the comedic personalities we’ve grown to know and love throughout the years. In particular, Hill’s faux-angelic personality and Franco’s pseudo-love for art (which may or may not be accurate depiction of reality) spice up the movie and our preconceived expectations as to what these famous actors may be like.

This Is the End is more than just an excuse for Rogen and company to get together and make a movie though. It’s a film with depth that astutely reflects on the bizarre business each performer – from Franco to Hill to Baruchel – has thrived in throughout their careers. They collectively mock how Hollywood pays actors and actresses an inordinate amount of money for a seemingly easy job.

Aside from occasionally ragging on the business employing them, Rogen and Goldberg write a script laced with Christian overtones. The film takes place during Armageddon with Judgment Day just over the horizon. In preparation for that eternal judgment between good and evil they attempt to absolve themselves of all wrongdoings – making amends, acting with unconditional kindness, and ultimately sacrificing themselves for each other.

Although theological and social commentary is embedded into the roots of This Is the End, this film’s chief goal is to make people laugh. And laugh we do. The crude and rude zaniness of Pineapple Express and Superbad are still intact here – and so is the pervading power of friendship, which acts as the nucleus for all three of the aforementioned movies.

Thankfully for us, This Is the End rejuvenates a genre that has been mostly lifeless over the past five years. Rogen and Goldberg’s triumphant debut is a harmonious confluence of searing satire and uproarious comedy bound to delight its intended audience and then some.