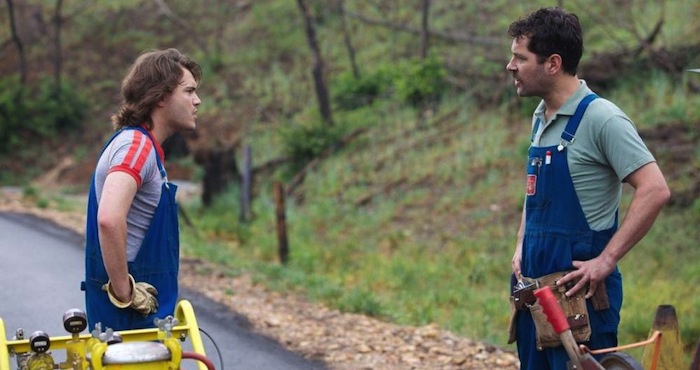 Many cinema fans have wondered what happened to the David Gordon Green they knew and loved ever since the indie darling went Hollywood. It turns out he’s still around, that more sensitive soul buried under the purveyor of weed jokes and Danny McBride. Prince Avalanche is a return to the familiar for the writer/director, if not quite a return to form.

Paul Rudd and Emile Hirsch are on their own, a two-man show reminiscent of existential theater that I’d be able to name-drop if I knew more about theater. Rudd is Alvin, a mustachioed, self-serious man spending his summer repainting traffic lines on a remote Texas road that’s been devastated by a recent wildfire. Accompanying him is his girlfriend’s brother, Lance (Hirsch), whose layabout attitude grates against Alvin’s sedulousness. The duo bicker their way through the charred forest, slowly growing on each other in spite of themselves. Despite their polar personalities, they’re akin in their romantic frustrations, which are played out via offscreen events.

Prince Avalanche is less like the movies that made Green’s name like George Washington and All the Real Girls and more in line with the conventions of contemporary indie (or faux-indie, more accurately) cinema. There’s less of a focus on Malick-esque fetishization of the magic hour and contemplative soliloquies, and more aimless, seriocomic back-and-forths between the characters. Sometimes it manages to hit that sweet spot of inexplicable hilarity – the biggest laugh is the “there are birds in the car” moment from the trailer – but sometimes it just falls flat.

Rudd and Hirsch have an effective anti-chemistry that slowly transmutes into mutual understanding. Rudd, who generally plays your ideal boyfriend, is going against that grain here. Alvin is all masculine posturing that conceals a deep insecurity, a half-confident bicep flex in human form. He’s trying to edify himself on the road, learning German and composing purple prose love letters to his girlfriend. He wants to teach Lance how to be a man, but doesn’t really know much on that subject himself. Lance, in contrast, is Hirsch seemingly doing a Jack Black impersonation. Little fazes him out of his perpetual slack, and Hirsch balances his irritability and likability rather well.

Occasionally, the film hits something great. The best sequence has Alvin, alone on the road during a weekend, indulging his more relaxed inclinations. The gorgeously barren treescape comes into full, loving detail here. Eventually, though, he stumbles across a woman rooting through the ashen remains of her house, and stops to talk to her. It’s a remarkably simple and effective moment, as he listens to her talk about what she’s lost, and he then goes through a pantomime of normal activities through what were once intact rooms and hallways. It really drives home the purgatorial nature of the film. Alvin and Lance are living in an in-between moment of their lives, just as the woods are just beginning to regrow.

The movie remains agreeable throughout, save a few points where Alvin and Lance’s talk about women gets a bit too bro-y and bitter for my taste. Prince Avalanche is an eminently amicable piece of work, a light but engaging look at, as Alvin puts it, the difference between loneliness and being alone.