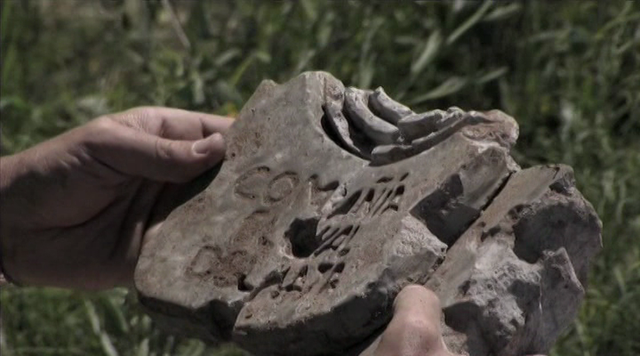 Extraordinary Stories begins with an ordinary sight, of a man walking in medium-close-up down a dirt road in an extended shot. An off-screen narrator stresses the unremarkable banality of this man (played by director Mariano Llinás), whom he names only X amid various dismissals of unimportance. When X witnesses a murder out in a hay field, however, then gets involved in the matter in a surprising way, X’s story becomes extraordinary indeed, and Llinás still has four hours to go.

X’s arc is one of three, the other two are devoted to distinctive characters similarly reduced to letter designations. Z (Walter Jakob) arrives in a small town to take over as manager of an office so rustic and obsolete that a plant growing in a cramped corner looks as if it grows out of the filing cabinets themselves, the earth reclaiming this regional workplace as its own. Meanwhile, civic engineer H (cinematographer Agustín Mendilaharzu) gets recruited by a higher-up to search for evidence out on the river for a project that will help him win an impetuous bet with a colleague.

Like X’s sudden lurch into narrative movement, H and Z are soon set on their own adventures: Z discovers his predecessor’s cryptic treasure map and sets out to track down its clues, while H reluctantly finds himself drawn into a convoluted conspiracy. Llinás sets up X’s detective story (he attempts to scrutinize a dossier he took off the deceased), Z’s adventure tale and H’s corporate thriller in short order, though the moods of each separate narrative begin to blur as X begins to concoct wilder and wilder theories, H’s trek turns into a downstream adventure of its own.

As the film settles into its great length, its unifying DV and voiceover narration gradually allows for a great variety of methods and tones. The ping-pong movement between plots with each chapter (and occasionally within the same ones) is matched by an inventive, always shifting aesthetic. Docudrama handheld close-ups (Z’s office is shot much in the same way The Office is) are juxtaposed with master shots worthy of old silents (such as the extreme-long-shot of the early murder framed so symmetrically that the murderer anticipates his disruptive action by throwing off the mirrored frame). Scanning shots of newspapers turn essayistic as X’s lookout for news turns into mad, cabin-fever theorizing that aestheticizes the conspiracy theorist’s mindset as facts begin to collide and break off into conjecture.

This is most apparent in a sequence in which X reads up on a missing woman, Lola Gallo, about whom he speculates until she, too, is folded into his conspiracy web. A vivid montage set to the narrator’s breathless recounting of X’s mind toiling concludes with him informing the audience how utterly, spectacularly wrong X’s theories are, before the unnamed presence hands off the baton to Lola herself to explain the truth in a lengthy diversion that adds romance to the styles in the film’s melting pot.

The effect is not dissimilar to the conclusion of Ulysses, which seemingly ends the chapter before with a cosmic fulfillment of its drifting plot before Molly enters and blows the male perspective to smithereens. Lola’s story, so much more banal than the one X invents for her, is nevertheless a touching diversion, a romantic triangle that plays out in summary but ends with a self-discovery that subverts the expected conflict resolution. X can only think about Lola a certain way, but upends the generic conventions erected around her story to live a fuller life.

Her story sets the final push of the film in motion in that it reveals the unifying principle under all the disparate narratives, asides and misdirections is the simple urge to connect. Z quests for treasure, but he finds a greater satisfaction in finally interacting with his coworkers and discovering that, contrary to his occupation as an ambulatory signature, he is social and likable. H, stuck with a blathering guide he cannot stand, must still work together with the man to get anything done. Even X, whose fevered Lola Gallo invention reveals an inability to connect with those outside his myopic understanding, inadvertently puts his paranoia to good use when it helps save a life.

All stories, no matter how epic, need a basic impulse to drive them, and Extraordinary Stories mixes the most dynamic possibilities of both literature and cinema to show that the most fundamental goal of any tale is simply to communicate with someone else.

Vyer Films (www.vyerfilms.com) is a new pay-to-stream service that believes great films matter. They bring the best films from around the world, as determined by festivals, critics, and our board of curators, previously undistributed in the U.S. directly to the viewers that want them: audiences looking for something new, unique, and unlike anything available at the local theater. Packaging each rental with exclusive interviews, essays, and more, Vyer Films helps spur the kind of discussions we all want to have after seeing a great film, the ones that go on much longer than the film itself. With compelling films, thought-provoking features, and the convenience of streaming, Vyer Films doesn’t want you to spend your time looking for something good to watch, they want to help you see something new.