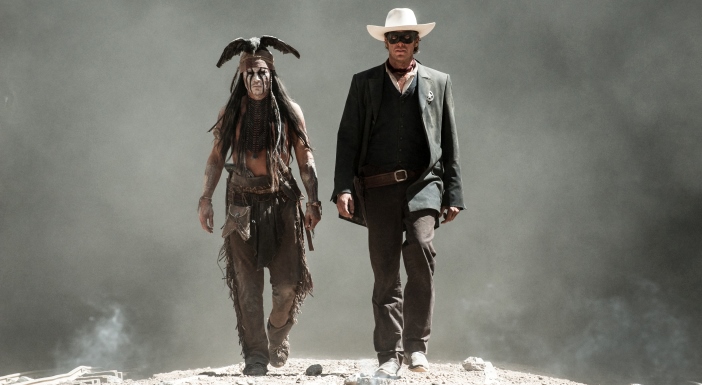 ‘The Lone Ranger’ Is A Repulsive Racist Mess

The opening scene of The Lone Ranger takes place in San Francisco in 1933, as a young boy wanders the hallways of a Wild West diorama at a local carnival. He passes two taxidermy beasts, a buffalo and a grizzly bear, and then encounters what may be the most terrifying exhibit of all: an elderly Native American, arms raised in a fearsome battle pose. But this is not a formaldehyde-coated animal, no matter what the placard reading “The Noble Savage” might suggest. This is a man. And spying the boy’s small black mask, he proceeds to tell him the story of the Lone Ranger. Cue movie.

This framing device is completely unnecessary and adds nothing to the overall narrative of the film, but it hints at what could have been. There’s a masterpiece lurking on the edges of The Lone Ranger, a tragic Western epic about dehumanization, oppression, cultural memory and the unspeakable evils that were committed in the name of progress. But that’s not the type of movie a major studio will spend over $200 million to produce, so what we’re left with is a tonal nightmare, a movie about how white men built America on the bodies of minorities that casts a white man as a Comanche for comic effect.

Armie Hammer stars as John Reid, a by-the-book Locke-fearing lawyer who returns to Texas in 1869 after being away for years in pursuit of his degree. He encounters the outlaw Butch Cavendish (played by the delightfully sinister William Fichtner) on the train ride home, along with a kooky Comanche named Tonto (Johnny Depp), and soon finds himself struggling to enact “justice” without resorting to violence. He’s deputized by his brother Dan, and they take a posse to bring Cavendish to justice, only to be slaughtered in an ambush that leaves John the sole survivor. He’s nursed back to health by Tonto–who insists that he’s now a near-invincible “spirit-walker”–and decides to wear a mask to keep people from realizing he’s still alive. Brought together by a mutual hatred of Cavendish, they embark on a way-too-long journey to stop him—though whether they should bring him in dead or alive remains up for debate.

For the first 30 minutes, The Lone Ranger isn’t half bad. It sets up several character arcs, establishes a potential love interest, opens with an impressive action scene involving a train robbery, and has a compelling lead in Armie Hammer (who, despite his poor choice of projects recently, really does deserve to be a star). It’s forgettable, but it’s light and fun summer fare. But around the time our hero first dons the mask and sets about capturing the bad guy, things start to go off the rails (sometimes literally).

He has strange dreams and visions of what might be the future, but this is never commented on. His relationship with Tonto doesn’t seem to be one of friendship, but there are times when they help each other anyway, even after one of them has wronged the other. Tonto’s relationship to his fellow Comanche is touched on but never fully explained. Is he an outcast or has he chosen to be a loner? Like many other elements that are fairly important to the characters and plot, it’s never clarified.

The movie clocks in at 149 minutes, which somehow feels both too long and not long enough. The second act is a dull and staid slog, giving us only as much insight into the characters and plot as is necessary to move things along, yet at times there seem to be large chunks of story missing. Characters suddenly switch locations between scenes with no explanation of how they got there, or miraculously have important knowledge that we’ve never seen them learn. By the time the final action set piece rolls around, it’s still unclear just what exactly the Lone Ranger is supposed to represent. Is he a Robin Hood of the West, taking down the greedy? Is he some sort of non-violent activist (he always disarms his opponents) or just a bad shot? Is he ideologically opposed to this side of American “progress”? Or at the end of the day is he just a dude in a mask who wants revenge?

Depp delivers a serviceable performance as the Lone Ranger’s right-hand man, but it’s one of the laziest characters of his career, consisting of little more than broken English and occasional weird gestures (he seems particularly concerned with feeding a dead bird he wears as a hat). The decision to cast a white actor as Tonto perfectly embodies the paradoxical messages coursing through the film. Perhaps it’s an intentional move by director Gore Verbinski to demonstrate how some of the dominant themes are still relevant today—Native American culture has become so marginalized that it’s difficult to find A-list actors of native descent or for studios to risk casting them. On the other hand, intentions aside, the use of redface is pretty offensive when combined with such unflattering stereotypes.

Like the AMC series Hell on Wheels, most of the action in The Lone Ranger is set around the ever-expanding system of railroads as wealthy white businessmen seek to conquer the West and any Native American tribes in the region along with it. The inevitability of eventual genocide simmers beneath the surface of every scene, but there’s little time to reflect on the weight of what’s at stake as the film jumps from sequence to sequence, often with little connecting tissue. There are two very different films competing for attention: one is a fun family-friendly adventure with slapstick humor and broad stereotypes—a Western buddy comedy—while the other is a grim wake-up call, a reminder that our history is not one of masked heroes and their native sidekicks but one of blood and bondage and war, all in the name of good old-fashioned capitalism.

These two narrative threads never mesh into a satisfying whole, and the result is a racist mess of a movie that somehow manages to make the destruction of an entire culture boring. Its priorities feel completely out of whack, often forsaking meaningful drama for the sake of an easy laugh. Whenever violence is shown, it’s often in the shadows, and always bloodless. It’s like Django Unchained without the horrific depiction of slave abuse, a movie that wants desperately to make us recognize our historical sins but never to make us feel too bad about them. Its intentions may be pure, but it can’t escape the limits of its PG-13 rating, and the result is a hypocritical look at history that preaches the love of money is the root of all evil while never doing anything that might hurt its opening weekend gross. If The Lone Ranger was a character in The Lone Ranger, it’d be the villain.