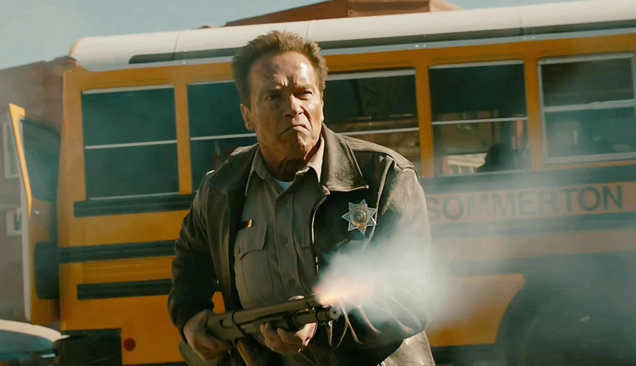 Christmas morning. Tiny puppies licking my face. A plate of crispy bacon. The embrace of a loved one. The last forty-five minutes of The Last Stand.

As I walked home from the theatre after watching Kim Ji-Woon’s first American production, The Last Stand, I noticed passersby staring at me. I looked into the reflection of a window to see what merited such attention. I saw that, unbeknownst to me, a gigantic smile was plastered across my face, causing me to look like someone under the influence or perhaps a Moneyball jackpot winner. I felt like one.

Because Arnold has returned. And we are the better for it.

While the marketplace has been flooded with entries into the “action thriller” genre in the last several years, the balance between intelligence and self-awareness is so rarely struck. Arnold’s pre-governance films weren’t exactly the jewels in his crown, but he is part of a dying breed: the real action star, mythologized by over thirty years of one-liners, explosions, and well-tanned brawn. The Expendables 2 wasn’t cinematic brilliance, but it served as a lovely Olympic match between the icons of an era swiftly vanishing behind the sands of time. Stallone and Willis can toss one-liners with the best of them, it’s true… but nobody ever matched Arnold, whose Austrian otherness coats him in earnestness yet never fully disguises the joy in his self-aware delivery. No one loves this genre more than Arnold: you feel it in every frame.

From the opening scene of The Last Stand, full of style and humor, to his first appearance, complete with shorts and slippers, Arnold’s self-deprecation is firmly present and Ji-Woon’s appreciative approach to the tropes of the genre prepare the audience for a wild ride. The ride starts in a rather predictable fashion: rote characters are introduced with basic backstories, a nefarious villain with an ego complex escapes, our hero has attempted to escape his frenetic past and holds little interest in continuing that lifestyle. Yet the beginning’s slow build feels biographical, giving the proceedings extra weight. An early speech about Arnold’s disdain for Los Angeles despite his accomplishments there make you wonder whether this is some veiled commentary about the action genre, currently under-appreciated unless laden with CGI effects and explosions. Is there a place for Arnold in today’s action world? Do we need him? For those that do need him, is he willing to put in the work when violence is maligned, critics are scornful, and the youth of America prefers comic-book superheroes to real ones?

Yet when his number is called, Arnold and his companions prepare bravely to prevent a villain from crossing through town. Once we arrive at the titular last stand, the movie goes absolutely bananas, full of blood, bullets, and bodies flying. Cars whiz around and crash at high speeds, one-liners are tossed at even higher speeds. While I admittedly felt anxious during the build for the last stand to arrive, I found myself surprisingly attached to the characters, under-developed as they were, by the time they are put in harm’s way, thanks to a sneakily smart script. The most off-putting part of the trailer, Johnny Knoxville, actually serves as the film’s awesomely double-edged political statement: liberals can rejoice that gun collectors are depicted as absolutely loons who should be locked up for the betterment of society… yet conservatives can rejoice that said loon actually helps save the day for the betterment of society. Each set of beliefs has its own fantasy fulfilled and its nose thumbed at the opposing faction. Beautiful!

This is an eventual Blu-Ray purchase that anyone like me will eagerly anticipate. There are, of course, those exhausting wet blankets out there in the critical world who fail to grasp the genius inherent within the action genre: its ability to subvert the expectations of mindless escapism with real intelligence, wit, and one-upsmanship. One-liners fail to tickle their funny bone, an inventively staged death or car chase simply inspires yawns, the presence of a hammy Peter Stormare villain simply elicits groans. If the idea of Arnold approaching the villain, gun drawn, and growling, “You give immigrants like us a bad name,” doesn’t make you giggle with delight, then simply avoid this film and others like it. For those currently delightfully giggling, rejoice! The final forty-five minutes alone will have you residing on Action Film Cloud Nine. Let’s pray to the cinematic gods that Arnold gets several more stands: I don’t want to lose the icons that make me feel these marvelous highs.

5 thoughts on “The Last Stand: Something Old, Something New”