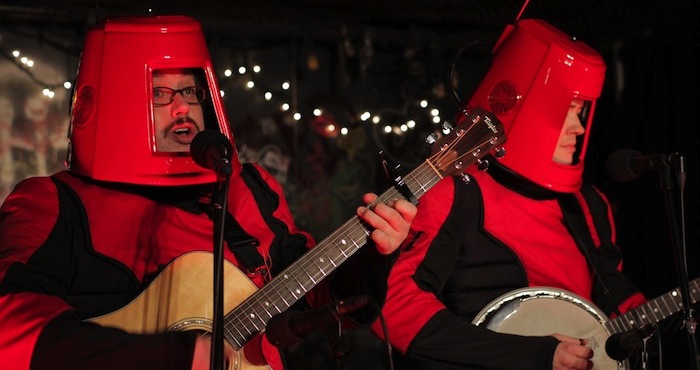 ‘The History of Future Folk’

The planet Hondo is threatened by an impending comet impact. General Trius (Nils d’Aulaire) came to Earth to kill humanity so that the Hondonians could have a new home. But he was entranced by an invention that Hondo doesn’t have: music. So he spared us and settled down to start a family, and now he plays banjo in a tiny bar. He’s joined by Kevin (Jay Klaitz), who was sent to kill Trius for failing to complete his mission, but who also fell in love with music. Kevin plays the guitar. Together, they are Future Folk, the world’s only alien bluegrass band.

Yes, this is legitimately the plot of a feature film. A tiny-budgeted story about two aliens who play folk music in between romance and trying to save both their home planet and Earth. Based on this synopsis, you may already know whether or not you wish to see it. But remember the words of the late Roger Ebert: it’s not what a movie is about, it’s how it’s about it.

The movie doesn’t take its silly setup too seriously, nor does it dip into cloying self-awareness, which saves it from being insufferable. It is not offensively cutesy, just blandly so. It would make a fantastic short film, but at 80 minutes, it feels needlessly elongated. In short format, the film would be closer in kind to the old pulp shorts or Twilight Zone episodes (which its plot easily could have been ripped from).

There’s a great conceit at the movie’s center: a love of music, and how purely it expresses emotion. There’s a fantastic scene in which Trius introduces Kevin to the art by blazing through a banjo medley of songs from all genres and periods. It’s electrifying and induces a sort of childlike glee, which Klaitz conveys with infectious verve as the sounds sink into him.

Klaitz runs away with the movie. Kevin is an inept schlub redeemed by his sense of wonder and enthusiasm. d’Aulaire, in contrast, is roadkill flat. He sings well enough, and has a few nice scenes with Trius’s young daughter. But he can’t do anything else with much conviction, whether it’s techbabbling science chatter or fight scenes. Fights which, by the way, include a deeply uncomfortable sequence in which a scrawny white dude effortlessly beats down a jail-full of aggressively ethnic criminals.

Although the part of the movie which truly takes the cake for unintended awkwardness is the romantic plot between Kevin and police officer Carmen (April Hernandez). Kevin falls in love with Carmen at first sight, and proceeds to stalk her for the rest of the movie. In one scene, he breaks into her house, paralyzes her with a stun gun, and then serenades her with his guitar. With a few minor adjustments in editing and score, it would easily play (and quite effectively) as part of a horror film. But somehow, instead of inducing massive trauma and paranoia, this makes Carmen fall for him in turn.

Still, that thread is more resonant than the one with Trius and his wife, Holly (Julie Emery), who split form him as a result of his unwillingness to tell her the full truth about himself. Their’s is a classic “just spit it out, morons” tale. The conflict would be resolved in minutes if he would just be honest with her. Alas, he is not.

The History of Future Folk has a pleasantly gentle tone. It makes it difficult to sum up any ill will towards the film (though I would have words over its definition of “romantic” gestures). The musical stylings are nice enough – I’m neither a fan of nor disposed against bluegrass, so I can’t really judge Future Folk’s objective quality as a band. It’s able to make good use of its limited funds, even if it never feels like the fates of two worlds are truly at stake. The movie is affable enough, but its “charms” just couldn’t reel me in.

The History of Future Folk is currently playing in New York and on VOD. It opens in LA this Friday. The film will continue to open in select theaters throughout June and July.