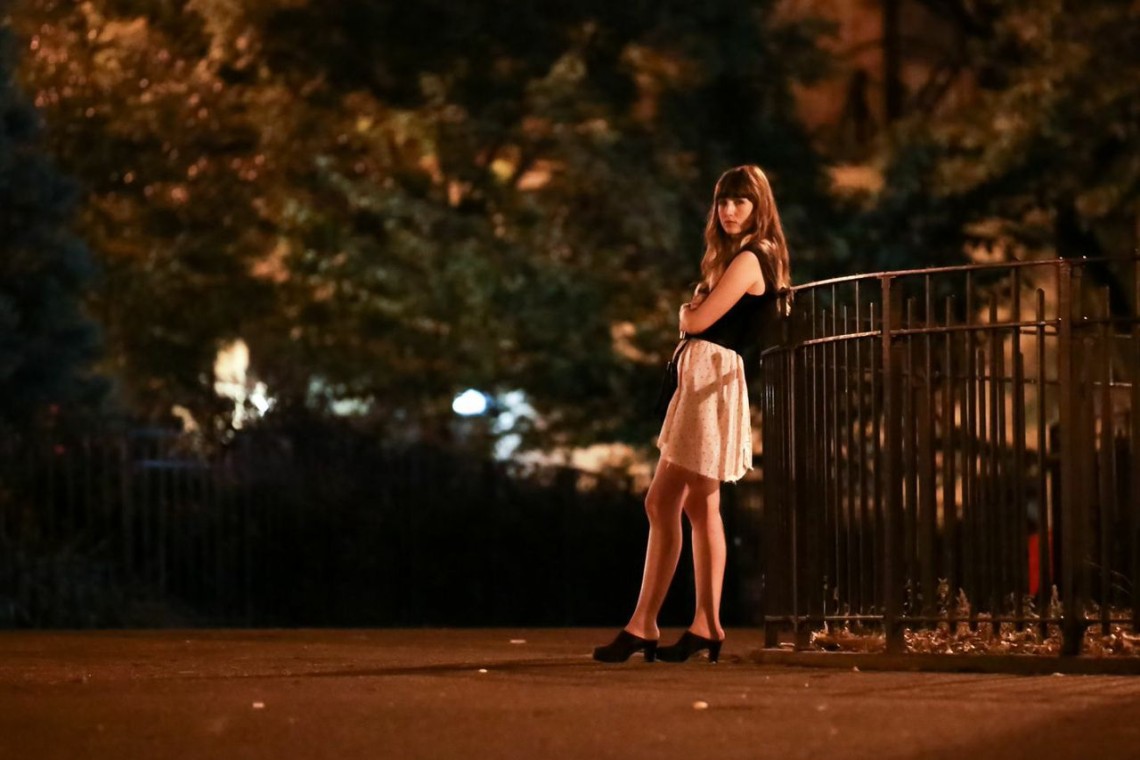 The Blu-ray release of Her includes a short documentary called Her: Love in the Modern Age, a concise and straightforward survey of a bunch of people discussing how technology has changed the trajectory of romantic relationships in the 21st century. It’s not a very insightful doc, merely reiterating what Her said better and with more sincerity. In Her’s high-concept premise, Samantha’s existence as an intangible person doesn’t change the element of trust in her relationship with Theodore (Joaquin Phoenix). With that in mind, Zachary Wigon’s The Heart Machine takes Her’s skeletal idea and has its tone nosedive in the other direction. It just might be better than Her.

Cody (John Gallagher Jr.) lives in Brooklyn, and is in a long-distance relationship with Virginia (Kate Lyn Sheil), who lives in Berlin. The situation has worked tangentially for them, for a time. Their relationship is not without its difficulties; the two occasionally argue, and the distance engenders tension from time to time. But generally speaking, all seems fine. When the webcams are off, though, both lead different lives. Cody is obsessed with Virginia’s whereabouts, skeptical of her supposed residence in Germany. Virginia, on the other hand, hooks up with strangers from time to time.

Besides each character’s superficial qualities– Cody being driven mad by the possibility that Virginia might live in the East Village, Virginia being a little frivolous–the illustrations we get of them on Skype is scant, presumably intentionally so. The characters (and the actors, for that matter) are strongest when they know they have an audience. Without that, they’re lost in the anonymity of the city. Cody playing detective and Virginia going about her daily life are as uninteresting in terms of who they are as people as possible. When they’re talking to one another, though, they glow. There’s a repartee between them, a chemistry that transcends the boundaries of geography and seeps through one screen and out of the other. They are at their most comfortable with one another and with themselves when they talk to each other. Granted, they aren’t particularly funny people. Cody and Virginia occupy the kind of couple dynamic where it doesn’t matter if they’re funny to other people; they make each other laugh. They play up their intonation so it follows the specific melody of how people talk when they’re attracted to one another: up, up, down, down, up. (So you think I’m funny?) That’s how it works for them.

And yet, when they’re alone and apart from each other, there’s a weight to their steps. The difference in their body language, tone of voice, and mindset is startling and astonishing. While the lack of concrete character idiosyncrasies or backstory might be seen as lazy writing or a disservice to the characters, their elusive quality is what makes the film stronger. The mystery is what attracts.

There’s a clear dichotomy between what Virginia does with Cody and what she does on her own time. Cody is her outlet, the person she can talk to. She’s on Blendr, a Tinder-esque hookup app, but while that may satisfy her sexual appetite, she talks to Cody for intimacy. It’s curious how that bifurcation appears in the film, to a point where The Heart Machine’s overall ideology seems a bit old-fashioned. Sex and love are not the same thing, it implies.

Wigon doesn’t explicitly ask if Cody and Virginia’s relationship is “real”; it’s the film’s center to push and pull in debating if a relationship can be real if it’s only online. It’s hard to decide if the film lands on one side or not, as there’s enough evidence for both. Virginia opines that in constructing an experience, its essence is essentially robbed of any meaning. And yet, she says earlier, regarding a poem she’s writing, “It’s the body we obsess over, and the mind is the prize.” These contradictions aren’t a bad thing.

But because the relationship is built on a lie (one Virginia is having trouble keeping up with), is it legitimate? One could argue many relationships are built on shaky, false foundations, but the difference in long-distance relationships is that they are heavily reliant on trust between the two partners. Trust is all they have to cling to, really. And yet, the rest of Cody and Virginia’s relationship seems performative, but honest and intangible in its own way. So why wouldn’t it count?

Is this just another entry into a piece of “Catfish culture”, as Libby Hill deems it? Dubbing it as such is a disservice to the AV Club piece Hill wrote, as much as it is a disservice to The Heart Machine. Hill’s piece argues that “Catfish culture” has seeped into popular culture, where “the beauty of humanity is it ability that though facts are immutable, the truth isn’t.” Her examples, ranging from the reality show spinoff from the doc Catfish to Cyrano de Bergerac, examine the idea that the masks we create are merely external details hovering over the authentic identities, the truth in our hearts. We can take comfort in Walter Ong’s assertion regarding this idea, as he writes, “To say writing is artificial is not to condemn it but to praise it. Like other artificial creations and indeed more than any other, it is utterly invaluable and indeed essential for the realization of fuller, interior, human potentials. Technologies are not mere exterior aids but also interior transformations of consciousness, and never more than when they affect the word.” But while this applies to something like Nora Ephron’s You’ve Got Mail, as Tina Hassannia suggests, it’s harder to discern whether Skype or FaceTime will count as something that externalizes the interior. Arguably, The Heart Machine says it does. It’s these extraneous details of Virginia’s life which are made up; the emotion, the rawness, and the peek into her heart, as it were, are honest and truthful.

Wigon’s film is also impressive in its attention to environmental details, from the sounds of an ambulance, to the way Cody’s obsession manifests itself. The film is spectacularly tense when it needs to be, as Chris White’s score mounts higher and louder, creating a sense of unease. Because The Heart Machine isn’t preoccupied with its characters’ saccharine sentiments and is unconcerned with wooing the audience (as in Her), it hooks you in with its indecisiveness about how we love now, as well as its complex and timeless ideas about sex and intimacy. It asks you to observe how those things mutate with time. The Heart Machine feels like the anti-Her, but, in a way, it’s the same thing.

2 thoughts on ““The Heart Machine””