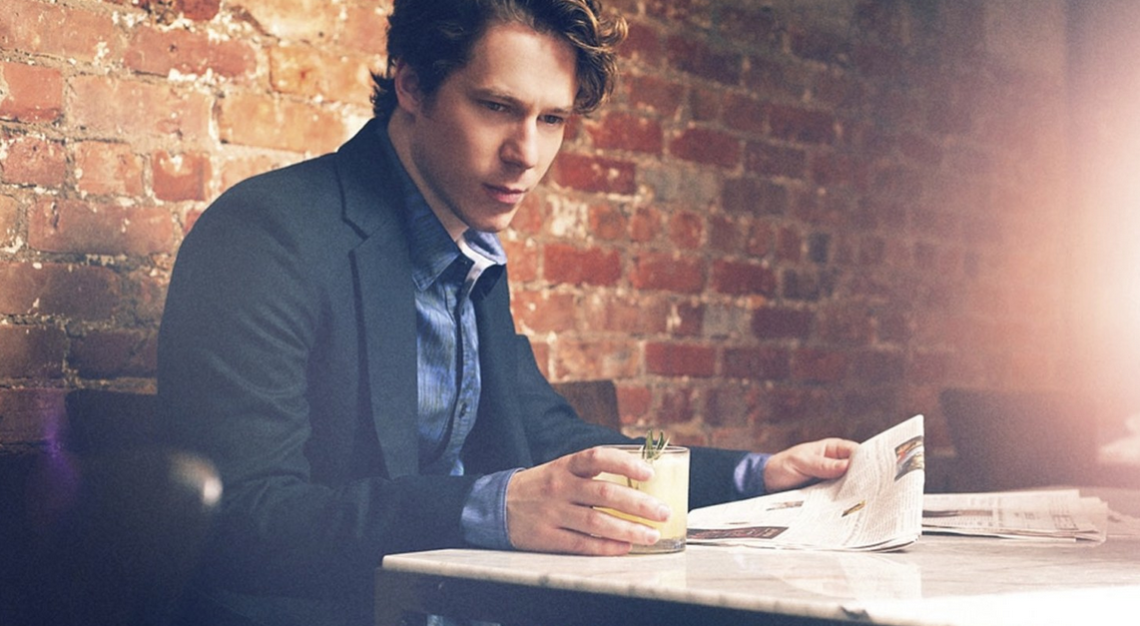 The Space Between Two People: An Interview with John Gallagher Jr.

After leaving a substantial mark on the theater scene with acclaimed performances in blockbuster Broadway musicals like Spring Awakening (for which he won a Tony Award in 2007) and American Idiot, John Gallagher Jr. has, in the past couple years, made inroads in film and television. Last year, he starred opposite Brie Larson in the crowd-pleasing foster-care drama Short Term 12. Soon, on Nov. 2, he can be seen in the HBO miniseries Olive Kitteridge alongside Frances McDormand, Richard Jenkins, and Bill Murray, just one week before Gallagher reprises his role as Jim Harper on the third and final season of Aaron Sorkin’s series The Newsroom, also on HBO.

Until then, there’s The Heart Machine, which opens Friday in theaters and on VOD. In Zachary Wigon’s new film, Gallagher plays Cody, a sensitive, perhaps too-trusting New Yorker who suspects that his long-distance girlfriend Virginia (Kate Lyn Sheil, Sun Don’t Shine, You’re Next), who he met online, is actually living in the same city as him and becomes obsessed with tracking her down. His secret investigation consumes his life outside of their Skype sessions, where he pretends to believe that she’s in Berlin and arriving in New York in a few weeks. There’s more going on beyond Virginia’s webcam as well, and both spend much of the film balancing their deceptive actions with irrefutably real romantic feelings for each other.

But because the relationship is built on such rickety foundation—which only dissolves further as it goes on—there’s plenty of emotional debris to pile up. Gallagher recently sat down with me to talk about the resulting paranoia, emotional manipulation, and frayed connection in our digitally devoted generation (which Kyle Turner, in his review for this site, points out is perhaps more articulately put here than in Spike Jonze’s Her), all of which he and Sheil embody in often uncomfortably relatable detail.

Movie Mezzanine: How do you relate to this character?

John Gallagher Jr.: Oh gosh, in a lot of ways. I absolutely relate to the fact that, at the end of the day, he’s decided to frame himself in what he thinks is the most flattering light—but behind the scenes, when the computer is off, he’s unraveling and coming apart, and the fact that he cannot communicate to this girl that he’s dating about his fears and about his obsessions and paranoia, that it actually starts driving them completely apart in the other direction, and he’s unable to stop himself as he loses control and goes on this kind of paranoid odyssey. I totally related to all of that. I mean, it’s definitely some sad and tricky dark depths to go to, but I think it’s a really basic part of trying to find yourself and then also trying to find happiness with another person.

Have you had experiences with online dating?

No, no I haven’t. I’ve been in long-distance relationships, and I’ve been in relationships that were born apart from each other. So you meet, but then life and circumstance takes you to different places in the world and you have to start talking via email a lot, or talking on the phone, or doing Skype and stuff. But I haven’t actually met anyone online or anything like that.

Does the long distance, in your experience, fray the relationship?

You know, it’s hard to say. I think it can, but I also think it depends on the relationships and set of circumstances, and a lot of the ways you communicate and what you share with each other.

I think the real tragedy of the movie is that they are good for each other, and they know it, but every day they have to keep up a new face, a new lie. Their feelings are real, but their actions aren’t.

Absolutely. And they’re both suffering from the same ailment, really, and are unable to shed light on it. And the tragedy of it is that, if they could both just say, “Hey guess what, I’m terrified, I’m imperfect, here it all is,” because that actually, I think, would be the thing to bring them together.

[Writer-director Zachary Wigon] was very careful to make Virginia the instigator in the progression of the relationship. She says “I love you” first, she’s the one who asks him to be her boyfriend, and he goes along with it because that’s the type of guy he is.

Yeah! And I think he doesn’t want to make any waves. Because I think if he saw this girl at a bar, he’d be too scared to talk to her. If he passed her on the street, it would be the girl that he walks by on the Brooklyn Bridge and 20 steps later thinks, “Do I turn around and ask for her number? Is that weird?” And the next thing you know, he’s over the bridge and he’s lost his opportunity. So, I think the fact that they meet online and she wants to be with him, I think that’s what makes him terrified to say, “Well, I’ve got all this baggage and these insecurities and all these fears and these things that I think are not cool and you’re going reject me if I show them to you, so let me just keep it like this. I’ll keep it perfectly framed, and I can control it that way, and you’ll like me if I do that.”

So, their feelings for each other are real but everything else is false. What do you think makes an authentic relationship?

Oh man, I don’t know. I guess you learn a little bit every day about them. But I do think one of the things that is sadly lacking from the relationship in the movie is openness and some transparency and some honesty. I mean, what even is that? Is it possible to be 100% open and honest with anyone? Maybe not, maybe yes, I don’t know. But I do know that there’s a kind of intrinsic and fundamental openness and sense of honesty that creates intimacy. I think the funny thing is that they do have this real connection, but they’re preventing themselves from being able to be really intimate with each other because of the fears and the boundaries and the anxiety and the insecurities and stuff. Good days and bad days, let it all show. I think that’s really hard to do.

The film captures the awkwardness of Skype really well, how there are no flattering angles, for example. And it works for the metaphor that you’re not making eye contact. Were you guys free to improvise?

We would do a couple takes as scripted, and then [Wigon] would usually give us a couple, one or two, to just do what we wanted and we could stick to the parameters of the script, or we could go off on tangents. Thankfully, most of the improvisation didn’t make it into the movie. There are elements of spontaneity that I think got captured that kept it alive and kept it feeling real. But for the most part we stuck to the script. But there was an ease to those Skype scenes, and in shooting the movie in general, especially coming from Aaron Sorkin, where he’s really word-perfect and every word is really as written.

I worry about Cody. I hope his next relationship benefits from this. But I also worry that he’s going to be snooping…

That he’ll be snooping for the rest of his life.

That was the part I couldn’t watch.

I literally had to look away. This is my horror movie.

[Laughs] That’s awesome! It’s hard stuff. I like to think that he’s going to come out better for it, I really do. That it’s got to be for something. It cannot all be for naught.

It definitely allows for him to stand up for himself, and to recognize that continuing the relationship after all the truths have come out would be a mistake.

Right. He realizes it’s something that has kind of been broken at that point. And they’re not in that place there.

Or fixed! In a way, depending.

There’s a poem by Virginia at the end that I think is essential because it allows her to be redeemable, because I feel like it’s easy for audiences to turn on her even though she’s not a villain.

Yeah, she’s a good person. They’re good people at the end of the day. We did a Q&A at a screening the other night, and somebody said something like, “Why do you think he walks away from her?” And I was like, “Well, I mean, that’s the last thing you see.” You never know where it’s going. So, I love that it ends on an ambiguous note. Because there’s something out there, you can’t really pin it down or capture it. I think a lot of it is for the audience to walk out of the theater and wonder what’s going to end up happening with these people.