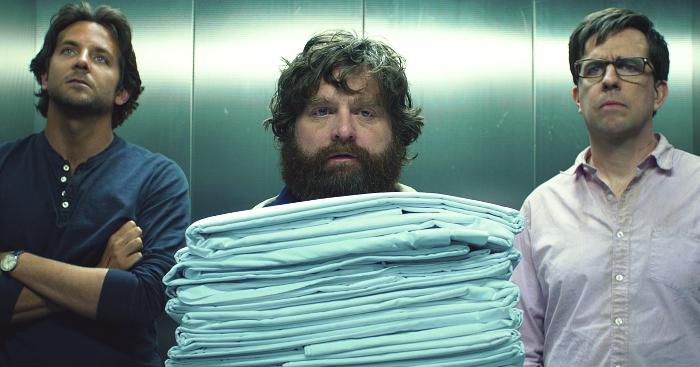 Like the inevitably disappointing trip to the kebab stand that concludes so many a subpar night of heavy drinking, so too does one of the most unnecessary trilogies in the history of motion pictures slump to its subdued and flavorless finale. Jettisoning the puzzle-piece structure of the previous films in favor of a more run-of-the-mill crime plot, The Hangover Part III nonetheless feels in many ways even lazier and more derivative than its predecessor. Say what you will about the problems with Part II, but at least it had a sense of escalation. Hell, at least it had jokes.

Maybe part of the reason The Hangover Part III feels so lame is that there’s no actual hangover (presumably director Todd Phillips and his co-writer Craig Mazin realized that even the most forgiving of viewers probably wouldn’t swallow the exact same story for three films in a row). Instead, the madness begins after Phil (Bradley Cooper), Stu (Ed Helms) and the increasingly unstable Alan (Zach Galifianakis) are kidnapped by heavy-weight mob boss Marshall (John Goodman). He needs their help recovering $21 million dollars worth of gold bars, stolen by the trio’s old associate, the flamboyant master criminal Leslie Chow (Ken Jeong). Marshall’s demands are simple: track down Chow and the bullion within seventy-two hours, or the long-suffering Doug (Justin Bartha) ends up six feet under ground.

So begins this studio-mandated afterthought, one that takes us first to Tijuana and then back to Las Vegas, all the while demonstrating absolutely no interest in developing its characters or its comedy. Most of the attempted humor comes from watching the insane antisocial behaviour of either Alan or Chow (the latter’s role, in particular, has been expanded quite considerably). What the writers here fail to appreciate, however, is that in the original film, both Jeong and Galifianakis were relative up-and-comers. In contrast, we’ve now been watching the same distinctive shtick for four years, and it hasn’t gotten funnier with age. By the time they’re given the bulk of the screen time in this film, the pair are not only predictable, but agonisingly unfunny.

As for Helms and Cooper, at this point they’re basically being paid to stand there and act shocked and/or confused and/or horrified by the actions of their zanier (read: more repellent) co-stars. Cooper, in particular, having been outstanding in recent films like Silver Linings Playbook and The Place Beyond the Pines, looks flat out bored by the material, and it’s easy to understand why. The same is true of Goodman, uncharacteristically limp in what is basically a one-dimensional rehash of his Big Lebowski role. A cameo by Melissa McCarthy, meanwhile, sees the actress continue down her path of rapidly diminishing returns playing the same outlandish caricature she did in Identity Thief and Bridesmaids.

Strange as it may sound, The Hangover Part III is so woefully unambitious that it can’t even be bothered being debauched. For all the brazen self-thievery of the first sequel that generated quite a few laughs out of shock and revulsion, this not-so-epic finale simply resorts to sequences of animal cruelty (okay, murder).

Truthfully even those feel sort of half-assed.