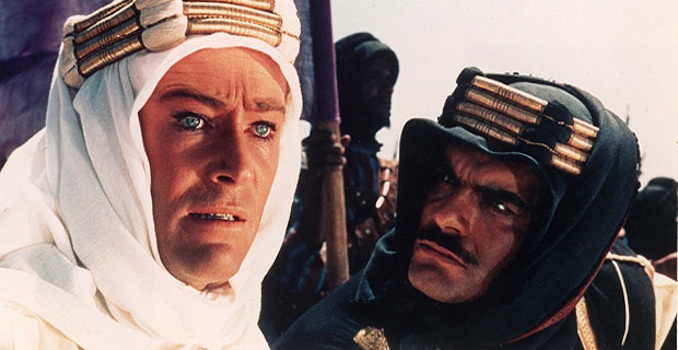 VHS reigned as the most popular home video format for 20 years before DVDs replaced it, and DVDs enjoyed just half that time before Blu-Ray emerged as the studio-backed video format. Now hints of 4K TVs and Red-Ray threaten to give this latest usurper but half the life of the thing it displaced, and streaming/cloud storage may cut the legs from under Red-Ray before it even gets its footing. So it goes with technology, though some Blu-Ray releases display such A/V quality that one wonders how much more things can improve. That can be plainly seen in these 10 (well, 11) releases, each of which has its own merits and all of which show how dedication and care can rejuvenate unlikely oldies and preserve new works for posterity. [Note: This list excludes Criterion Collection discs. A separate list counting down the best Criterions of the year can be found here.] 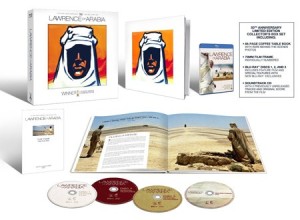 The obvious number one choice. Sony’s 4K restoration of one of the best films of all time makes for arguably the most gorgeous Blu-Ray yet released. Lawrence will never truly look its best on a screen not three times as tall as a person, but this release comes damn close. Revel in every intricate detail of image and the crystal-clear bombast of Maurice Jarré’s score, and notice how, with a film like this, every advancement in A/V clarity helps bring out the depth underneath its technical construction. And while Warner’s overpriced boxed sets of classic reissues tend to overflow with unnecessary fluff, Sony pack their deluxe release with genuinely interesting features and a massive booklet that eschews weak, fawning blurbs for actual production content. And where Warner’s too often packages a silly themed item with their sets (umbrella for Singin’ in the Rain, drink coasters for Casablanca), Sony includes the only thing that matters: a still from the 70mm print. This is an absolute must-own.

2. The Girl With the Dragon Tattoo (Sony Pictures) 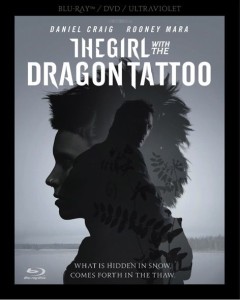 David Fincher’s home video releases are always highlights, filled with commentaries and absurdly in-depth features that go well beyond the usual EPK fluff. Nevertheless, Sony’s three-disc release of The Girl With the Dragon Tattoo manages to stand out among its peers. Flawlessly reproducing Jeff Cronenworth’s digital cinematography of plunging black levels and Nordic chill, as well as an audio track that howls with Trent Rezor and Atticus Ross’ hair-raising score, this Blu-Ray set also comes stacked with bonus features. A typically great and informative commentary track by Fincher is joined by a second disc devoted entirely to an exhaustive record of production that covers just about every base on the film. Fincher’s Dragon Tattoo is one of the great works of digital cinema as autocritique (see also: Michael Mann’s Miami Vice, David Cronenberg’s Cosmopolis, Jean-Luc Godard’s Film Socialisme), and this Blu-Ray gives it the respect it deserves. 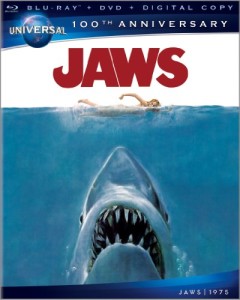 Open up Universal’s exemplary, definitive release of Jaws and the goodies come spilling out like the Kitner boy all over the dock. This Blu-Ray has been a long-time coming, but the wait was worth it. A new restoration gives the film new life and makes its technical mastery that much more apparent, with a new 7.1 lossless audio track that fixes most of the errors in the previous stereo remix and even includes a bolstered, lossless version of the original mono for good measure. The wealth of extras slowly amassed over years of re-releases make it into the package, and they get supplemented one last (one hopes) time by the great fan-doc The Shark Is Still Working. With the exception of the heavily DNR-ed Jurassic Park films, Steven Spielberg’s work has always shined on Blu-Ray, but never to this extent. 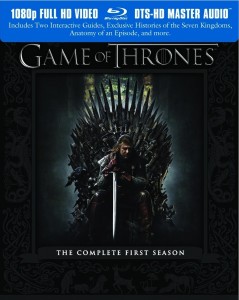 Game of Thrones was a no-brainer for HBO: all the gore of Rome meets the political intrigues of Boardwalk Empire and The Wire. Yet the channel’s commitment to collecting powerhouse talent behind the camera as much as in front of it results in a show that, though still clearly made for television, achieves a level of technical grandeur that regularly pushes against budgetary limitations. HBO’s set includes a horde of extras that delve into George R.R. Martin’s world, though some of the best extras may be the wonderfully unpretentious commentary tracks, each featuring a different line-up but all linked by a sense of glee at what their characters get up to even as the show follows complex political and emotional arcs. 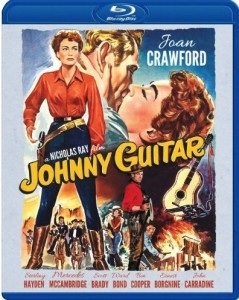 Olive Films has done the world a solid in cleaning up this criminally unavailable masterpiece by one of the all-time greats, Nicholas Ray, and presenting a transfer that spares us all the horror of having to watch a scratchy, pixellated VHSrip of one of the most beautiful films of all time. The colors explode across Ray’s revisionist Western as they were always meant to, an overwhelming collage of yellows, reds and skies of impossible purple that aesthetically upends the genre as much as its warped and inverted gender dynamics undermine traditional Western symbology. Too much of Ray’s work remains legally unavailable in his home country, but this is a crucial step toward rectifying that travesty. 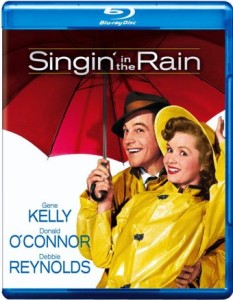 The three-strip Technicolor positively sizzles on this transfer, struck from a fresh restoration. The freewheeling, playfully nose-tweaking ode to Hollywood has never seemed so fluid in its movement through wildly different setpieces, and even Gene Kelly’s indulgent Broadway Melody works better with the added visual flair. Like most of Warner’s standalone issues of gargantuan box sets, the single-disc release of Singin’ contains many of the best features, meaning you can save money and shelf space and still get the most out of this wonderful film.

7. To Catch a Thief (Paramount) 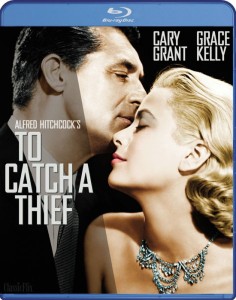 A minor Hitchcock success enlivened by its two leads, To Catch a Thief nevertheless received a transfer worthy of one of his greatest works. Chalk it up to the benefits of VistaVision, perhaps, but this is the best-looking Hitchcock Blu-Ray to date, with only some minor aliasing on Cary Grant’s striped shirt to detract from an otherwise perfect image quality. Not only are the expressionist colors of this gay romp vividly rendered, skin tones and textures register as well. I wish, say, The Birds or Marnie could get a treatment this good (to say nothing of neglected masterworks like The Wrong Man and Under Capricorn), but this gorgeous Blu-Ray is welcome even for a lighter piece by the master. 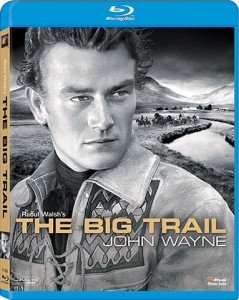 Working a with a nascent widescreen format that would be delayed by the financial considerations of the Great Depression, director Raoul Walsh crafts an uneven but visually stunning Western that anticipates the genre’s glory days by more than a decade. Fox’s Blu-Ray includes both the Academy ratio version and the “Grandeur” widescreen edition, both versions slightly different as the cameras use alternate angles and takes. But the Grandeur cut, though more worn than the 4×3 version, is the one you want. Get one look at the way Walsh arranges wagons to fill the gulfs of extra space afforded to him, and the minor scratches and print damage matter not at all. Also, they serve as a good wallop to the head of anyone who thinks workmen lack style. 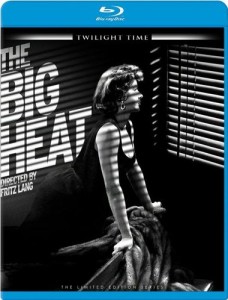 It seems odd, even ghastly, to me that The Big Heat, possibly Fritz Lang’s finest American effort (I also have eyes for When the City Sleeps) should come out on Blu-Ray as one of Twilight Time’s limited-edition releases. The thought of only 3,000 copies of such a stone-cold classic being produced is a horror eclipsed only by the inexplicable fact that it has yet to sell out. But the world’s loss could be your gain: Twilight Time’s superb reproduction of Charles Lang’s (no relation) cinematography rates with the best black-and-white hi-def transfers of the year. Lang is one of the all-time greats, and it does the heart good to see him treated so well outside of Kino’s superlative work on his oeuvre. 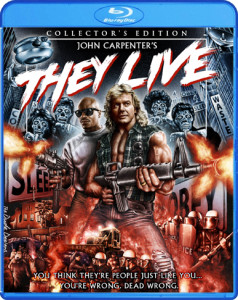 They Live stands at the apex of a fantastically strong first year from Shout! Factory’s new, horror-focused branch Scream Factory, which quickly built a pedigree for wonderful releases of cult films. Carpenter’s fantastically looks as pristine as ever with this Blu-Ray transfer, and those who have had the pleasure of listening to one of the director’s giddily unpretentious, self-effacing commentary tracks will be thrilled to learn that the commentary with Carpenter and star Roddy Piper, previously only on a Region 2 DVD, is included. With a handful of fresh extras to boot, They Live sets a standard for the inconsistent treatment of Carpenter’s filmography on Blu-Ray, and one can only hope that, with Scream’s announcement of an upcoming Blu-Ray of The Fog, that they continue to acquire the rights to his work. 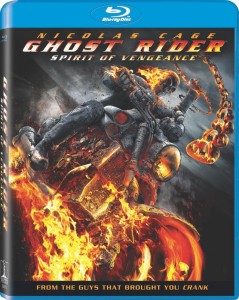 Sony’s Blu-Ray of one of the year’s most underrated pictures faithfully replicates the grimy, neo-grindhouse trappings of its style, but it is more rewarding in its choice of extras. The picture-in-picture commentary stands as perhaps the best extra of the year, in which the directors hold forth with a marvelous lack of pretension even as they describe a fantastically experimental approach More surface pleasure than their borderline avant-garde Crank films or Gamer‘s symbiosis of satiric content and form, Ghost Rider 2 nevertheless tries to create new aesthetic paths for a genre that has rapidly fallen into vanilla homogeneity. As the extras reveal, their advantage may be that, in contrast to the inflated egos working on the big properties, these two may not know just how smart they really are.