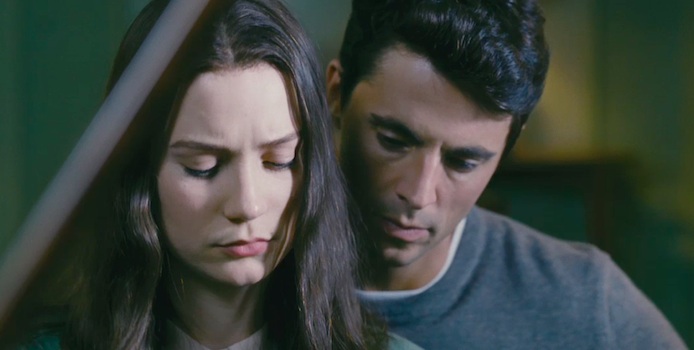 At what point does style become substance? Many of Alfred Hitchcock’s thrillers were really quite pedestrian, predictable stories, but the director’s mastery of style and craft turned many of those films into beautiful works of art. The same could be said of Park Chan-wook’s English-language debut, Stoker, which happens to take obvious narrative cues from Hitch’s Shadow of a Doubt.

The film begins with the death of India Stoker’s (Mia Wasikowska) father on her 18th birthday. At the funeral, India meets her Uncle Charlie (Matthew Goode) for the first time. He’s a mysterious figure who she had never even heard of before. It’s not long before he informs her that he will be staying with India and her mother (Nicole Kidman) for the foreseeable future.

While his intentions are not immediately clear, the film spares little time in revealing Charlie as a deranged killer. From there on out, the film focuses on the bizarre battle of wits between India and her uncle.

That’s all mere plot, though. The real interest of the film is India’s transformation from child into adult. Stoker is an exceptionally deranged coming-of-age tale. India’s sexual awakening in the film is incredibly troubling, and writer Wentworth Miller and director Park never flinch from exploring it, including hints of incestuous feelings between all three members of the Stoker family.

The real beauty of Stoker comes from Park’s incredible style. He directs the actors towards a mannered style of acting uncommon in modern films. He also infuses the tale with a great Southern Gothic tone—all the more impressive considering Park is not American. Then there are all the visual tricks: freeze-edits, camera swoops during dialogue scenes, sudden close-ups, carefully placed shaky-cam, incredibly creative scene transitions, and a looseness of chronology to keep the audience consistently on edge.

Park takes a fun, minor thriller plot and turns it into something magnificent. It’s difficult not to sit completely in awe of the way Park pieces together the story through his deliberate, kitchen-sink approach. Even the director’s grasp of humor comes through, with many of the most unsettling scenes carrying a dark sense of comedy. On top of it all is Clint Mansell’s fantastic musical score, tying everything else in the picture together into a kind of symphony of depravity.

Stoker is a truly great film. A remarkable one, really. Not because of its story—though its story is quite good—but because of a blistering directorial vision from one of the most stylish directors working today. Much like another relatively recent “style-over-substance” film, Drive, Park’s Stoker will no doubt be dismissed by a few as little more than a work of filmmaking panache. The panache, though, is what makes the film great. Like so many A-quality B-movies before it, Park takes Stoker’s intentionally gaudy source material and elevates it to beautifully realized and artistically transcendent heights.