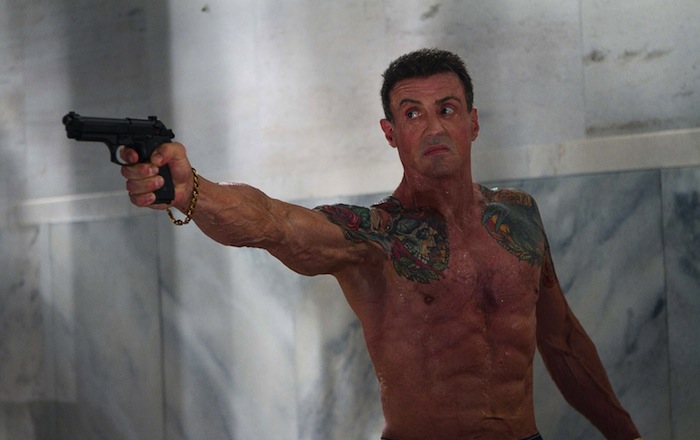 Stallone Goes Over the Hill in Bullet to the Head

Filled with too many jumpy, overexposed helicopter shots that recall a bad CSI-ripoff, the opening of Bullet to the Head hardly does justice to the man whose grimy retelling of Anabasis, The Warriors, made such intimate and frightening use of New York’s untamed streets. It gets Walter Hill’s film—his first in a decade—off on the wrong foot and traps the film in a pedestrian style that the director spends the rest of the film battling.

Hill stacks a wafer-thin plot on top of such shots, filled with MacGuffins of sociopolitical intrigue included seemingly just to be there. In less capable hands, this Sylvester Stallone vehicle would have crashed before it even got off the ground. Once Hill settles into the action, however, Bullet to the Head stabilizes into into a solid genre picture. Hill himself describes the film as an “anti-buddy” movie, a sentiment borne out in the loathing that passes between Stallone’s principled hitman, Johnny Bobo, and Taylor Kwon (Sung Kang), a DC detective sent to New Orleans to investigate the death of the crooked cop Johnny took out at the start.

Even the begrudging of respect that gradually brings two opposites together in these kinds of movies is absent, two men steadfastly committed to their rules of conduct acquiescing to the other only when forced to. As Johnny hunts down the people who double-crossed him and Taylor follows along to crack the case, the pair constantly quarrels on the crucial difference encoded in the chosen preposition of either taking the responsible parties in or taking them out.

If Hill does not avoid some of the pitfalls of modern action direction—stabs at visceral montages that can distance as much as entrap—he at least gets a lot of mileage out of the special effects of Stallone’s ossified bulk, or Jason Momoa’s younger, spryer muscle. (Indeed, Momoa nearly walks away with the show as the chief henchman, his taciturn mercenary fitting Hill’s penchant for silent savages better than the wisecracking leads.) A few explosions and post-murder quips tie the movie to its generic roots, but otherwise his brutally physical fights leave little room for cheers. A brawl in a bathhouse typifies Hill’s approach, as two men clamor after each other with professional skills and the clumsiness of spontaneity, clawing and punching and choking until one can reach a working pistol. This scene, like others, leaves a witness to the violence, and the horrified faces and stunned silence of those left alive become the last word for most of the killing.

That small bit of distance crucially breaks the film from its straightforward, occasionally incoherent story, and it helps Hill refocus onto an examination of what happens when different codes collide. As Hill mentions in the linked interview, the two leads live by fundamentally incompatible views of their work, and of justice. But Momoa’s Keegan also has his own code, one that makes him more dangerous than even Johnny because, as the film’s ringleader says late in the film, one can never trust “someone who doesn’t care enough about money.”

The insoluble combination of these credos, all of them tested and manifested in grim ways, leaves the film feeling unresolved even with a boilerplate ending. For once, the promise of a future confrontation seems inevitable rather than the usual perfunctory finger-wagging of two men now bonded by admiration.