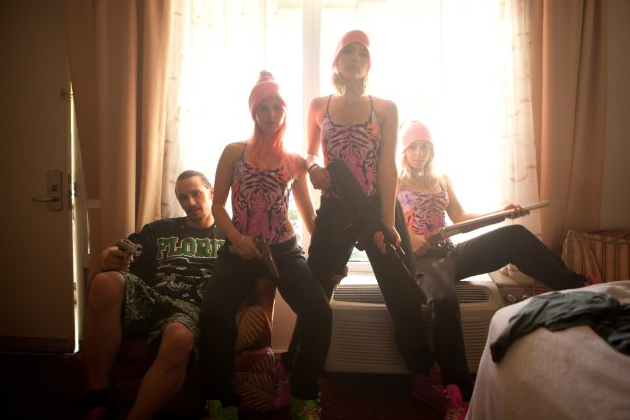 I really don’t know if I’m supposed to be offended by Spring Breakers. After all, the opening five minutes are a Skrillex ode to “SPRING BREAK FOREVERRR” accentuated by gyrating topless co-eds being sprayed with beer by their male counterparts on the beach. Ass-shaking, beer money shots, the whole shebang. And, if you’re paying close attention, you’ll spot the four girls — three rowdy blondes and one shy brunette — matching the insanity in their Day-Glo bikinis and shit-eating grins. The heroines of Harmony Korine’s latest film are having a ball at spring break, so shouldn’t we be doing the same?

However, these freewheeling hotties are not your typical college girls. At first they seem normal enough: Bored by droning classes and — in the case of Gomez’s uber-religious character Faith — soulless Christian peer groups, they look to spring break as some sort of grand escape to a whole other plane of eternal fun. But despite having planned for this for the whole semester, they don’t have the appropriate funds. Brit (Benson) and Candy (Hudgens), the ones you really want to watch this whole movie, come up with the perfectly logical solution that they rob a convenience store — a sequence that’s just aces, as we witness it in one take from the perspective of Cotty (Rachel Korine) in the getaway car. 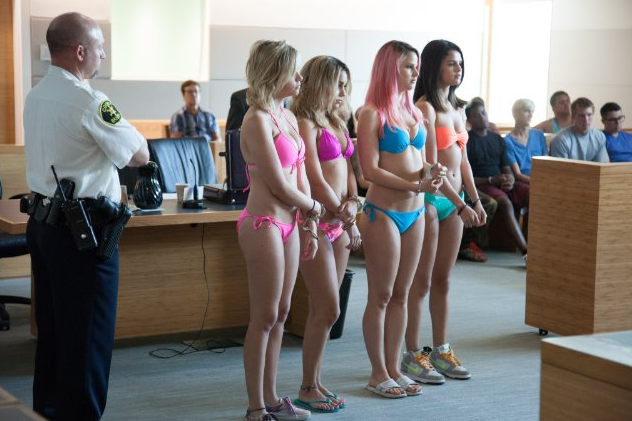 Television Without Pity made the keen point that with each of Korine’s repetitive returns to the dubstep opening sequence, “it seems a bit less like a party and more like the seventh circle of hell.” One of the movie’s utterly bizarre motifs is the girls sweetly calling home to tell their parents they love them even as we’re witnessing their debauchery. This is kicked off by Faith dreamily relating their adventures to her grandmother with the hushed reverence of someone who’s been visited by the Holy Spirit. And when grim reality in the form of the police intrude upon their hedonistic romp, Faith’s tearful pleas — “It wasn’t supposed to end like this” — are heartbreaking.

Their naïveté may appear laughable at first, but the joke is on us. Because once the threat of losing spring break forever is dangled in front of them, these beautiful creatures once again turn coldly calculating. When the skeevily magnanimous Alien (James Franco) enters about halfway through the film, it seems like he’s swooped in to rescue these damsels in distress from their parents getting, like, totally pissed at them — but in reality, the girls have just nabbed their biggest fish yet.

In contrast to how the girls are seduced by the escape of spring break, Alien revels in his material goods. In the first of many rambling, impassioned monologues muttered through double-decker silver grills, he extols the values of his stacks of drugs and cash, his lovingly-arranged wall collection of guns, his endless collection of board shorts. Candy, Cotty, Brit, and Faith chased the idea of luxurious escape, but Alien shows them the reality of SPRING BREAK FOREVERRR. 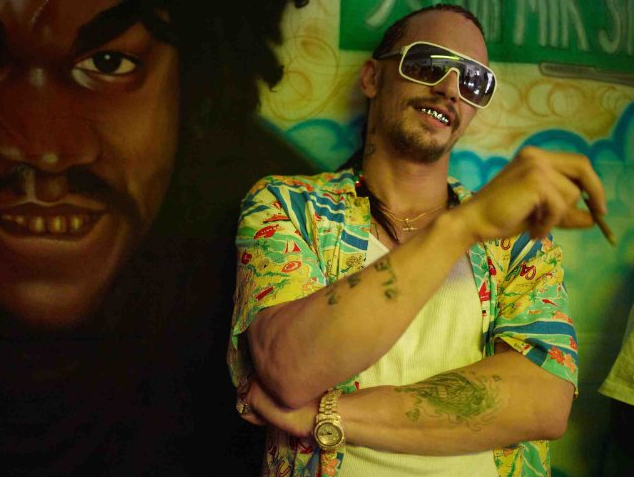 When I reviewed Oz the Great and Powerful recently, I argued that Franco had been preparing for the role of charlatan-turned-wizard Oscar Diggs for the past five years, as he honed his performance-artist persona. But his ability to carry off a fast-talking faker is due entirely to roles like Alien, which should be too ridiculous to work but instead comes out pitch-perfect. Whether or not you’re a Franco fan, this is a landmark performance of his career.

As you might have guessed, this is where the movie goes off the deep end in a way that had my friend and me gasping “what the fuck?” every few minutes, but is also strangely gratifying. As Alien welcomes the foursome into his world, first as cute arm pieces and then as collaborators, it’s like they’re locked in a race for who spirals into insanity faster. They egg each other on, Alien stalking the girls with a mix of unapologetic sexual attraction and surprisingly earnest love poems. (Not to mention a disturbing sequence involving Alien’s gun collection that brought to mind the uncomfortable “chicken drumstick fellatio” scene from Killer Joe.)

One of the most delightfully absurd scenes involves Alien sitting at his outdoor piano performing a soulful rendition of Britney Spears’ most depressing song “Everytime” while the girl dance around in ski masks carrying rifles. Does Alien brainwash them into becoming his associates and performing hits, or is this the calling they’ve always longed for? (Alien’s nemesis Archie is played by rapper Gucci Mane, made most famous by his regrettable decision to tattoo an ice cream cone on his face. Because of course.) 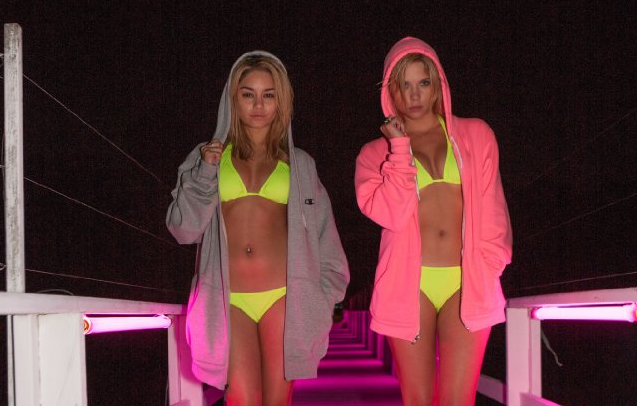 Korine doesn’t lay blame on any one aspect of popular culture that might have molded these girls into cold-blooded vixens and killers, though he does mock the instant-fame allure of Girls Gone Wild. It’s up to the audience to decide whether to sympathize with these girls — especially as their ranks start to crumble — or to be horrified by the lengths to which they’ll go for the endless party.

So yes, Spring Breakers is likely the craziest, most balls-to-the-wall movie of 2013. Some elements seem unnecessary or downright offensive, but you also can’t look away from this bizarre, dysfunctional quintet. Because once I stripped away all of the aspects that gave this project its wild hype, I came to this inarguable point: Harmony Korine got exactly the kind of movie he set out to make. And that, in its strange way, is a gift to you.