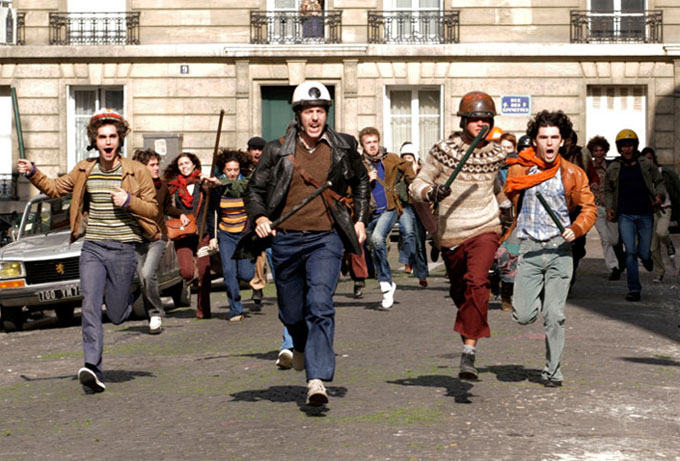 Review of Something in the Air

The U.S. title of Olivier Assayas’ new film, Something in the Air, misleads from the direct implications of the original Apès Mai, translated literally as “After May”. The former gives the impression of trouble stirring, of planets aligning to generate an uneasy atmosphere that must be addressed. But the latter, which situates the film’s temporal setting after the events of May ‘68, bluntly alerts the audience that the revolution has already passed, leaving a group of politicized teenagers eager to join the struggle to pick up the pieces.

Not that these kids realize their true, banal role at first; Assayas opens the film with darting handheld pans and hard cuts of students assembling with makeshift riot gear to confront cops in the real thing, who promptly fire tear gas canisters into the crowd and beat any teen they can get their hands on. Similarly visceral shots charge after-school meetings with inchoate zeal as fly-on-the-wall recordings of radical teens exchanging polemics and debate. Eric Gautier’s naturalistic, quietly observant cinematography, as it does in Assayas’ metatextual Irma Vep, finds a balance between a part of its surrounding and a detached watcher. The camera picks up each emotion as it ripples among the radicals but also views them critically enough to see that their clandestine meetings and covert night missions amount to little more than light vandalism and misdirected violence.

This puts an ironic current beneath the rush of the early scenes that better sets up the melancholy that builds and builds as the youths go their separate ways to and settle into positions at either end of the dialectic between apolitical artists and committed Leftists. Few find comfort these ends, though: artists disappear in figurative (and literal) self-immolation spurred by drugs and withering hedonism, while the radicals find themselves stifled by ideology even as their comrades remain frustratingly static in key areas, particularly gender relations.

Amid these groups of unhappily settled friends moves the peripatetic Gilles (Clément Métayer), whose desire for intellectual social change clashes with his equally burning artistic ambitions. Attempting to find a middle ground, Gilles thoughtfully accepts the criticisms leveled by the pseudonymous Simon Leys’ account of China’s disastrous Cultural Revolution and struggles to find a useful voice in his art. Nevertheless, Gilles’ quest to join the two dialectics only sends him further in both directions at once, searching for a political truth even further to the left than Marxism or anarchism as his art turns more personal to deal with other frustrations.

He also subconsciously separates out his irreconcilable leanings into two romantic interests, the carefree artist Laure (Carole Combes) and committed radical Christine (Lola Créton). Framing Gilles’ personal search for belonging through his relationships places Something in the Air within a conventional framework, and when a crowd of displaced radicals asks a filmmaking collective why their revolutionary films employ classical techniques instead of “revolutionary syntax,” Assayas may be indicting himself along with the posturing documentarians.

But the director’s split focus instead foregrounds the constant oscillations of youth, with its still-malleable views and goals, against the picture’s headier dialectics. In conflating his romances with his existential quandaries, Gilles is simply reducing the number of things he has to think about, though the women’s symbolic embodiments also show the tangible touchstones of what may seem purely theoretical contemplation. Gilles’ basic search for a place to belong, emotionally, politically and existentially, crafts a complicated portrait of the intersecting motives that link social and personal progress and stagnation.

Assayas’ previous two features, Summer Hours and Carlos, played on riffs of commodity fetishism that defined its characters through their objects, humanly in the case of Summer Hours and ironically in Carlos. Here, however, the youths are unmoored from their bourgeois backgrounds and set adrift in a world where they cannot seem to ascribe value to anything, even their own creations. Gilles burns his artwork once it has been seen by its intended audience, and the only anchors of time are the critical texts he can be seen with at various stages of his journey. Christine and other friends similarly have nothing to latch onto, be it a place or even a few signifying trinkets; even Laure’s château means nothing, the manor mostly lit by the bonfires that rage just outside it as the girl trudges around in a stupor.

That they are so removed from commodification and a clearly defined sense of purpose, however, makes them more successful in their drive to escape the status quo than they realize. A soundtrack of form-defying rock (Soft Machine, Kevin Ayers, Captain Beefheart, among others) elicits not the political fire in the students’ bellies but their tentative, occasionally aimless steps into a world that did change, albeit not in the ways they expected. Their unsatisfied movements between ideologies, purposes, professions, et al. marks a freedom unavailable to their predecessors. The gentle irony in the film’s somber tone devastatingly suggests that the burden of this liberation may make the corrupted but safe old ways preferable in comparison.

One thought on “Review of Something in the Air”