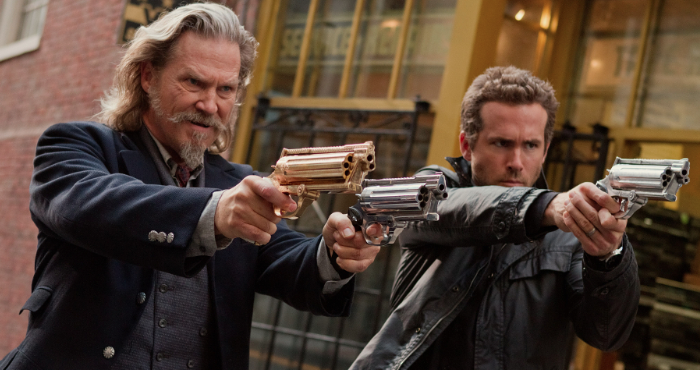 As a general principle films that are screened for critics the night before their release (as R.I.P.D. was) tend to be, shall we say, terrible. However, as someone who attempts to not unfairly malign a piece of cinema before it begins to flicker onto the silver screen, I was hoping director Robert Schwentke’s adaptation of the Dark Horse comic was going to be an exception to the rule, a movie that – despite just about everyone’s negative preconceptions – managed to be entertaining and delightful. Unfortunately R.I.P.D. is exactly the film you probably presumed it was going to be: ceaselessly idiotic, perpetually repellant, and gobsmackingly unoriginal.

Imagine a watered down version of Men In Black, except littered with unfunny dialogue and ghastly special effect work and you have R.I.P.D. Instead of Tommy Lee Jones and Will Smith cracking wise as they handle pressing extraterrestrial affairs, we have Jeff Bridges and Ryan Reynolds, two deceased officers who serve the Rest In Peace Department, a place for dead cops to morally redeem themselves before final judgement by protecting Earth from destructive creatures refusing to move into the afterlife.

After being gunned down by an unlikely foe, Nick (Reynolds) ascends to R.I.P.D. where he is immediately partnered with Roy (Bridges), a free-wheeling, Old West lawman who’s now a veteran of the program. Together the two officers must unravel Nick’s increasingly complex murder, which may or may not result in an apocalypse. Dispatched to Boston, where Nick’s murder occurred, the two dissimilar officers inevitably forge a bond, swapping stories of their past while attempting to protect the future.

With The Green Lantern, The Change-Up, and now R.I.P.D., Reynolds is on quite the spree of headlining in brain-cell killing duds. Here’s a perfect example of a charismatic actor who has unfortunately taken the path of least resistance, starring in Hollywood drivel that certainly deliver the prodigious paychecks but don’t attempt to tap into the potential he’s demonstrated in films like Adventureland and Buried. More disheartening though is Bridges, who is as witless and unintelligible as I’ve ever seen him. Roy is some strange mix of The Dude and Rooster Cogburn — two more interesting characters in two infinitely superior movies.

While most of the blame should be directed towards the script penned by writing team Phil Hay and Matt Manfredi (both of whom are responsible for Clash of the Titans and Aeon Flux), the talent on screen must bare some of the responsibility for this treacherous train-wreck of a movie. The pain doesn’t end there though. R.I.P.D’s thespian and narrative troubles are exacerbated by hectic camerawork (i.e. the film has a tendency to, for no rhyme or reason, zoom in and out of focus) and a superfluous 3D post-production conversion that consistently dims an already dark picture.

I could go on and on listing the issues that plague R.I.P.D., but there’s nothing I could say that would more aptly prepare you for the type of cinematic experience you’ll endure better than the film’s trailer. If you’ve seen the two minute clip, simply envision that story being elongated into a 96-minute action/comedy adventure where the action is enervating and the comedy is nowhere to be found.