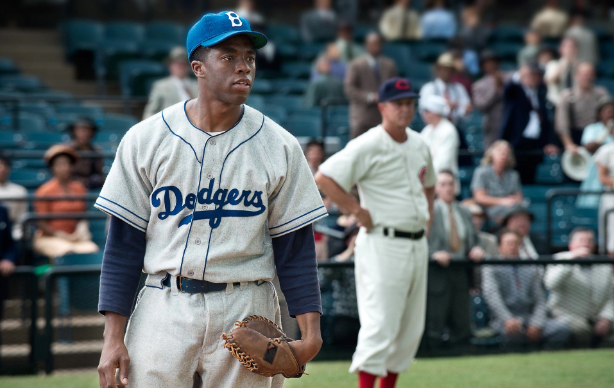 Through the annals of time Jackie Robinson has become much more than a hall-of-fame baseball player. He’s evolved into a beloved hero, a symbol of hope for those who felt hopeless, an individualist who needed virtually no one and inspired just about everyone.

And yet 42 dares to take on the daunting task of encapsulating the famed 2nd baseman’s life in merely 128 minutes. That Brian Helgeland’s relentlessly earnest fourth feature film manages to not crumble into pieces is impressive. That it effectively pulls at our heartstrings is a miracle.

The film begins at the tail end of WWII in 1945. Soldiers are coming home. Families are reunited. The gruesome war is ending. The economy is booming. America is blissful. All of our problems seem to have vanished. Except, unfortunately, for the racial segregation that continued to plague our nation.

Of course, 42 is not some commentary on Post-WWII America (we have The Master for that). This is a crowd-pleasing bio-picture chronicling the career of Jackie Robinson (Chadwick Boseman), which began in the Negro leagues of baseball. However, despite a majority of Americans against the prospect of a black man playing in the MLB, Brooklyn Dodgers executive Branch Rickey (Harrison Ford) decided it was time for a change.

What followed was the game-changing, history-making contract Robinson signed with the Dodgers, effectively making him the first African-American to play in Major League Baseball. Naturally, this move by Rickey received scrutiny from the American populace. This color-barrier-breaking contract forces Robinson to face (without fighting back) disgusting racism from a country refusing to support a fellow American. The only people he can rely on for support are Rickey, Wendell Smith (the African-American reporter for The Courier who is telling this story in a flashback, played by André Holland), teammate Pee Wee Reese (Lucas Black), and his affectionate wife Rachel Robinson (Nicole Beharie).

Helgeland recreates the ups and downs of Robinson’s career rather well. Scenes of Robinson’s extraordinary athleticism are interwoven with a compassionate moment between him and a his wife, or a (although preachy and long-winded) sermon on America’s inability to purvey and promote racial equality.

If film history as taught us anything, it’s that the great bio-pictures (and there aren’t many of them) scratch underneath the surface and into the subject with humanity. They flesh out the myth, the hero, the legend, and present the individual for what he or she is: a human being. 42 falls significantly short of greatness. Perhaps because the movie feels the need to repeat similar scenes (with the same themes and political messages) over and over again until they begin to blur together.

The film does tend to border on being a textbook, by-the-numbers hagiography. And yet every time I started to come to that conclusion, 42 would surprise me with emotion that inexplicably connected. It’s that sweeping sentimentality, which is both the film’s greatest virtue and vice, that captures our attention. As generic as it occasionally is, 42 is a lovely ode to a bygone era of filmmaking: one that led with its heart first and intellect second.