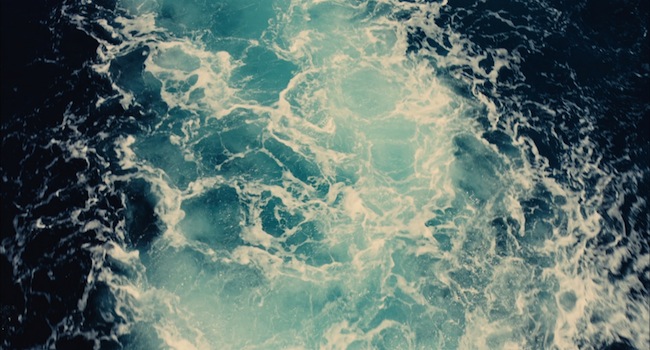 Urges and Desires in P.T. Anderson’s The Master

The Master, Paul Thomas Anderson’s acclaimed film from last year, is “about” a lot of things. The effect of war on the psyche; the displacement of returning veterans; the personal relationship to authority; the bond between males; the existence of cult; the animalistic nature of man; the male sexual appetite. It’s no wonder so many critics claimed that the film requires multiple viewings when there’s so much to unpack. This was true of my own experience. My first viewing of the film, beautiful as it was, washed right over me and I didn’t know what to take away. A second viewing began to crystalize certain ideas in my mind about what the film was doing and saying. The biggest takeaway was in how the film explored the idea of urges versus desires.

Urges and desires are synonymous terms, but not fully equal ones. An urge comes from a more impulsive, instinctual place, whereas a desire encompasses a sense of greater longing. An urge is like an impulse in the moment, while a desire is a more deeply held feeling.

The distinction is important because it’s at the heart of what The Master is about, including its depictions of sexuality, dominance, alcoholism and wild behavior. All these explorations are centralized around Joaquin Phoenix’s character Freddie Quell, and he provides the emotional core of the film. Whether or not his experiences in WWII are entirely to blame, Quell is a psychologically broken man, fighting constantly between his momentary urges and his deeper desires. 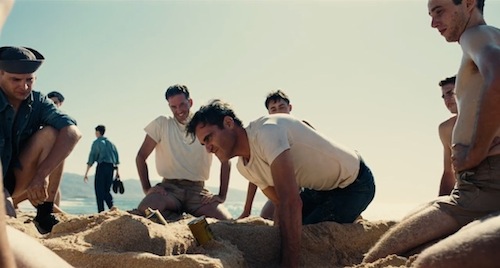 In almost every scene of the film, we can see Quell having this inner battle. He is not totally lacking in self-awareness either, which is where the tragic dimension of his character is born. In the opening set of scenes, set at the tail end of the war in the Pacific, we witness Quell behaving in absolutely bizarre ways. Before hacking open a coconut he seems to consider chopping his own hand off. He masturbates on the beach without a care for all the people walking around. Perhaps most interestingly, and the moment exemplifying his self-awareness, is when he mocks having sex with the sand sculpture of a woman, at first to the amusement of the men around him, but then he goes on far too long. In that moment he is living out his urges, consumed entirely by his sexual impulses, even with the mere sculpture of a woman, and a crude one at that. At the end of it he comes to his senses. He seems to see the urge that has taken over him and becomes ashamed of it, and so he walks away.

As Quell is placed back into non-military society, his impulses become wilder and this ability to back off erodes slightly. At his job as a portrait photographer in a department store, we see Quell’s true desires revealing themselves. As he takes the portrait of a man he asks, “Are you married?” This leads to a bit of an unmasking for the character when his resentment for this married man bursts out in an unprovoked altercation. Quell’s urges take over violently, but they are a reflection of a buried desire to be married and perhaps be like one of the “normal” people he photographs for a living.

More happens to Quell, including accusations of poisoning an elderly field worker. This is all prologue to Quell meeting Philip Seymour Hoffman’s entrancing cult leader character, Lancaster Dodd. Through this fascinating relationship between the two men we begin to see Quell confront his own urges in favor of achieving his true desires.

There are three crucial scenes or sequences that have informed my understanding of the film’s exploration of Quell’s desires and his need to overcome simple urges. The first is the First Processing sequence nearly forty minutes into the film. In it, Dodd gets Quell to answer a series of questions as fast as possible and without blinking. The questions range from “do you linger at bus stations for pleasure” to “do your past failures bother you” to “have you ever had intercourse with someone inside your family?” 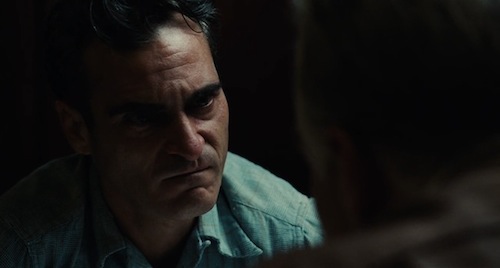 The scene is enthralling in any number of ways, not the least of which is in the way Dodd uses psychological techniques to extract honesty from Quell by appealing to impulse. Things take on another layer of importance, though, with the following exchange:

Dodd: If you were locked in a room for the rest of your life who would be there with you?

Dodd: Who is Doris?

Quell: Best girl I ever met and the girl I’m gonna marry one day.

Dodd: Is she in Lynn?

Dodd: Why aren’t you with that lovely girl?

Dodd: Do you love Doris?

Dodd: Is she the love of your life?

Dodd: Yes you do. Tell me why you’re not with her if you love her so much?

Quell: I told her I’d come back and I never went back and now I just– I gotta get back to her.

This is the first time we’ve seen so deep an inner life in Quell. We get a sense not just of his history and character, but of his clear desire for a normalcy he cannot bring himself to attain. He’s in love with a girl, but he didn’t go back to her. The reason is essentially irrelevant because it’s also irrational. The truth of the matter is Freddie Quell is a broken human being whose desires for true love are impeded by his uncontainable impulses as well as his understanding that these impulses would be destructive. He’s not a man who came back from the war only to take out his psychological trauma on his wife, but only because he couldn’t bring himself to go back to Doris in the first place. 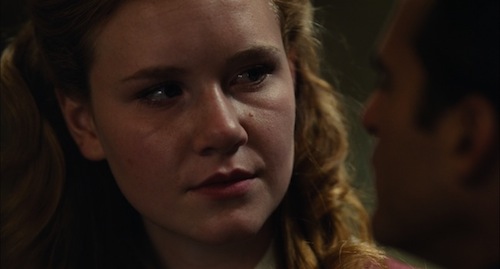 Following this, we see a series of flashbacks, though it’s not entirely clear that’s what they are. There is a dreamlike quality to these scenes that gives a feeling not of objective memories, but of Quell’s impression of his memories and his own relation to them. In at least a couple moments, particularly the scene on the bench, it almost plays as though he is his current post-war self, interacting with an idealized memory of Doris. In effect, Quell is talking to himself and to the embodiment of his desires. Later scenes in the film add to its impressionistic quality, as does the dissonance brought by Phoenix’s aged and weathered appearance next to the youthful, 16-year old Doris, as played by Madisen Beaty.

So we know that Quell does have genuine desires. He is not made purely of impulse so much as he can’t help but be controlled by impulse. His relationship with Dodd is then built upon a symbiosis in which Dodd attempts to prove his pseudo-scientific theories through taming Quell, and Quell adopts Dodd as the main authority figure in his life who presents a path to that normalcy. His instincts at first are defined by urges—primarily the urge to please Dodd. A seed is planted, though, in one absolutely crucial scene.

After the now infamous sink scene, Lancaster’s wife, Peggy, wakes Quell up in the middle of the night to tell him something.

Peggy: Now it’s there waiting for you, and you can go and get it whenever you’re ready.

It’s a strange passage, provoked in large part by Peggy’s concerns about Quell’s effect on her husband. It’s not clear that what she tells Quell comes out of any genuine caring for him, but it’s important nonetheless because the message stands in stark contrast to Dodd’s more authoritative approach. Taming Quell’s urges is one thing, but of what use is it if it turns him into nothing but a submissive with no purpose? Dodd speaks constantly of humans needing to distance themselves from animalistic tendencies and urges, but all that processing only turns Quell into a tamed, obedient dog rather than fully rounded human being. 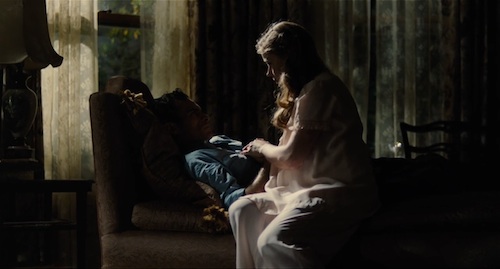 Peggy’s words give Quell a true goal. Where Dodd had only uncovered Quell’s deepest desire, his wife makes that desire into something attainable. Furthermore, she makes it something realistic. There’s no flat encouragement to go get what he wants. It’s as simple and reasonable as going for it when he finally feels ready to do it. No timetable. No pressure. Just a point in the future to look forward to.

That point is finally realized in a scene later in the film. Before that, though, we see the release of Lancaster Dodd’s second book, and with it the disillusionment of some of Dodd’s followers. It’s not clear whether Quell feels the same disillusionment on an intellectual level, but his demeanor suggests he is losing faith in Dodd’s teachings, though the taming techniques have apparently had a great effect. The one moment he gives into impulse, severely beating Dodd’s publisher who has just insulted the new book, still displays a degree of calm manner. Quell doesn’t go wild, even though he’s using violence to “protect” Dodd. He is now a changed man, more in control of his impulses. He is now ready.

The crucial next scene, set in the desert, features Dodd playing a kind of game on a motorcycle. “You pick a point, drive straight at it, as fast as you can.” Though it’s just another of Dodd’s games, it recalls Peggy’s words to Quell. Dodd drives off, elated, enjoying the ride. He comes back and gives the motorcycle to Quell who drives off in the opposite direction, faster and more determined. This is when he finally leaves Dodd, presumably to go get what he so desires.

The next set of scenes sees Quell going back to Lynn to see Doris, only it’s been too many years and Doris has gone off and married another man. Quell took a long time to bring himself to a state of repair, but the things he desired did not wait for him. He then has a dream telling him to go see Dodd, who is now in England. When he gets there, Dodd presents him with a binary choice: either join The Cause in full or never see each other again. An air of tragedy hangs over this ultimatium, but Quell at least chooses his own path, deciding to leave Dodd. 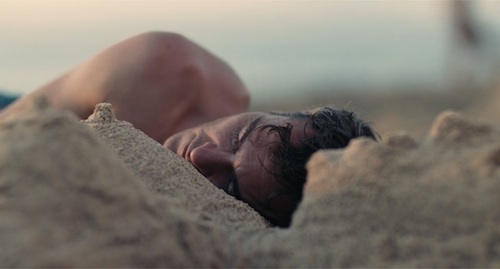 The final scene, in which Quell is having sex with an English girl—the first time we see him actually manage to consummate a sexual impulse—and jokingly using the processing techniques he learned from Dodd, shows how far he has come. Though his position in the world is not entirely improved, and though he is still in many ways a broken man, he now has the tools to control his impulses and not be guided by them. He finally has agency, and though his specific desire to marry Doris cannot be met, he is now in a place to find new loves and new desires. The final image of the film, Quell resting his head on the bosom of the sand woman, shows a man at peace with his urges. They still exist, and they still define him in a way, but they no longer control him, freeing him to once again put something for himself in the future that he wants. And now he truly is ready to go get it.