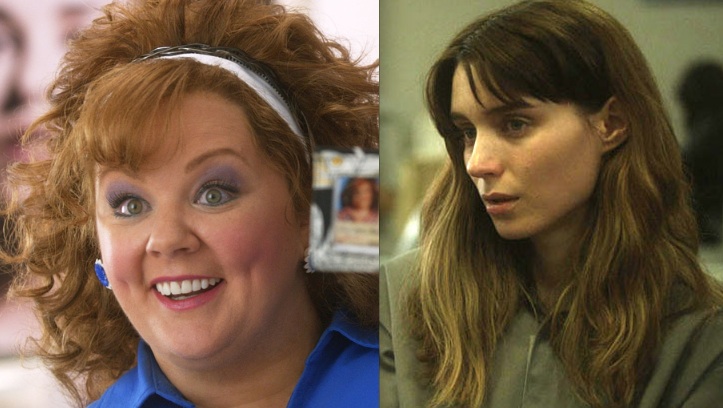 “Two high-concept roads diverged in an AMC
And sorry I had to travel both.” – Robert Frost, 2/8/13

Identity Thief, the newest magnum opus by Seth Gordon, and Side Effects, the grandest of finales by Steven Soderbergh, are cut from the exact same cloth. They are high concept genre exercises, both as ludicrous as can be. They root these concepts in contemporary “issues” in an attempt to elevate their basic goals. Identity Thief takes our current desperation due to economic turmoil and aims for laughs. Side Effects takes our current blind trust in medication and pharmaceutical companies and aims for thrills. Neither film truly works, as languid pacing prevails and talented people are generally wasted. However, Seth Gordon has a predilection for the broad, while Steven Soderbergh has a predisposition to go for the brain. Therein lies the debate: is it more offensive to watch a stupid film embrace stupidity… or to watch a stupid film so desperately pretend to be smart? Admittedly, Identity Thief had me angry at myself while sitting in the theater, but Side Effects inspired miles more frustration upon leaving. What a lovely weekend at the multiplex: a comedy with few laughs, a thriller with no thrills, and a grouchy man trying to determine which bad experience was worse.

Sandy Patterson (Jason Bateman, forever playing Bland Uptight Protagonist Everyman Losing Patience) is a finance expert who gives his social security number to an unknown caller on the phone when they ask for it, letting you know immediately the caliber of set-up you’re getting here. Turns out a woman named Diana (Melissa McCarthy) has stolen his identity, and she is using his money to buy drinks for a bar, because she has no friends… excuse me while I grab a Kleenex. The police in Denver, where Sandy lives, keep interfering with his life because Diana keeps doing bad things under his name. Naturally, they can’t help him clear his name, so he goes to Orlando himself to grab her and bring her to justice. He discovers upon arrival that she owes money to a man named Paolo (Jonathan Banks, utterly wasted), so his cronies (Genesis Rodriguez and Tip ‘T.I.’ Harris, also wasted) are after her. Also after her: a bounty hunter (Robert Patrick, also wasted) with a real personality disorder. Meanwhile, Sandy and Diana become (shockingly!) friends on their car ride to Denver.

It’s an exact replica of Midnight Run, except the hero is a perfect goody two-shoes and the object of everyone’s attention is reprehensible past the point of redemption. So, you know, it’s like Midnight Run while at the same time completely missing what makes Midnight Run work.

Melissa McCarthy deserves better. When the movie isn’t forcing her to behave in a “wacky” manner, she is enormously appealing. Once Diana loses the goofy hair and goofy outfit she adorns for the first half of the film– because it’s difficult for audiences to tell when someone’s weird without brightly colored visual identifiers– she becomes interesting. She has the natural appeal of a female John Candy, forever earnest and winning. It’s too late to save the film, but there are a few scenes in which Bateman and McCarthy merely talk without cracking constant dick and fuck jokes, and those scenes have an easygoing chemistry. There are too many awkward tonal shifts in which we see McCarthy do something awful and frantic for ten minutes, but then she cries in the corner, so we’re supposed to care about her– a tactic Todd Phillips employed for Zach Galifianakis in the horrendous Due Date, and it didn’t work there either. A few one-liners stick here and there, and generally the formula prevails (I’d be surprised if this film isn’t a hit with the general public) but the film simply is trying too hard to deliver big laughs, and the stench of desperation affects the entire product.

Meanwhile, in Side Effects, Soderbergh isn’t trying hard enough to create thrills. During a laborious forty-five minute set-up sequence, we learn Emily (Rooney Mara, forever playing Troubled Young Woman With a Dark Sexuality) is battling with depression. Her husband, Martin (Channing Tatum), just returned from four years in prison for insider trading, and Emily is struggling with their new life. Her doctor (Jude Law) prescribed Zoloft, but when that and other meds don’t work, he consults with her previous shrink (Catherine Zeta-Jones). She recommends a new drug on the market called Ablixa. Some time later, when Emily commits a murder while in a drug-induced sleepwalking session, her doctor’s medical recommendations come into question. Why did he insist she stay on this new drug? Was he properly keeping tabs on her progress? Did he treat her differently because she’s a beautiful young woman? As the doctor’s life starts to quickly (or for the audience, arduously) crumble around him, he suddenly is introduced to a detail or two that shows him things… wait for it… are not all that they appear to be.

Unfortunately, the film cheats. I don’t mean that it hides pertinent information from us until closer to the end, that’s to be expected in any goofy thriller. I mean that Soderbergh intentionally misleads us in order to vainly conceal the most obvious twist imaginable. He shows you the murder scene, not from a character’s perspective, but as it happened… or so you’re led to believe. However, later, when we see the murder scene again and details have significantly changed from the first time you saw it, you are likely to toss your hands into the air in frustration as I did. When the movie then spirals out into the most far-fetched set of scenarios imaginable, including double-crosses, triple-crosses, characters knowing things they couldn’t possibly know, and characters plotting out precisely how countless people would behave years in advance, you realize that this movie isn’t nearly as smart as it wants to be. It’s the dunce wearing a valedictorian robe.

While the performances are all fine, I couldn’t help but wonder if this film could’ve been better with a director that embraced the script’s high concept and focused on the suspense, the thrills, or maybe even the fun that a good con artist film can provide. The only genre element that seems to belong is Thomas Newman’s unsettling score, packed to the brim with bass rumbles and high-octave melodies… yet even that feels out of place slathered over Soderbergh’s cold cinematography and Scott Z. Burns’ talk-heavy script. It reminds me of Contagion, also directed by Soderbergh and written by Burns, a film that takes a typical high concept idea and aims for a smarter, slower-paced execution. However, Contagion revolved exclusively around “The Topical Issue,” whereas Side Effects is burdened with the need to focus on its schlocky plot.

I love thrillers. I love schlocky plots. I even love Side Effects‘ awesome tagline: “In Some Instances, Death May Occur.” Yet I love most of all when my schlocky thrillers don’t pretend to be smarter than they actually are. The movie unsurprisingly gets better the crazier it becomes, and in the last twenty minutes it approaches fun, reveling in its legitimately bonkers nonsense. Yet when you step out of the theater, you realize that seventy-five minutes of slowly paced feigned intelligence followed by twenty minutes of cuckoo mayhem does not a good film make. I wonder if the film would’ve been met with the same cinephile accolades were it not released with this particular director’s name attached.

So then the question remains: is it better when a film embraces its lowest common denominator status and aims to please? Or is it better when a film pretends to convince you through deliberate manipulation and thoughtful stylistic tactics that it’s somehow worthy of higher merit? Certainly this question came up at the end of 2012, when several Worst Of lists named the ambitious Cloud Atlas as “The Year’s Worst Film.” I wonder if effort deserves points above those slumming it, or whether those who swing hard for the fences strike out in an even more spectacular fashion than those trying to bunt. There’s no clear winner to this debate, but when two films inspire such annoyance in one weekend, the loser certainly seems to be us.