“How to Train Your Dragon 2” Gives A Franchise Wings

You may find yourself in a state of stunned, blinking confusion as How to Train Your Dragon 2 begins its end-credits scrawl. Sequels aren’t supposed to be this good; they are, according to conventional wisdom, supposed to be soulless cash-ins, all the better for us jaded cynics to noisily opine about the creative superiority of the original. Here, though, director and animator Dean DeBlois defies audience preconceptions about follow-ups and franchises by out-and-out surpassing 2010’s How to Train Your Dragon in ambition, craft, and imagination all at once. DeBlois has no interest in a game of plug and play with the qualities that made the previous film a hit. He’s out to build upon them.

He could have pulled off his little hat-trick in his sleep, too, but he doesn’t, and competing animators will likely be grateful to him for extending them that courtesy. How to Train Your Dragon 2 is a movie of intent, one where every ounce of thought and exertion put into the filmmaking process is present on the screen. It’s a film that actively tries to be more than just the second entry in a commercially viable children’s series, striving for something greater than easy revenue from the box office and the ancillary market. Remarkably, it succeeds, thanks in no small part to the expressive clarity of animation brought to bear by DeBlois and his team. This isn’t product that deserves a trophy just for showing up; it’s a high water mark for DreamWorks and a huge accomplishment for DeBlois.

How to Train Your Dragon 2 picks up 5 years after the events of the first picture, in which time the coastal Viking village of Berk has gotten downright draconic. No longer living in fear of the winged fantastical beasts of the title, the Norsefolk now keep them as pets, engaging in comically delightful racing games involving sheep. But all isn’t totally well for our hero, Hiccup (Jay Baruchel), even more of a teenager now than before and in possession of a serious case of wanderlust: the kid just can’t sit still, flying off on expeditionary excursions with his best friend, the dragon Toothless, to chart new territories and figure out what he’s missing from life.

Hiccup’s travels end up being the catalyst for the film’s plot. It turns out there’s a big world to discover, and most of its occupants still have a backwards view on dragons. Before long, Hiccup’s meanderings draw the unwanted attentions of dragon trappers (including Kit Harrington’s swashbuckling man-candy, Eret) led by a madman named Drago Bludvist (Djimon Hounsou); they also reunite the lad with his mother, Valka (Cate Blanchett), long thought to be dead but actually alive and coexisting with dragons in their natural environs, learning about their behavior and habits. She’s the Jane Goodall of mythical creatures. 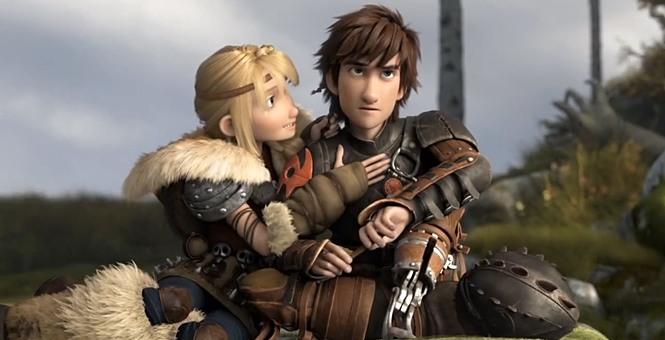 That’s a nutshell summary, but DeBlois takes How to Train Your Dragon 2 in numerous directions at once. The film plays like a series of micro-narratives, almost to the point where each thread threatens to become disparate from the others. DeBlois, however, finds balance, or rather enforces it, harmonizing the many moving parts of his picture by the end of the second act, which is capped by some of the best high-flying spectacle you’ll see in a theater all summer long. Here there be dragons, and more than you can shake a season of Game of Thrones at; they come in innumerable shapes and sizes, some pint-sized, and some that nearly rival 2014’s other major, revived, big-screen monster for sheer girth.

DeBlois isn’t a fool – he knows what made How to Train Your Dragon work. He also knows that sequels must out-scale their sires to distinguish themselves. Most importantly, though, he knows that “more” is only more when the nuts and bolts that provide a stage for blockbusting are given priority. How to Train Your Dragon 2 founds itself on character, taking its cast on transformational journeys that unfold in between setpieces and punchlines. (As thrilling as it is, the film is also raucously funny, particularly for anybody with a soft spot for cute animal memes.) There are stakes in play here, people worth caring about and getting invested in; DeBlois takes Hiccup and his family to dark places, and when tragedy cuts home, we feel it as surely as they do.