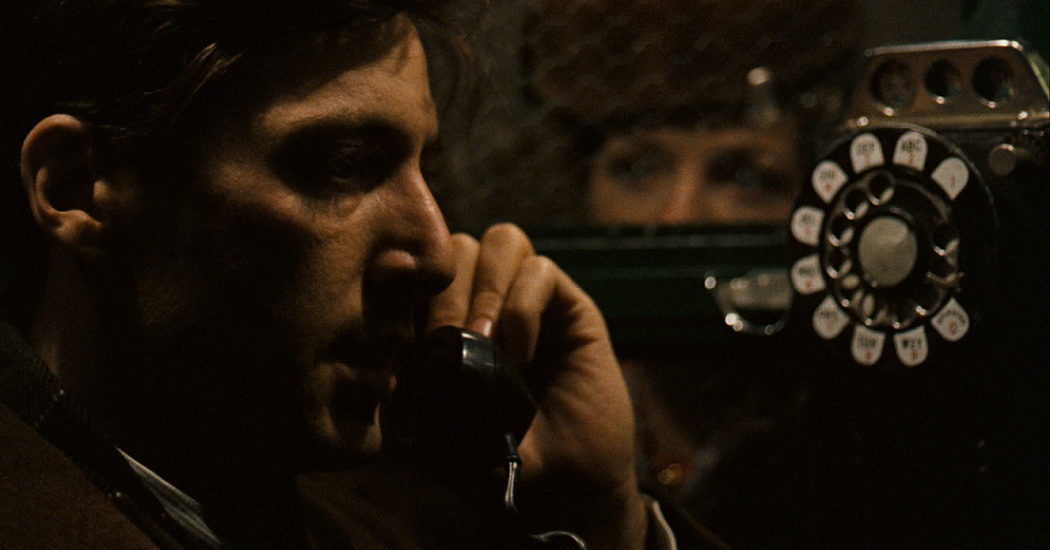 Editor’s note: The Godfather and The Godfather Part II are two of the 10 best films of the 1970s voted on by staff, friends, and readers of Movie Mezzanine. For the sake of surprise, we’ll wait to reveal where this and every other film ranks on the list until the very end. We hope you enjoy.

Few people could have anticipated during the course of adapting Mario Puzo’s best-seller The Godfather to the big screen that it would become a lasting legacy in cinema. Forty-plus years have passed since its theatrical release, yet it stands the test of time as not only one of the greatest depictions of a crime family, but as one of the best films ever made.

The audience is introduced to the Corleone family during the wedding of patriarch Vito’s only daughter. We learn something about the family members as each vignette coalesces into a portrait of organized crime. Francis Ford Coppola chronicles the ins-and-outs of the organized crime business, from Vito’s fair-handed rule over his territory to Michael’s cruel, calculating and lasting reign over New York City and eventually Nevada. When Vito bare survives an attempt on his life, the family quickly seeks to fill the power vacuum left by his absence.

The image above, in which Michael first hears of his father’s attempted murder, captures the beginning of his moral descent. He answers the phone a war hero reluctant to take part of the Corleone dynasty, but he hangs up the de facto clan leader, launching a campaign of bloody revenge. Sonny (James Caan) and Fredo (John Cazale) both vie for the title of Don, but Michael (Al Pacino) is the one who avenges his father killing Sollozo and Cpt McCluskey before fleeing to Sicily. Sonny takes over, but Michael’s absence does not last long. Sonny’s time as Don is quickly ended in a hail of gunfire, and Fredo is too simple-minded to hold any real power. Michael Corleone thought he could take over the family business without losing his soul, but he was wrong.

When writing about The Godfather it’s impossible to ignore its subsequent sequel, which could have coasted off of its predecessor, but instead enriches everything that came before. The Godfather Part II delves into the background of Vito’s rise to power, establishing the foundations of the family’s bribery, theft, corruption and murder. Meanwhile, Michael Corleone is a shell of his former self.

The film spans decades between young Vito (Robert DeNiro) climbing the socio-economic ladder of New York City and Michael seeking a way to legitimize the family in Nevada. As each move is made to push the Corleone name into the neon-lit streets of Las Vegas, Michael is stymied at every turn by Miami boss Hyman Roth. Later on, we learn of an intimate betrayal that seals Michael’s spiral into evil and cements Part II as an equal successor to Coppola’s original.

Any question of whether these two films romanticize gangsterism is put to rest with the subtlety of a gun shot to the head. Michael’s choices at the end of the film are haunting in their cold-blooded rationale. Paranoia has eaten away the humanity that made him so reluctant to come back home in The Godfather. Vito dies with regret in that tomato patch playing with his grandson, but no tears are shed for Michael in his complex at Lake Tahoe. His “business transactions” left him without a brother, and his rage drove away his wife and children.

Few images captured on celluloid are quite as horrifying as the look on Michael’s face as Kay (Diane Keaton) explains what happened to her third pregnancy. His expression of conviction, anger, and potential combustion perfectly summarizes Al Pacino’s layered portrayal of the most complicated mobster put to film. It may be hard to watch, but it’s undoubtedly one of the biggest reasons the Godfather saga has such lasting impact.

During the depression, America fell in love with gangsters, the fast cars they drove and the gorgeous women draped over their arms. Francis Ford Coppola and Mario Puzo destroyed that romantic glow gangster films had with each car-bomb, shooting, stabbing and heinous crime committed. Moviegoers rooted for villains like James Cagney in White Heat and Angels with Dirty Faces, but Al Pacino’s performance as Michael Corleone goes far darker places. His gangster doesn’t inspire cheers, it shakes viewers to their core.

Coppola doesn’t waste a single frame of celluloid in telling the story of the Corleone family. Every scene illuminates the motivations behind each character and dilemma within the family and all the people that surround it. Audiences don’t identify with the Corleones because they are good people – they clearly aren’t. The draw is in sitting with them around the dinner table as they plot. We’re with them through it all, and if there’s anything this family demands, it’s our respect and loyalty.

What truly marks The Godfather and The Godfather Part II as immortal classics is the following they have built over 40 years. This series doesn’t just have fans, it has inspired dialogue that has infiltrated the global lexicon. Entire philosophies have been derived from the many quotable lines in the picture–I’ve even had people tell me that everything important in life can be taught by the film.

“Keep your friends close, but your enemies closer.”

“A man who doesn’t spend time with his family can never be a real man.”

“Never hate your enemies. It affects your judgement.”

The Godfather sits at #3 on AFI’s 100 Greatest American Movies of All Time, and both films reside near the top of IMDb’s Top 250 Films.  That lasting popularity isn’t a fluke; the Godfather films stand the test of time because these aren’t just movies, they’re cultural touchstones.