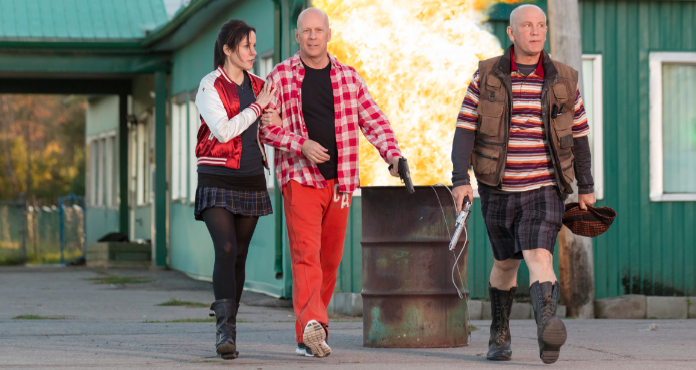 Having A Goofy Old Time with ‘Red 2’

There’s a devil-may-care quality to Red 2 that makes for fun summer entertainment. I would be tempted to describe it as ‘breezy’, but it’s too feeble even for that. It’s really nothing but a bunch of scenes on a preposterous string, rattled and flung into the air for excitement, as well as featuring a roster of actors who make the joint worth visiting in the first place. Had it not been for its casting, I cannot imagine anyone sitting through all the silly, globe-hopping twists and turns the script has to offer.

The basic idea, just like in the first Red, is to get a group of old pros at the spying-and-killing game and make us laugh at how effective they are at what they spent their lifetimes doing. Their craft comes effortlessly to them, which makes the whole movie feel like a showcase for dueling virtuosos. Bruce Willis, John Malkovich, Helen Mirren, Catherine Zeta-Jones and Anthony Hopkins (as well as the relative newbie Mary Louise Parker) know how to play off each other and director Dean Parisot doesn’t come in their way. The movie is about teamwork of spies and contract killers, but its real theme is its cast – the craft and the history each of its member carries.

The plot is a matzo ball of Cold War WMD nonsense that revolves around a bomb with vials of what looks like cherry Kool-Aid (signifying danger). Everything about the story is an excuse for comedic touches: the Kremiln business allows Mary Louise Parker don a military suit and goof around with a line of Russian dialogue; Paris provides a natural habitat for an evil wine snob played by David Thewils; the final setting of Caracas is upstaged by John Malkovich in a full Carmen Miranda attire – and so forth. Even the bit players and supporting actors are top-notch, with Neal McDonough standing out as a baddie whose eyes are so blue they look like electric ice cubes ready to stun-gun you into submission.

The body count is high, and lives are being disposed of in a carefree manner that may shock some viewers. Still, much of the carnage can be played for high comedy, as in a scene in which Helen Mirren is having a phone conversation while casually dissolving a corpse in her bathtub. Any movie that indulges in national stereotypes as much as this one is bound to raise the issue of political correctness, especially in the scenes involving a raid on an Iranian embassy.  Still, if you’re willing to play along, there’s genuinely funny stuff here, like Mirren informing Parker that she got a couple of corpses needed for a cover-up “from her freezer”, or Brian Cox playing a raunchy Russian agent who has the hots for icy Mirren and sniffs her shoes in total bliss.

I don’t want to praise the movie too much – even at its very best, it’s still just OK entertainment – but there’s a welcome touch of something old-fashioned about it; something that makes me think of it as a “real” movie, not as another product or stillborn incarnation of a franchise. Its belief in gathering an excellent cast in hope of having fun makes it a distant relative to all-star extravaganzas like Ziegfeld Follies and – disastrous as it was – It’s a Mad Mad Mad Mad World. I won’t remember much of Red 2 a year from now, but some things will linger – like that insanely huge smile taking over Mary Louise Parker’s face when she’s about to get into mischief. Her chemistry with Bruce Willis – who creates a real character here, just like the rest of the ensemble – is at the heart of Red 2. The movie says nothing spices up a relationship like saving the world from a mad scientist together. It’s a lesson the movies have been teaching us – albeit on a smaller scale – at least since the days of Nick and Nora. When do we finally stop and listen…?