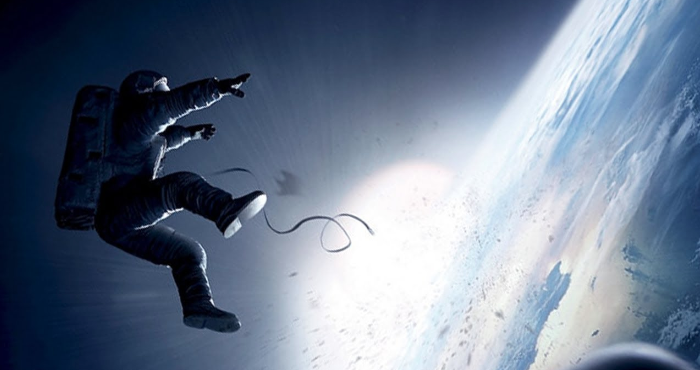 ‘Gravity’: Alfonso Cuarón’s Return to Filmmaking Is Unimpressive and Regressive

This review was apart of our coverage of the Toronto International Film Festival.

Earth looms so large in the opening scene of Gravity that it takes a few moments to realize a small white dot on the edge of the frame is actually a space shuttle. The shot displays a grasp of scale for the vastness of space often lost in science fiction films, and it perfectly sets up the atmosphere for the film to follow, in which two astronauts, Matt Kowalsky (George Clooney) and Ryan Stone (Sandra Bullock), find themselves stranded in lower orbit after a disaster sends satellite debris into their ship. In space, a distance of 100km can be traversed in mere minutes, but the same speed that allows the characters to cover great gulfs to reach their next hope for survival also makes it so much easier to miss their mark and float off into oblivion.

These opening moments, devoid of space trash flechette and the threat of dwindling oxygen, are as genuinely suspenseful as Gravity ever gets. Soon after, the film enters into a series of intensely complicated long takes filled with crumpling space stations, whipping tethers and spinning bodies, a continuation of the boastful long takes of Children of Men. Yet the extended sequences of Gravity seem altogether less impressive than Alfonso Cuarón’s earlier work, the product of programming rather than blocking, and even the dance-like early shot that winds around the space shuttle as the crew repairs the Hubble telescope has such an emptiness to it that one is only primed for a hollow spectacle.

And what a trifle it is. Gravity occasionally hints at being the film it is being sold as, a bleak confrontation with death set only to the sounds of the characters’ increasingly shallow breaths as their tanks run empty. For the most part, however, it plays as a digital-age update of Apollo 13, an unflappably optimistic, relentlessly plot-driven exercise that ticks off each stage of the characters’ desperate plans for safe re-entry as its own setpiece, with camera movements and transparently fake CGI that turns each stage into its own video game level.

Indeed, first-person shots that include rendered hands waving awkwardly into frame have the look of a zero-g mod of Mirror’s Edge. The basic rundown of each of Gravity’s major moments: floating precipitously with the threat of depleted air, grasping at the surface of some space vessel, missing, panicking, then successfully grabbing onto another surface. Repeat ad infinitum, changing out only the type of craft the characters attempt to reach as they search for something that can send them home. 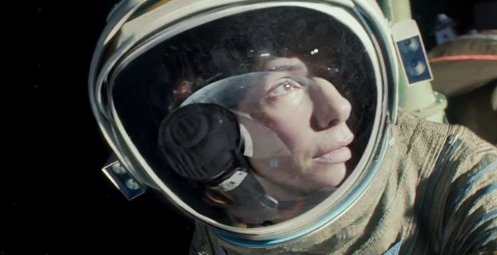 To break up this forward motion, Cuarón and his son Jonás include such awkward monologues to fill in back story, that the script feels like a parody of bad exposition. Kowalsky loves to tell stories of lost love that he has badgered everyone with time and again, and when Stone’s air starts to run low, he contradicts his own instructions for her to conserve her breath by making her talk about her own past, which bluntly segues into talk of a lost child.

None of these moments allows a character to develop so much as hit the same dutiful marks of progression that mark the narrative’s movement. The actors spend so much time being digitized and omitted through first-person shots and whatever moments replace them with computer imagery that the dialogue seems to work to erase what little of their human presence remains on-screen.

This is hardly even a film; it’s more like the prologue of another science fiction film laboriously stretched out to feature length, or the intro to the film’s subsequent theme park ride. Children of Men, in retrospect, was a load of dazzling technical feats in service to a film that only engaged its myriad ideas on a surface level, but Gravity lacks even the sheen of thematic depth that graced Cuarón’s last film. It’s no different than Apollo 13, really, save for better digital effects that have ironically only made the distinction between reality and false imagery all the more visible.

And there’s something irritating about the manner in which the film treats Bullock’s character, someone qualified by NASA to go into space but written to be a specialist whose skill set is perfectly unsuited to the task of survival in space. It allows her character to be smart, yet utterly beholden to a man’s instructions, one of many reminders that for all the complicated CG wizardry and ostensibly visionary gloss of Gravity, it is aesthetically and structurally regressive, a film different from its thematic predecessors only in how good the effects technology is.

5 thoughts on “‘Gravity’: Alfonso Cuarón’s Return to Filmmaking Is Unimpressive and Regressive”