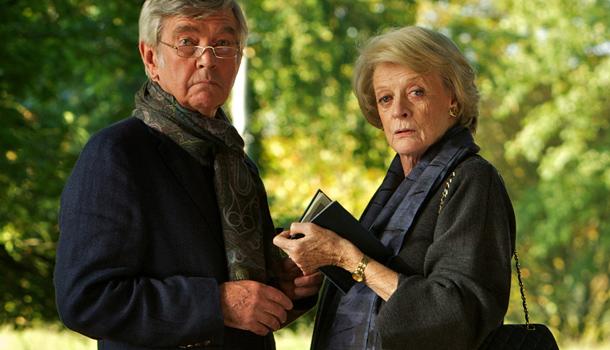 It must be a rude awakening for an actor when you start receiving offers to play victims of senility. With the baby-boomers creeping into their fifties and sixties, retirees are one of the biggest growing demographics at the box-office, and theatres need films, and film stars, that this expanding audience can relate to. Even so, you have wonder if someone like Billy Connelly is forced to take stock of his life before accepting a role in something like Quartet, a film about four aging opera singers performing in concert to save their nursing home from bankruptcy. Sunny, bland and almost entirely undramatic, the film may well prove a success amongst its intended audience. But if you’re too young to remember the gramophone, you should probably give it a miss.

Penned by Ronald Harwood from his play of the same named, the film marks the directorial debut of actor Dustin Hoffman, and tells the story of the residents of Beecham house, an aged-care facility for gifted British musicians that’s apparently held solely afloat by the annual gala concert organised by the conceited theatre director and resident Cedric Livingstone (Michael Gambon). Amongst his star performers are three quarters of a famous opera group – the bawdy Wilf (Connelly), the forgetful but good natured Cissy (Pauline Collins) and the easily exasperated Reg (Tom Courtenay). But the success of the concert is threatened by the arrival of Jean (Maggie Smith), Reg’s ex-wife, and the fourth and final member of their quartet.

Admittedly, I am a far cry from this movies’ target audience. But that doesn’t make it any less bad. More lethargically paced than even the slowest of its geriatric characters, the movie creeps along with all the dull, inoffensive inevitability of old age. The performances are fine, as you expect from veterans such as these, but there’s nothing you haven’t seen from them before. Their characters are similarly familiar, and condescendingly written to boot – Cissy dotters along with the all the amusing forgetfulness and pliability of a someone obviously suffering from dementia, while the nursing staff positively beam when on the receiving end of one of Wilf’s cringeworthy sexual advances (quick poll amongst female readers: how many of you actually enjoy being hit on by dirty old men?)

The central conflict between Reg and Jean, meanwhile, is woefully underdeveloped. Hoffman drags out the thoroughly uninteresting question as to what exactly split them apart, only to then dispel all feelings of animosity over the course of an afternoon stroll. As for the concert, while there’s an abundance of roadblocks for our heroes to hurdle (or shuffle around, as the case may be), you’ll never feel even the slightest amount of doubt as to whether the foursome will actual perform. Likewise, the subplot about Beecham’s potential closure, a feeble attempt to provide the film with some stakes, is wrapped up (or rather, dropped) with a single, throw-away line of dialogue.

Hoffman’s direction is a workmanlike – not awful or incompetent by any means, but almost entirely lacking in character. Why he chose this story for his directorial debut is baffling. The man’s not even British!