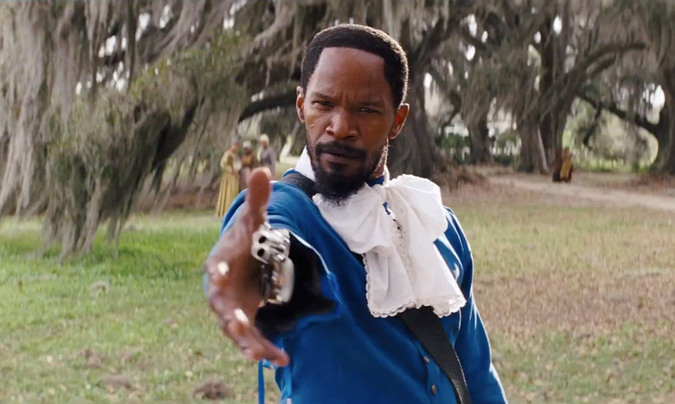 ‘Django Unchained’: The D Is The Only Thing That’s Silent

Quentin Tarantino’s latest, Django Unchained, contains some of the best filmmaking of the writer-director’s twenty-year career, with his ardent love of the spaghetti Western aesthetic finally given the material to fully blossom. There are, per Tarantino’s enthusiastic embrace of pastiche, abundant references to past films, with, notably, a big red (literally, in the opening titles) arrow pointing toward a cameo appearance by Franco Nero, star of Sergio Corbucci’s Django, from which the very title of the movie is taken.

The action sequences are flamboyantly staged, with each on-target gunshot producing geysers of blood, and the climactic shootout balances a precise, logistical attention to detail with a giddy, leap-off-the-cliff embrace of the random insanity inherent in a bunch of people wildly shooting guns at each other. It’s a high water mark for Tarantino as an action director, whose ability as a writer to will his characters into iconic status remains firmly in place. It’s a shame, then, that within the same film is some of the worst, most tone-deaf material he’s put on the screen yet.

In 1858 Texas, bounty hunter Dr. King Schultz (Christoph Waltz) seeks out a slave named Django (Jamie Foxx) who can identify three men Schultz is looking for. Django agrees, and after he assists Schultz, the good doctor reciprocates and joins in Django’s quest to rescue his wife from notorious and fearsome slavemaster Calvin Candie (Leonardo DiCaprio). As is customary with Tarantino, there is more to the movie than this basic plot; Django Unchained is about Westerns, and the way spaghetti Westerns commented on them with their outsider’s perspective. The historical and political commentary here is about slavery, which Tarantino portrays as brutal, evil, dehumanizing, and at times cartoonishly ridiculous.

That last is perhaps the greatest artistic risk Tarantino takes in Django Unchained. The plantation to which Schultz and Django track the three fugitive brothers whose warrants Schultz holds is overseen by a comic caricature named Big Daddy (Don Johnson), and takes place in a different stylistic dimension from the rest of the film, one whose iconography owes more to The Song of the South than to Sergio Corbucci or even William Witney. Tarantino’s intent is clear during the sequence at Big Daddy’s plantation, and the one that follows featuring a vengeance-minded Big Daddy and a spectacular gang of doofuses whose hoods and pig-ignorant racial attitudes strongly suggest a proto-Ku Klux Klan. The singular absurdity of this stretch of film is meant to heap, entirely through cinematic style, scorn upon the institution of slavery and the racial attitudes that supported it. 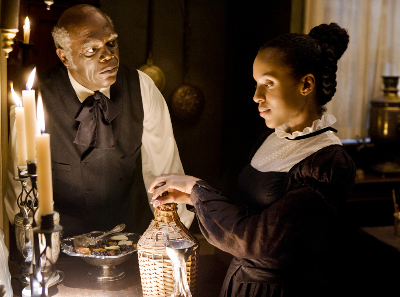 But while Tarantino the composer has written a fine piece of sheet music here, the music played is decidedly off-key: chastising a Tarantino movie for excess is a bit like rebuking water for being wet, and people who clutch their pearls over offensive language are annoying, but there is, to be blunt, only so many times one needs to hear the word “nigger.” There is no way to make Django Unchained without that word, as the film’s intent is to be a refutation of everything that led to the word’s existence, but the combination of the absolute surfeit of it in the Big Daddy sequence combined with the Uncle Remus-ness of plantation life at his abode—an oblique enough stylistic choice in its own right to require strict care in execution—leads to that very lengthy stretch sitting very badly, and upsetting the balance of the film in general. The intent of this bit of business is clear, but the execution is bizarrely inept, especially considering Tarantino’s usual flair for transgressive material.

Django Unchained regains more solid footing once Django and Schultz encounter Candie, and travel to his plantation, Candieland. We get a less (which is not to say “not”) stylized look at plantation life, with a fascinating power dynamic between Candie and elderly house slave Stephen (Samuel L. Jackson). The relationship between the two men, the lord of the manor and his faithful right hand who also served his father and his father before him, is eventually revealed to be that of an impotent despot perched precariously atop the throne and an ancient, viciously self-loathing aide de camp whose fierce loyalty is to the system of his own (literal) enslavement. The performances both DiCaprio (doing some of the finest work of his career) and Jackson (doing some of the most multi-layered and powerful of his own) give are absolutely mesmerizing, with DiCaprio’s fervently delivered, jaw-droppingly bizarre monologue about phrenology and the revelation of the extent of Jackson’s intelligence particular highlights. 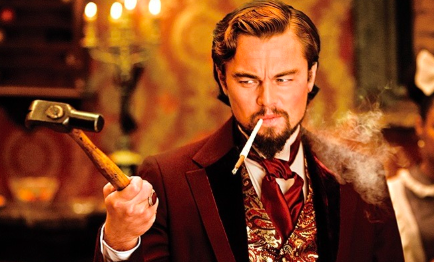 The rest of the cast, as is one of the finer delights of each new Tarantino picture, is nearly uniformly superb as well. Christoph Waltz is a verbose charmer, in the gloriously poetic sense of the former and the holistic, to-the-core sense of the latter, with one of his funniest moments coming when he ironically calls Jamie Foxx, initially near-mute, a “silver-tongued devil.” Foxx takes quite an interesting journey with the role of Django, whose progression from silent, taciturn prisoner to larger-than-life agent of vengeance feels natural, and who comports himself in sufficiently iconic fashion when it comes time to deal death to bad men. The actors given the task of carrying the overtly comic portion of the film stumble somewhat, with Don Johnson gamely attempting to transcend his clownish role and very nearly succeeding in that task, the blame for the impossibility of which is more Tarantino’s than his.

Although Django Unchained doesn’t entirely work as a film, and not to the degree Tarantino’s best work does, its weaknesses derive from the same source as its strengths, which is the same source as all of his work: his monumental, and guileless, love of cinema and its possibilities. Tarantino has the autodidact’s disregard for precedent in terms of what can and can’t be done; if he has an idea of something that he thinks would be cool in a movie, he simply does it. If that involves a tonally risky digression into a different kind of film for a major stretch of running time, so be it. If it involves running the risk of a condemnation of racism being mistaken for the thing itself, that risk will be run. Django Unchained never feels as though Tarantino is acting in bad faith (the only bad acting he does is in his unfortunate but thankfully brief turn as an Australian), as at its most tonally awkward his exuberant love for the medium still shines through.

With an array of fine performances, some lovely cinematography (care of Robert Richardson) in which many influences are saluted, and an ingenious, feverishly brilliant climactic shoot-out that ranks with the very best set pieces Tarantino has ever committed to film, Django Unchained really only feels like second-tier work because its director has reached such astronomical heights in his career. It is a messy yet rousing entertainment most directors would fight their way through a hail of gunfire to count as their own.