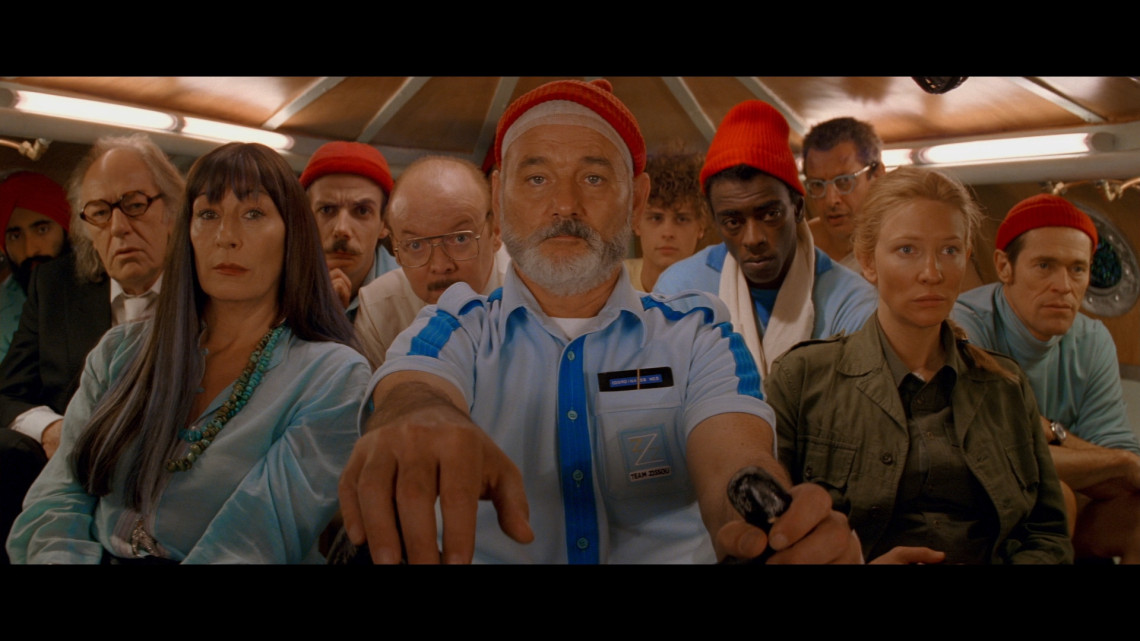 I first saw The Life Aquatic in late 2004, when it premiered at the Winifred Moore Auditorium as part of the Webster University Film series. The exhibitors had supplied the university with boxes of souvenir caps baring the film’s title and a distinctive traffic light.  Many in my social group of film students, including myself, wore those hats all winter, making our film shoots look like the work of the film’s own group of oceanic directors. But after the initial energy of that screening, or upon repeated viewings, the film’s flaws became glaring. It was visually stunning but structurally messy, made all the more disappointing by the still lingering glow of Anderson’s previous work. There were simply too many films in those days, all demanding their own degrees of time and appreciation, and there was little room for such imperfect art.

But the Wes Anderson of 2004 was a separate entity from the Wes Anderson of 2014. The director is still accused of over-rigid formalism and an ironic tonality that, for many viewers, compromises emotional connection. But, from Moonrise Kingdom Halloween costumes to handsome art books, Anderson has become a generational signifier. Together with cinematographer Robert Yeoman (who has photographed every one of the director’s live-action films), Anderson has established himself as essentially a brand. Theirs is a handmade arsenal of typewriter fonts and artisanal colors, the continued use of 35mm anamorphic widescreen film stock an analog comfort in an increasingly digitized era. As an old man in a sci-fi desert once said, these are elegant weapons from a more civilized age. These things have become part of the hard-to-define aesthetic of twee, hipsterdom and even steampunk. Anderson’s wood-grained interiors and brass enamel filigree coalesce into an unmistakable tonal aesthetic, one that simultaneously references a liminal past and defines the present.

But, in 2004, no one knew that yet. Wes Anderson had followed up a little-seen debut (Bottle Rocket) with two beloved successes (Rushmore and The Royal Tenenbaums), but had yet to prove himself capable of expanding past his comfort zone of carefully curated soundtracks and Bill Murray. Not long after, he would share an ad campaign for American Express with M. Night Shyamalan, who still seemed just one film away from a mid-career resurgence. David Gordon Green had released All the Real Girls the year before and seemed like the heir apparent to Terrence Malik. Mark and Michael Polish’s Northfork announced the arrival of a new auteur directing team of unfulfilled promise while Mean Girls warned us all to get ready for the movie star ascendance of Lindsey Lohan. Now Green’s work is uneven at best. Shyamalan is synonymous with artistic decline. The Polish brothers are barely remembered, and Lohan has gone the way of her own lesser angels. Subsequently, imagine telling someone in 2004 about the impending auteur emergence of Louis C.K. or that some kid on a Canadian teen soap opera wasn’t quite here yet, but was perhaps starting from the bottom. Films and performances might emerge as instant masterworks or disastrous failures, but those failures are all the more difficult to qualify when we don’t know the full shape of their creator’s careers.

But then comes what may still be Anderson’s single most effective sequence. Crammed into that same renamed submersible, Zissou at last encounters the shark. Cue the Sigur Ros music, the eight-foot stop-motion shark puppet, the look on Murray’s face as he delivers that final, stinging, “I hope he remembers me.” A dozen hands reach out to touch the old man’s shoulders in a brief moment of collective catharsis. It’s an individual three minutes that is perhaps better than the sum of the parts surrounding it, while simultaneously less significant than a quiet moment that comes a few scenes later. The last line of the film belongs to Zissou, sitting in silence outside the screening of his own redemption. “It’s an adventure,” he says to himself and no one else. It’s a sighing resignation that life just keeps on going.  Perhaps at the end of a more tightly constructed film it would be this line that we recall, instead of the complex production design and David Bowie songs sung in Portuguese. The Life Aquatic approaches Jeff Reichert’s description of Post Tenebras Lux as a “big bag of stuff,” all self-decapitations, cartoon devils and time paradoxes somehow creating a positive reaction in Reichert, one that he admits was far from universal amongst viewers. And though not nearly as inexplicable as Lux, The Life Aquatic is Anderson at his most stylistically self-indulgent. But it’s a fine line between ambition and excess, requiring a tight-rope walk to avoid what Reichert describes as “lobbing charges of indulgence and wandering on to the next film.” But just my film-school friends and I did in 2004, it is easy to wander away when a film sticks one foot in its mouth even as it dances an impressive one-footed mazurka with the other.  The perfect films aren’t where the challenge lies. And eventually you stop expecting every piece of art to be a flawless diamond of mimesis. Life reveals inevitable stretches of boredom or incongruity. Much as the attack on The Belafonte by pirates feels out of place, like an invasion from a different movie, life interrupts itself with jarring non sequiturs. The film’s ending originally struck me as gratuitous, a random veering off into tragedy. What purpose did the sudden death of Zissou’s son Ned serve this fanciful adventure story, coming so suddenly after father and son (biological or not) finally bonded? But sometimes our personal helicopters simply plummet into the ocean. As much as ‘live life to the fullest’ propaganda might lead us to expect, there is no way to go through life without the boring parts or the sadness. Not every moment is seized. We sit down in front of postcards and simply do not have anything to say. This is the space we step into as we board The Belafonte, with its crew of stray-dog mariners and broken equipment, perhaps saying, “Come fail with us.”

But then we go into that space that the movies exist to signify, the one of generational definition. The Life Aquatic reveals itself as moving at the same velocity as my own experience. We read essays written by people who loved films decades before we were born, about experiencing La Dolce Vita in the 1960s on a rainy night in London. We can watch the films that came before us, we can love them, but we weren’t there. They can’t extend beyond the screen and into biography. But there was The Life Aquatic when I was young. And here I am, still young, just marginally less so, and there is the film again. And there is the photograph of me in Berlin in December of 2006, awkwardly posing for my camera’s timer among the stones of the Holocaust memorial. I was still wearing the memento from that Life Aquatic screening. A week later I would return to America and lose that hat in the transition, along with most of the photographs I took. But I was there. If I ever forget, the films are there to remind me. A lot of people were there with me. I was even lucky enough to know some of them.