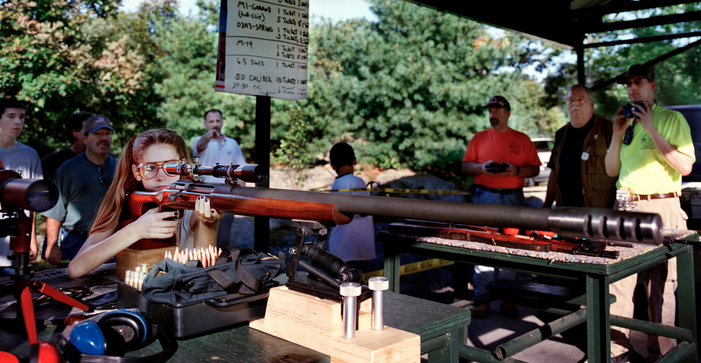 ‘A Girl and a Gun’ Is Not Nearly Enough (Sorry, Jean-Luc Godard)

Opening one week after Paul Feig’s The Heat – in which Mellissa McCarthy kept her refrigerator stacked with firearms that she ultimately shared to our delight with Sandra Bullock – Cathryne Czubek’s documentary A Girl and a Gun comes in handy as an introduction to its titular phenomenon. Just what is it that makes chicks with guns so damn appealing – at least to most heterosexual men on the planet? Is it the phallic enhancement of a sex that patriarchy sees as otherwise incomplete?

Such questions – and more – form the basis for an inquiry that is A Girl and a Gun. Taking its title from the famed Jean-Luc Godard quip about two basic ingredients that rubbed against each other to create a movie out of the blue, Czubek’s film surly does not suffer from scarcity of issues being raised. Shooting to kill is discussed alongside shooting for a thrill. An early sequence of shopping for a gun introduces the theme of firearms as a desirable commodity, while a chapter towards the end fully deals with the lethal potential of guns when we meet a women who fatally shot her (female) lover in the midst of a quarrel. It’s all here – and yet the whole film fizzes out without packing a wallop. A TV special on the subject would probably have comparable impact (that is, if we still could tell the difference between movies and TV these days).

The film manages to both present the gun-wielding women as attractively empowered, as well as remind us that for every girl with a gun there’s a potential girl (or boy) with a bullet in their head. That the film got released in the midst of post-acquittal controversy in the Zimmerman case, will only add to its box office. What’s missing from it, unfortunately, is a discernible personality behind the evidence we are presented with. The look of the film is pedestrian at best and dull at worst, pop culture references aren’t abundant or imaginative enough and the whole thing feels too emaciated and rushed.

The most potent point made by the movie – one that actually lingers with the viewer long after the credits roll – is that women are prey in a patriarchal society, and thus are targeted by default. Defense must come naturally to them, or else they’re in peril. One clip that could enhance this point, but is strangely absent, is the green-soaked night-vision finale of The Silence of the Lambs, in which Jodie Foster is at a total disadvantage in Buffalo Bill’s basement, and extends her gun into darkness as a feeler and only hope of survival. Of course, it’s not only women who can be preyed upon by raging psychopaths, but they are the only ones our culture would think of blaming for the harm they suffer from (“She was asking for it”), which makes Czubek’s point valid and well-argued.

One of the most subtle comments on the whole girl-plus-gun phenomenon came from no other than Quentin Tarantino, in the form of Jackie Brown. His best film to date opens with a scene of Sam Jackson and Robert De Niro watching a show called “Chicks with Guns” that has a bunch of bikini-clad bimbos firing away from their AK-47s and addressing their weapons on-camera with preposterous terms of endearment. As duly noted in Czubek’s film, images like that don’t signify any real empowerment – they’re explosive hard candy for the male gaze to cling to. It isn’t until Pam Grier – middle-aged, fully clothed, magnificent – holds up a gun that we get the thrill Godard had in mind.