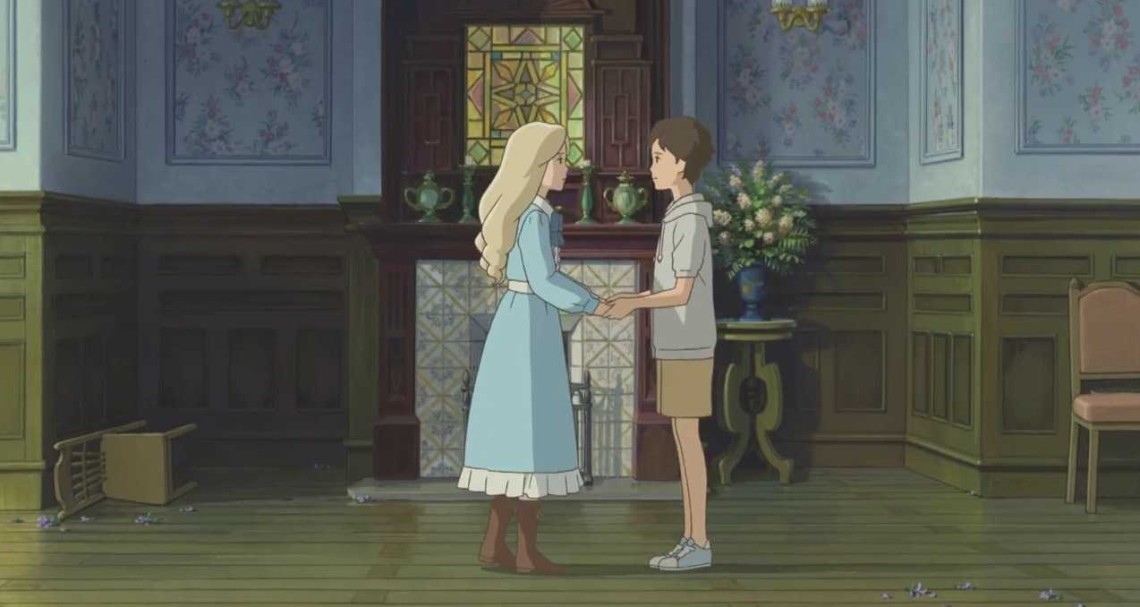 “When Marnie Was There”

When Marnie Was There may end up being the final work from Studio Ghibli. Hence, there’s a strong temptation for a critic to tie the movie’s themes and story with some sense of finality or closure. But as far as I know, no one making the film was aware of the studio’s impending “hiatus.” To them, it was just the latest project. Watching When Marnie Was There with that in mind, rather than burdening it with any expectations stemming from “this may be the end!!!” both makes more sense and is far kinder to the movie — especially since it’s just okay. Some have a tendency to label every Ghibli a masterpiece without much thought (we may see this intensify as people rush to eulogize them), but the studio made more than a few pictures that were nothing but adequate. Such is Marnie.

The eponymous character is an enigmatic figure, a preteen foreigner (it’s never stated where from) whose blonde hair and blue eyes make her stand out in her Japanese locale. Oh, she also stands out because she might be a ghost. That’s also important. Marnie becomes the fixation of Anna, a 12-year-old who’s spending the summer with her foster mother’s relatives in a small seaside town. The country air is meant to relieve Anna’s asthma, but there’s not much it can do for her prepubescent turmoil — her deep-seated insecurities and social awkwardness. Anna spots Marnie in the window of an old mansion that’s supposed to be abandoned, and soon, the two strike up a close friendship. Which is complicated by the fact that, again, Marnie is probably a ghost.

Many of the good qualities we’ve come to expect from Ghibli’s output are present and accounted for here. The art direction is impeccable, every detail working to spin together a lived-in world. The animation is flawless; these artists still make their characters “act” in a way few can hope to touch. It’s not just in the big emotions, either. The movie’s biggest laugh comes from the way a girl attempts to make a friendly gesture to Anna, only to freeze mid-movement and slowly recoil from her frosty reaction. It’s a basic gag, but the execution is a delight.

Raising and maintaining a mood is also old hat for the Ghibli pros. Marnie feels like a childhood summer. Everything from the insects buzzing in the sound mix to the colors painted into the sky gel with the film’s patient, wistful core. Especially toward the beginning, Anna’s struggles as an quietly introverted kid ring true.

But the more the movie sifts through the mystery around Marnie, the less interesting it gets. The supernatural element, which by its nature obfuscates what’s going on in the encounters (Is Anna hallucinating? Is Marnie a ghost? Is there time travel???), means their relationship is drawn from broad strokes and doesn’t really earn any of the emotion the film wants to wring from the audience. Then there’s the answer to the mystery (which is apparent for some time — the point at which it clicks depends on the viewer, but everyone will figure it out a while before Anna does) is both overly tidy and thematically hollow.

Spoilers now. Anna spends much of the story angsting over not having a place in the world; specifically, being an orphan and a foster child. It turns out that Marnie is in fact her grandmother. Learning this somehow heals Anna’s mind. It doesn’t make any sense. The plot itself is sound, save the massive coincidence of Anna’s foster relatives happening to live in the same area her grandmother did as a child. Rather, nothing in the course of these events actually serves to shepherd Anna’s changes. You can see where it’s supposed to happen. Read a synopsis and it has all the appearance of a sound story. But the actual beats and moments that would logically induce character development are missing. How Anna’s relationship with Marnie or delving into her past helps her is barely seen and not at all felt. If anything, you’d think that all this weird ghost shit would mess the kid up even more.

When Marnie Was There is nice. Sensitive, artistically minded young people will likely eat it up, which is fine, since they’re the movie’s main demographic. Taken as the punctuation mark on Studio Ghibli’s oeuvre, it’s underwhelming. Taken on its own terms, it’s … still underwhelming, but significantly less so.