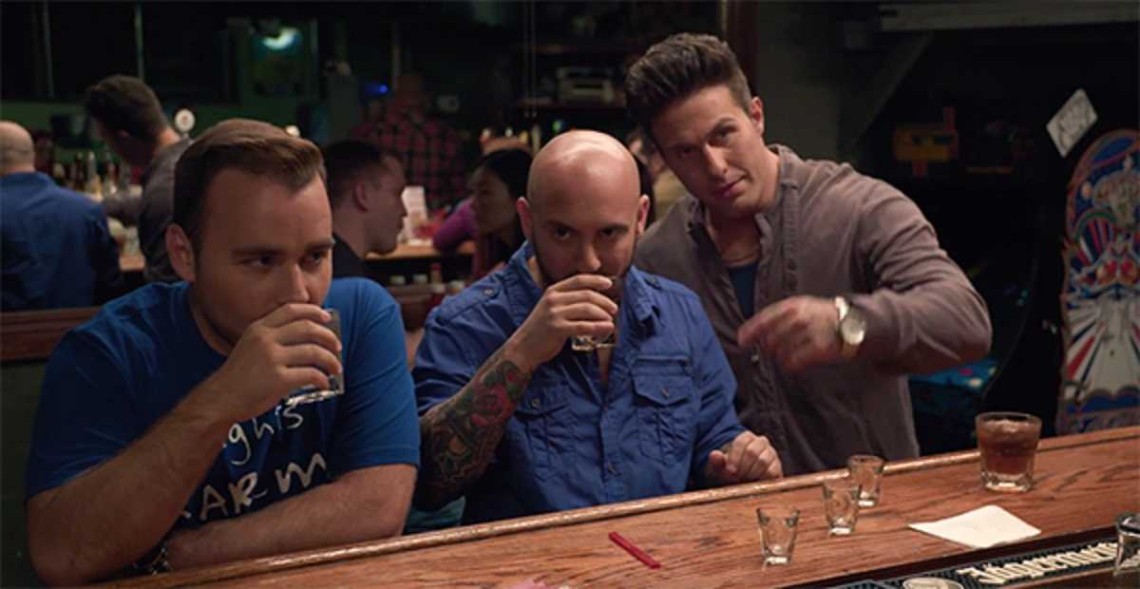 What Now, Ash Avildsen’s debut as director, writer, and actor, explicitly invokes the name of Entourage only once. But every frame of this nigh-on unwatchable film is suffused with that ghastly program’s regressive gender politics, brutal absence of wit, underlying mean-spiritedness, and prevailing tone of proud douchery. The premise of Avildsen’s 100-minute assault on good taste bears a striking resemblance to that of Entourage — a pack of Neanderthals ranging from merely thick-skulled to irritating to despicable trolls L.A. for tail and a shot at the big time. But What Now piles on progressively worse ideas until the end product is a hateful, exhausting, and occasionally baffling monstrosity all its own.

Naturally, Avildsen and the feminine hygiene product named DJ that he portrays would be deeply flattered by the comparison to Vinny Chase and the boys from Queens. The trio at the core of What Now were clearly raised on a steady diet of Entourage, repeated Swingers viewings, and hardcore pornography. In the sparse cranial recesses of roomies DJ, Joey (Joseph Cassiere), and Bruno (Lorenzo Antonucci), the words “BROS BEFORE HOS” have been permanently burned as if from a cattle-brand. Nothing and nobody comes before their fellow adventurers on the high seas of puss-ay, despite the fact that the guys’ banter consists primarily of questionably good-natured insults, and that they all mooch off of has-been rapper Murda B (Bizzy Bone). (This time, Vinny Chase is relegated to deuteragonist status, because who wasn’t begging to get more face-time with E and Johnny Drama?)

Our heroes have hit dead ends in their lives. DJ dreams of attaining superstardom as an EDM disc jockey, but must pay the bills by hitting ‘play’ on the soundtrack at a strip club called Pink Lips. Bruno works as hired muscle for Pink Lips, biding his time until he makes his big break on WWE Raw. Joey sells timeshares to suckers over the phone, visions of power lunches and A-list client meetings dancing in his bald little head. They vow to turn their fortunes around by downloading an app very similar to Tinder that is nonetheless clearly demarcated as not being Tinder, and bringing the hunt for sexual partners into the digital age.

For What Now, its fraught and inconsistent relationship with technology is the first road bump on a road made up entirely of bumps. Because subtext is for cowards, Avildsen loads his film with awe-inspiringly obvious narration such as “Everything’s more convenient, but does that really make it a better experience?” as well as the following nugget: “Our generation’s obsessed with self-validation. I’m just concerned with getting my parking validated, with the budget I live on!” Though Avildsen outwardly resembles a young human man, he doles out voice-overs like one of the cardboard parents from Footloose, convinced that the twin evils of social media and online dating have converted decent, fuckable women into narcissistic, vapid bubbleheads. The irony of this charge is almost too much to bear, and that’s without taking the baldly hypocritical ending into consideration. The guys live happily ever after — with women they met on Not-Tinder! Even as he trots out one last adolescent diatribe on the corrosive forces of the Internet via voice-over, Avildsen illustrates that the app performs its desired function by forging lasting relationships. One gets the impression that he has not spent too much time thinking about the basic mechanics of his script. Presumably, he was busy chilling with his bros, as is the wont of a bro. 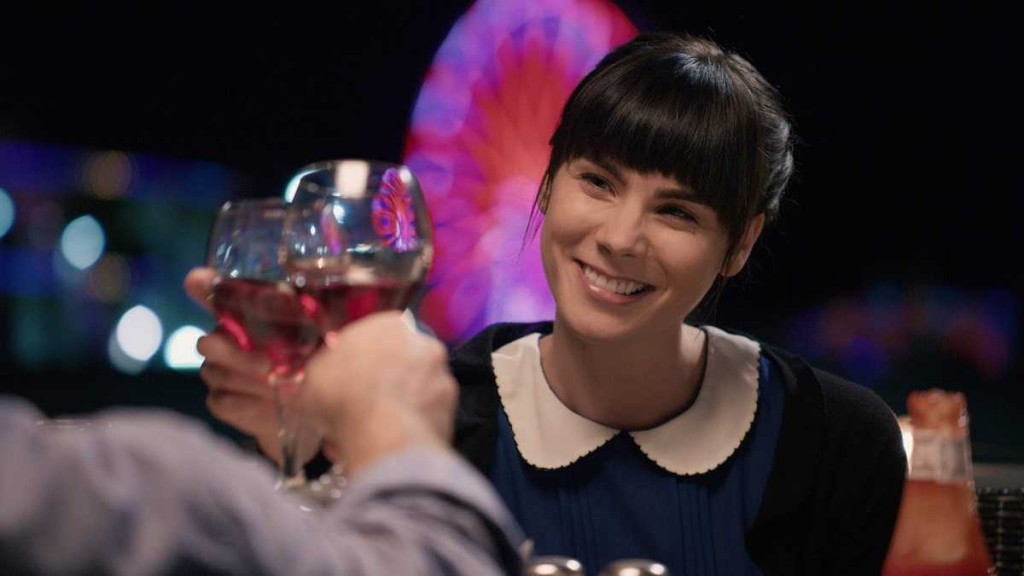 The blithe disregard for simple logic isn’t confined to that scene, either. When a young woman lashes out at her boyfriend for “liking other bitches’ pictures” on Instagram as if she’s not enough for him, he turns the situation around by accusing her of wanting more as well, by virtue of appending so many hashtags to her numerous posts. It doesn’t make a lot of sense, but whatever, fuck it. Whatever, fuck it might as well be the film’s mantra. Inexplicable late-in-the-game cameo from Law and Order: SVU star Ice-T? Whatever, fuck it! He’s gonna perform a nu-metal-tinged cover of Jay Z’s “99 Problems”? Whatever, fuck it! No fewer than six different montages, including a bar-games montage, several strip club montages, a head-shaving montage, and what I can only describe as a “selfie-taking montage”, in which five adult men prance around a mansion snapping cute photos of themselves? Whatever, fuck it! An A&R rep from what I assume is Deus Ex Machina Records appears from nowhere in the final minutes to offer DJ the DJ a six-figure contract for his aurally offensive fusion of hard rawk and fist-pumping EDM? Whatever, fuck it! He actually walks out in the middle of this magical contract-signing meeting, just to go convince a woman to be in love with Joey? Whatever. Fuck it. What Now exists in a world unencumbered by reasonable human behavior.

What Now fails in more banal ways, too. The production values are on par with late-night Skinemax, and the film’s main notion of comedy is that thing where a character pretends to be very angry at another character, only to then burst out in laughter and say some variant of “I’m just playing witchu, dawg!” (This happens four or five times.) Avildsen’s a diligent filmmaker, I must concede that. He takes care to promulgate backwards stereotypes with equal opportunity, directing his masculine condescension towards all characters unfortunate enough to cross his path. A date with a young goth woman ends with DJ mansplaining how better to be a goth to her. She retorts by asking him what sort of music he likes, and then drops the following zinger: “I hate EDM! To me, it stands for Extremely Dumb Music.” When we see her next, she’s agreed to fellate a member of Asking Alexandria in exchange for a tag in a Facebook post. The band member celebrates this imbalanced-sounding deal by triumphantly informing her that she’ll be the third groupie to work his pipe that evening. He intends it as some form of sexual humiliation, and the film sickeningly, implicitly reaches out for a high-five from the viewer. A slightly plump woman is introduced for the sole purpose of providing a receptacle for fatty-fat jokes. In a bit of unintended symbolism, she never speaks. Later, Bruno suffers the ultimate indignity by unknowingly hooking up with a lovely, friendly transgender woman at a nightclub. After discovering the true nature of her gender identity, he leaps into a swimming pool in an attempt to purify himself, but he can never truly cleanse his shame. In this respect, all the gum-flapping about EDM and Tinder and youth-skewing nonsense notwithstanding, the film is extremely old-fashioned.

Movies as staggeringly free of value as What Now dredge up big existential quandaries. They force a critic to reexamine what factors compelled him to devote his life to the field in the first place. Ideally, film criticism comes from a place of love and passion, the desire to share films that delight or move the critic with the rest of the world. On the rare occasion that a film like What Now comes along, however, that love is supplanted by a sense of duty to protect. Please, spare yourselves. I don’t want What Now to hurt anyone more than it’s already hurt me and the two other users on Letterboxd who have logged the film. Hold your loved ones close. Cherish them. May you live a warmer and more fulfilling life, safe from What Now.