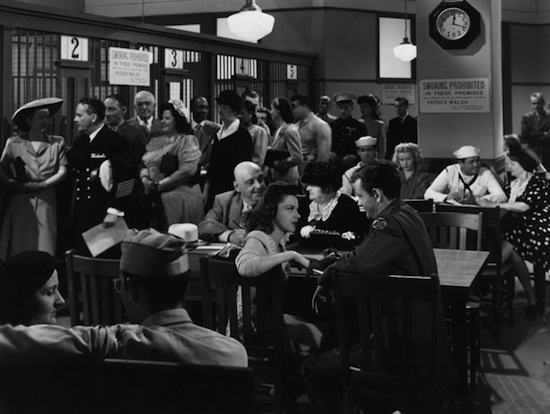 Vincente Minnelli is justly known for his florid, sweeping musicals, but for my money, the most complete expression of his formal mastery is found in dramas like Some Came Running and this 1945 romance starring Robert Walker as a soldier on 48-hour leave in New York and Judy Garland as the woman who instantly steals his heart. The clock of the film’s title refers to the place where the two meet for their first date, but the film as a whole takes on the metronomic, unstoppable movement of time as the two young lovers race against the soldier’s short furlough and struggle to figure out whether to stoke their spark into a flame or let it die out and spare themselves the pain of possibly being torn apart by his redeployment.

At times it seems as every film shot in New York must be seen as some kind of paean to the city, but few films embody that notion as vividly as The Clock. The couple’s whirlwind tour around familiar tourist sites and off-the-beaten-path dives carves out a dreamy map of the city, one still filled with fog and “Here there be dragons” sketches but nevertheless intricately plotted among its various markers.

If Minnelli’s aesthetic vision is so exact that New York City comes to be as the internal gears of a clock, he never subsumes the raw and complex emotions of the melodrama, with its deft mixture of idealistic love and realistic, mature caution, into a clinical masterclass. A bit too timely for a crowd then itching to move beyond the solemn reminders of wartime, The Clock is nevertheless one of Minnelli’s great, lasting achievements, and it’s as good a showcase for Garland as the previous year’s Meet Me in St. Louis.